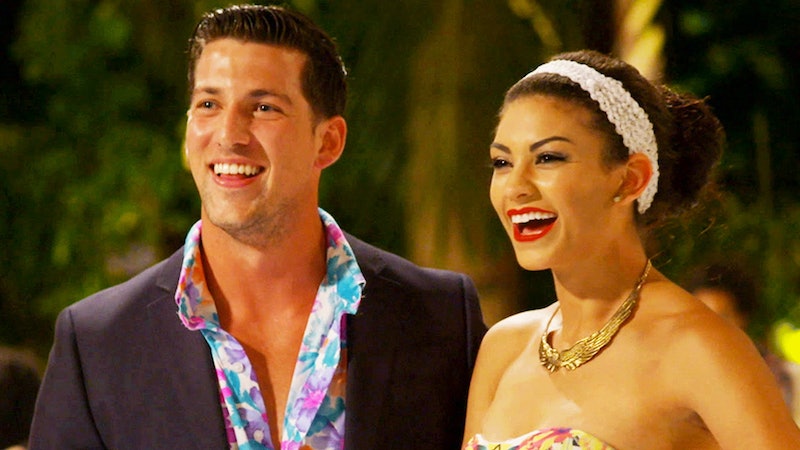 I hate to admit it, but I get far more enjoyment out of watching MTV's Are You The One? than anyone should. I didn't want to, but last season, my mom (of all people) ended up getting hooked and dragged me in after her. Pretty quickly, I learned about the show's downside: Just as you get to know the cast, your favorites end up finding their matches and end up disappearing off to the Honeymoon Suite, never to be heard from again. And it's the worst. This is exactly what happened to Tyler Pratt and Paris Eike, my favorite Season 2 couple. Now that the truth booth has confirmed that they're meant to be, they have vanished, and I'm super disappointed.

But for those of us who believe in true reality TV love, I have good news, too. It seems like they may end up being the new Ethan and Amber — an adorable couple from last time around who are not only engaged but are also expecting a baby together. Although neither Paris nor Pratt have gotten too specific on social media (probably per MTV's request), it definitely sounds like now that the show has filming, their relationship is still going strong. Pratt's definitely more vocal than Paris is, and to see his posts about her on Twitter and Facebook is making me fall in love with them all over again.

Despite the fact that Paris and Pratt live on different sides of the country (Colorado and Florida, respectively), it seems like they've been making time to be together. This tweet from Pratt could mean anything, but I choose to believe it means that one of them was visiting the other and they woke up together to check Twitter, side by side. Aww, true love!

Meanwhile, Pratt's been vocal on Instagram about his love for Paris, sharing pictures and screencaps from the show at just about every opportunity. With a caption like this one, it's pretty much certain that as of two weeks ago, they were still together.

This picture is super adorable, too — and according to Pratt, it's the first one he and Paris took together as an Official Truth Booth Confirmed Couple. Plus, there's Curtis looking sketch on the side. "We've both made mistakes in our relationship but no matter what, I want you to know that I love you more than anything," Pratt wrote. All together now: Aww.

More like this
All The Clues Gillian & Edgar Are Still Friends After 'Temptation Island'
By Brad Witter
JoJo Siwa’s Sweet IG Post Seemingly Confirmed She’s Back With Her Ex
By Brad Witter
Kourtney Kardashian Broke Her Engagement Ring & Cried In Her Closet For Hours
By Jake Viswanath
Scott Disick’s First Time Around Kravis Was “Awkward,” To Say The Least
By Jake Viswanath
Get Even More From Bustle — Sign Up For The Newsletter