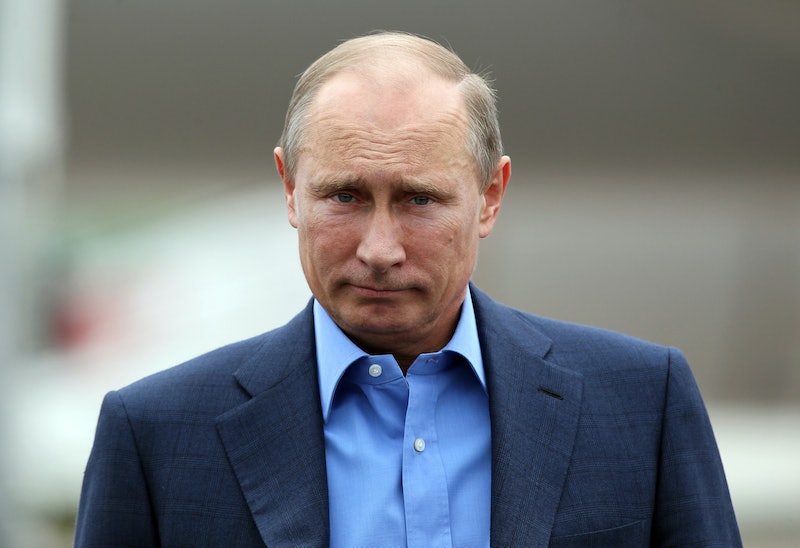 Self care is important. You need a decent amount of R&R to get in the right mindset for the work week, and ever-increasing challenge of getting rest should certainly factor into your life choices. In an example-setting effort on living a balanced life, Russian President Vladimir Putin left the G20 summit early to sleep.

Never mind that Putin had just faced intense scrutiny from Western nations for Russia's alleged support of separatists fighting in Ukraine. No, Putin became the first world leader to leave Brisbane because he needed to resume his status as a certified Russian manly man come Monday morning. He commented to the RIA Novosti news agency:

We need nine hours to fly from here to Vladivostok and another nine hours from Vladivostok to Moscow. Then we need to get home and return to work on Monday. There is a need to sleep at least four to five hours.

Listen, Putin, I feel you. Sleep deprivation is the absolute worst. But I operate on an average of about four hours of sleep per night and still manage to show up to class, work, and the bar. If I can do it, I think you could stick around just a little bit longer to clear up lingering tensions on that whole Ukraine thing.

The G20 summit, originally a meeting or world leaders to discuss economic issues, has been taken over by the Ukraine crisis. Russia flatly denies that it is still sending in troops or aiding the pro-Russia separatists in the country. The entire West disagrees.

Throughout the G20 summit, leaders from Western nations expressed concern with Moscow's continued involvement in eastern Ukraine. Australian President Tony Abbott, who hosted the event, threatened to confront the Russian president about the Malaysian Airlines flight shot down over Ukraine in July. Canadian Prime Minister Stephen Harper supposedly told Putin to "get out of Ukraine" as they shook hands. David Cameron, the British prime minister, has publicly accused Russia of "bullying" the smaller nation.

But Putin is tiiiiiiiiiired. And you know how grumpy he gets when he's tired!

Nah, I have the sneaking suspicion that Putin wasn't just looking to grab some extra Zzz's. Wouldn't someone who travels so much have figured out some way to comfortably sleep on a plane for 18 hours? Putin, this time I think you've pulled a Karen.