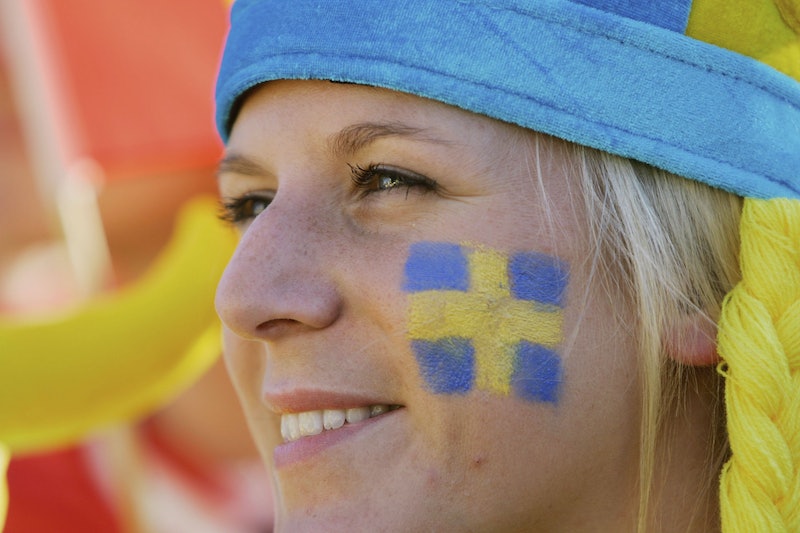 Another day, another reason to love the Swedes. As we learned on Monday, Swedish officials are seriously considering labeling video games that contain sexist portrayals of women. This isn't just a great move, it's a precedent setter; while many countries are still fighting for equality on very basic levels, Sweden has gone for gold and begun an initiative that slams sexism right in its comfy pop culture bubble.

This is all no surprise to me because in college, I fell in love with Swedish culture.

Don't get me wrong. I am a child of the world and there are many peoples and places that have a piece of my heart. But the one region that truly makes me wonder if I was somehow switched at birth is Scandinavia.

My college's location in Santa Barbara, California was a veritable haven for Swedes, Norwegians, and the Danish, providing them the constant sunny weather and beach lifestyle they didn't really experience back home. I met some of my best friends there, and I learned quite a lot about Scandinavian culture. Here are five things that might make you wish you were Scandinavian as well.

1. The fight for gender equality isn't even a question.

Which means, quite frankly, the Nordic countries are killing it.

There's a strong, consistent battle for equality of all sexual orientations and ethnicities as well, which is inarguably glorious, and in my personal experience, the women who are the product of these countries are strong, opinionated, and driven because the culture doesn't encourage them to fade into the background.

Given this, the fact that the gaming industry, infamous for its misogynistic tendencies, may be held to more egalitarian standards in Sweden is not surprising.

2. Taking shots during dinner is par for the course.

Snaps is an incredibly strong liquor consumed largely during festive dinners. Sweden makes about 20 brands of it and is therefore the leader in its production. It's seen as a digestive aid and let me tell you, it'll put you under.

To illustrate the point, let it be known that I couldn't keep up with my best friend Johan's parents during New Year's. Shout out to Per and Christel though, I mean really.

3. Education isn't a privilege, but a right.

Most colleges are free to attend throughout the Nordic countries, thanks to a national mentality that prioritizes equality and the idea that the country as a whole benefits from a more educated populace.

4. Seriously, have you seen these people?

Scandinavia has a reputation for its beautiful, healthy people. According to an article by CNN Health, "the Nordic diet and way of life produces low rates of obesity (as low as 8 percent, depending on the country)."

Health care is also universal, because this is heaven we're talking about, after all. Perhaps most impressive though: three out of Forbes' top five happiest countries are Scandinavian.

Maybe it's just because I live in California now and ain't no snow flurry got time for that, but I'm obsessed with pretty Swedish winters. So, fellow snow bunnies, rejoice for Scandinavia is the land of your dreams.