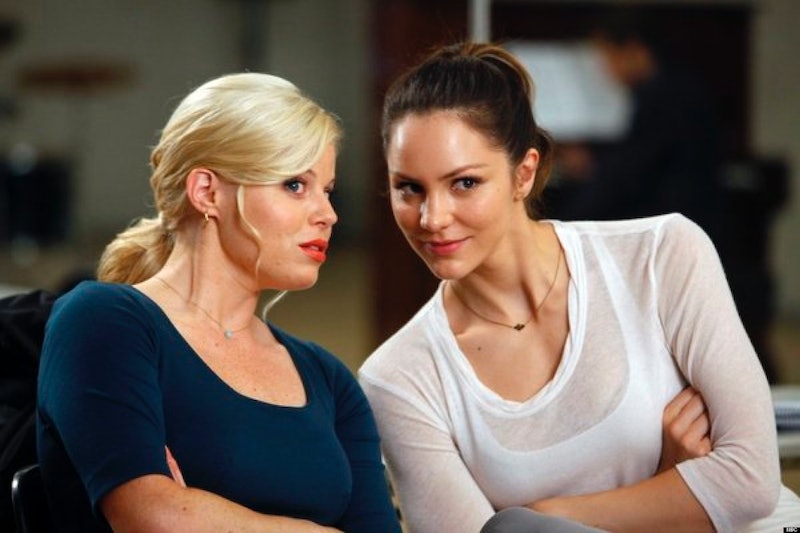 Being just the right mix of overly determined and incredibly awkward is the perfect recipe for audition disaster. You would think after over a decade of standing up in front of strangers and belting mismatched clips of show tunes that I would eventually get a handle on myself, but literally 72 hours ago I very confidently stood up at an audition, opened my mouth to sing, and promptly realized that I had accidentally printed sheet music four keys higher than the key I'd practiced it in. I could have just stopped and said something right then, but instead I proceeded to deafen all of the members of the casting team and everyone in a four block radius attempting to belt it anyway. Awkward auditions: They can (and very likely will) happen anytime, anywhere, to anyone.

That's not even half as bad as some of the audition horror stories I've got: I've kicked off shoes in dance calls, spat on casting directors during monologues, walked out of a bathroom with my dress bunched into the back of my tights. I once left the parking lot after an audition, cussing myself out for doing something stupid and realized that the director was watching me in open-mouthed horror as I rolled away with—you guessed it—the back windows of my car wide open. I would go on, but I'm afraid if I say more, I'll get blacklisted from performing anywhere for life.

The thing is, auditions are just awkward places in general. Everyone is keyed up and at their maximum manic potential, and if something bizarre doesn't happen while you're there, then...well, what was the point in even going anyway? I think it's important to remember, in the face of all the anxiety that at their heart, auditions are a spectator sport. Here are all the awkward situations that can and will happen to you:

And then proceeding to painfully avert your eyes for the next two hours so you don't have to fumble around awkwardly trying to remember how you know each other.

Someone Has The Same Audition Piece As You

And naturally you're scheduled to go right after them. Oh, and they're amazing. HAHAHAhahahaha *sob* help.

Someone Starts Warming Up Aggressively Within Three Feet Of You

Despite the fact that you're in an open hall FULL of space, this person feels the pathological need to make sure you know they're doing a song from Rent and a monologue about running someone over with their car. Over. And over. And over.

Put down the honey, honey. I once watched a girl down half a bottle, only for the casting director to then walk in and announce that too many girls had shown up and none of us would be singing that day. (If I were a nicer person, I wouldn't still be laughing about it.)

You Leave Your Music With The Pianist

Something about the exhilaration of finishing a song without a hitch dissolves your IQ about 100 points. You're lucky if you remember to walk in a straight line out the door let alone turn around and collect your sheet music.

Everyone Knows Each Other...Except You

Every local audition you ever attend will inevitably have a clique of people you've never met before who are all best friends with each other and the director and have all these groovy inside jokes. The more they all cackle, the more you wish a hole would swallow you up in the earth so you didn't have to endure one more second of feeling like that kid who eats their lunch in the bathroom.

And oh, how the weirdness spreads in the room like an airborne disease.

The Director Asks You "Do It Again, But This Time..."

Bless the hearts of stage moms and dads. My favorite is when someone's stage parent talks me up to try to get all the "intel" while their actual son or daughter sulks in the corner and I'm like, dude, I just saw this audition on the same Facebook community theater page you did. If I actually knew something useful, would I be sitting here in a public gymnasium with you?

One Of Your Legs Inexplicably Starts To Wobble Mid-Audition

It's always my left leg. Damn that saucy little bitch.

You Entirely Or Nearly Forget Your Monologue

The one time I completely blanked, I was so stunned with myself that I started to laugh. The director was like, "No, no, don't be nervous," and the truth is, I wasn't. I'd just completely forgotten and apparently that was enough to send me spiraling into mania. It is a miracle I get cast in anything, ever.

Someone Asks You What Part You're Auditioning For, Looks You Up And Down And Goes, "Oh, Really?"

Any kind of dance call. It's never not awkward. Even if you're the best dancer there, odds are someone like me is going to lose their footing and trip all over you anyway.

What are you even doing here, random old man? There isn't even a part in this show that is vaguely appropriate for you and yet you are here, looking altogether more of a hot mess than all the people at least forty years your junior in the vicinity.

"I never know what to say my voice part is, because I can belt AND hit high notes. It's so weird being classically trained and doing musical theater!"

"And then Idina told me to never give up on my dreams."

So on and so forth until my eyes roll all the way into the back of my head.

You Sing Obnoxiously In The Car The Whole Way Home

Belt away the sadness. Eh, there's always next weekend when you'll do the whole thing all over again.