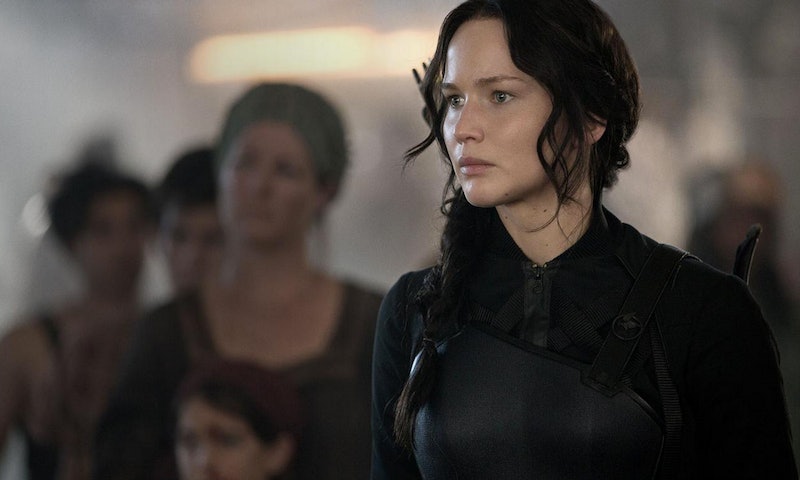 As Mockingjay approaches movie theaters worldwide, Katniss Everdeen once again takes center stage. This is for good reason beyond just her central role in a major blockbuster, mind you: She's one of the most compelling leading characters the movie business has got. We've explored the wonders of her heroism before, but now we must ask ourselves the real tough questions. We have to ask: What Hogwarts house is Katniss Everdeen in?

One of the hardest things about parsing through Katniss' house identity is that one of her most defining characteristics is her loyalty. Loyalty and family allegiance have their own manifestations in each of the houses, and those manifestations can often overlap — it's not a perfectly crystalized system. I think that Katniss could easily be argued for Gryffindor, Hufflepuff, or Slytherin — she is absolutely not a Ravenclaw — because she's a complex enough character that we see elements of all of these houses throughout the book. She's alarmingly rash plenty of the time, which is a purely Gryffindor trait. She's cunning and resourceful. She is endlessly loyal.

So there are many possibilities for her that I could be persuaded to, but for the purposes of this argument I'm gonna land on one. I am going to argue, to guaranteed protestation, that Katniss is a Hufflepuff. Gryffindor is the next-tier possibility I'd categorize her as, because that aforementioned rashness and her undeniable bravery are two of the most repeated and steadfast Katniss traits.

But it's the reasons behind that rashness and bravery that move Katniss from Gryffindor over into Hufflepuff — and it's part of what makes her such an interesting hero, and what sets her apart from the Captain America types who are often in the hero position. Almost every single time Katniss Everdeen makes a rash decision it is to protect someone she loves. The first example of this that we see is the catalyst for the whole series: She volunteers for the Games to save her little sister from certain death. We also see this in many of her interactions with Rue, most notably her reaction to Rue's death — a rash decision for sure, to give a Games contestant a proper memorial while the entire country watches.

It's these moments that get cited in Mockingjay — both the book and in the movie — when the rebel forces are brainstorming how to present Katniss as the Mockingjay. It's clear that Katniss is not, by her nature, a leader — she has a knack for inciting mass feeling, but almost all of the moments that most inspired Panem came not just through Katniss herself but through watching Katniss feel for someone else. Sometimes that "someone else" is all of Panem, but more often than not it's a particular person or group she feels intense loyalty to.

One key scene that illustrates this takes place in Catching Fire when she tries to get Gale to gather up their families and run away with her. They're all set to escape the Capitol's pull — until Gale finds out that there have been uprisings happening all through the districts. He immediately backs out of the plan, citing their duty to the revolution. Katniss is all for the Districts no longer being under Capitol rule, but until some very specific (and possibly spoilery) moments in Mockingjay it isn't her motivation. Katniss' motivation is almost always centered on a specific person or group of people she cares about: Prim, first, then Rue, Peeta, Gale, etc. The thing that (Mockingjay Part 2 spoilers) ends up tearing Katniss and Gale apart in many ways stems from the fact that Gale will (and does) put the good of the rebellion over the people he (and Katniss) care about. This is, once it harms someone Katniss loves above everyone, a deal-breaker.

As the Hufflepuff House welcome letter in Pottermore declares, "like [their] emblem, the badger, [Hufflepuffs] will protect [themselves], [their] friends and [their] families against all-comers."

There is another key element to Katniss that screams Hufflepuff. Though the Sorting Hat doesn't exactly delve into how each house reacts to hardship, Katniss' relationship to her poverty reads very Hufflepuff. Gale spends a lot of time before the reaping in the first Hunger Games book talking about his dreams of escaping the realities of their lives or the districts rebelling, but Katniss dismisses these — Katniss is nothing if not steadfast and toiling in her efforts to keep her family afloat. She thought she was going to continue toiling in this same position for the rest of her life, and though she was hardly fine with that, she was steady in it. She was going to keep going, endlessly hardworking, endlessly focused, endlessly committed to giving Prim a better life.

This is era of Katniss' life is crucial: When looking at a hero you have to look at how they behave before their call to action as well as to what they looked like in the middle of the chaos. Katniss' rashness didn't manifest until the moment Prim's name was called in the reaping — AKA the moment her loyalty was first tested. She aced the test, and she aced it in a way that could be Gryffindor — but within the context of Katniss it screams Hufflepuff.

Katniss is a complexly-built, layered character — categorizing her is not easy. That's part of the fun of it, really. And when you get down to it, it's her uneasy categorization that makes her such a dynamic hero.