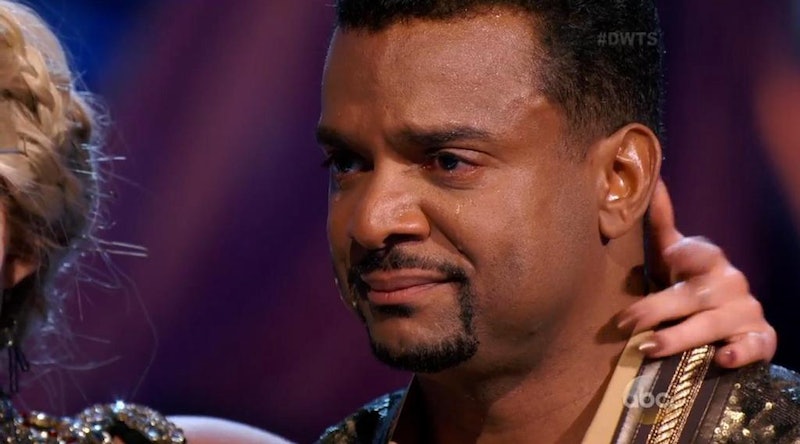 Fans of Dancing With the Stars were saddened to learn earlier this week that Alfonso Ribeiro might not be able to dance after a pretty serious back injury. But not only did Ribeiro do two numbers on Monday night; he rocked them. Ribeiro had a painful few weeks after he injured his groin doing his signature Carlton dance. Then, overcompensating for his other injury, he hurt his back this week during rehearsals. "I was doing a bunch of lifts just with my upper body and my back locked up," Ribeiro explained. "I started to feel incredible pain in my lower back and every movement hurt more and more."

He was in a lot of pain, and he was unsure if he'd have to leave the competition all together. Fortunately though, he pushed through the pain and came out on top. After his first performance of the night, Ribeiro was literally crying in pain. But the judges had nothing but words of encouragement. "You're a fighter and you're going to keep going," Julianne Hough assured him. "You can dance!" Len Goodman praised him. The judges all gave him nines, which is a high score on a good day, let alone when you danced with an injury.

Ribeiro was still doubtful knowing he had another number to do. But ultimately he focused on his goal of staying in the competition. "I've wanted to be on the show since the very beginning," he said. "I'm a fighter. I'm not a quitter."

And it's a good thing he didn't quit, because his second performance garnered a 39/40 and enormous praise from the judges. "You're working through that pain and my admiration knows no bounds," Len Goodman said after the second dance. Ribeiro and his partner Whitney Carson made it through the elimination and will compete next week during the finals. Hopefully by then Ribeiro will have made a full recovery.

More like this
Kim Kardashian Remembers Her Last Words To Death Row Victim Brandon Bernard
By Jake Viswanath
'The Kardashians' Showed Kim Getting Her Bar Exam Results While At Red Lobster
By Jake Viswanath
Trace Is Dropping Ominous Hints About 'The Temptation' Island Reunion
By Kadin Burnett
Everything To Know About A Potential 'Love On The Spectrum U.S.' Season 2
By Gretchen Smail
Get Even More From Bustle — Sign Up For The Newsletter