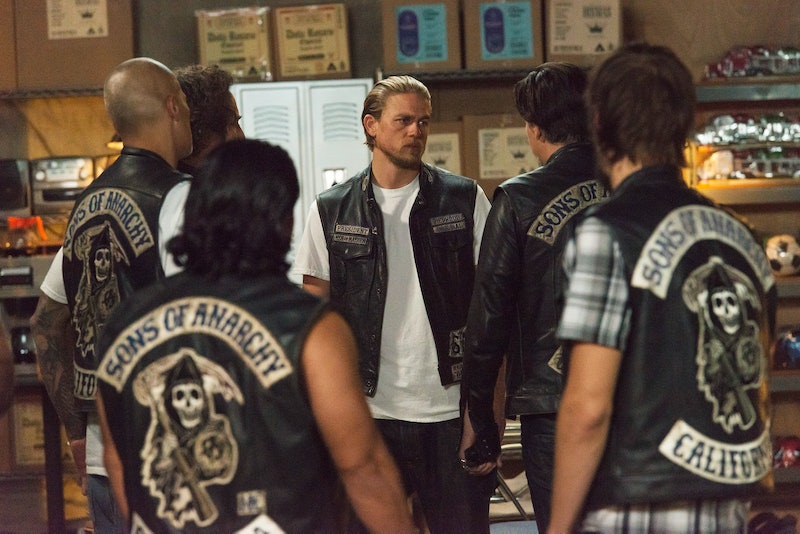 It's been a long and winding journey, but after seven glorious seasons, Sons of Anarchy is preparing to ride off into the sunset, leaving all of its dedicated fans with a Grim Reaper-sized hole in our hearts. Of course, this just means we have to cherish the precious moments we have left with SAMCRO all the more. But how many SoA episodes are left exactly? I am sorry to report that the answer is a measly three. You heard me… three. That's all we have left with our merry band of motorcyclists, and quite honestly I'm nowhere near ready to say goodbye.

Granted, I've always been pretty terrible at letting go of things (regardless of how many Disney songs are centered around the concept). So I knew right from the start that this was going to be tough. However, the good news is the series still has some serious ground to cover plot-wise. Now that Jax knows the truth about Tara's death things should really start to unravel not just for Gemma, but the entire club as a whole. And while Kurt Sutter is doing a good job of keeping the final remaining episodes pretty close to the vest (or the cut in this case), there are a few SoA teasers out there that could shed some light on what lies ahead.

Here's what we know about the last three episodes:

The Redwood Originals Will Come Under Fire

According to Tuesday night's episode synopsis of SoA's "Suits of Woe," the entire SoA organization is going to "bear down" on the Redwood chapter. This more than likely has to do with the fact that Jax killed Jury White for what basically looked like no good reason. We knew that issue wasn't just going to go away, and now it seems President Teller is going to have to answer for his sin. Could this mean the end of the club for good?

Jax Will Find Out the Truth About Gemma

Right now all Jax has to go on are the words of his five-year-old son, so his suspicions are speculative at best. But all of that is going to change and soon. Not only does this week's synopsis say that Jax "comes face to face with an extremely unpleasant reality," but the promo itself indicates that he'll finally learn from Unser about how Chris Dunn (aka Tara's "murderer") wasn't even in the state the night Tara was killed. There's just no way Jax won't put this all together.

There Will Be Just As Many Tears Shed As Blood

In a recent interview on Larry King Now, Theo Rossi (Juice) and Kim Coates (Tig) opened up about the final three episodes and how they're going to leave you reaching for those tissues. "Eleven, twelve, and thirteen are like no other" Coates revealed. "It just gets I think worse and better and the whole last three shows are epic, epic drama. And I think thirteen’s not gonna have a dry eye in the house.” In other words, be afraid. Be very afraid.

More like this
50 Years After Creating Her Alter Ego, Angelyne Is Still Driving That Pink Convertible
By Gretchen Smail
Kaley Cuoco & Tom Pelphrey Just Made Their First Public Appearance As A Couple
By Hugh McIntyre
'Ghost In The Shell: SAC_2045' Was Only Supposed To Last Two Seasons
By Kadin Burnett
What’s New On Netflix: 'Stranger Things' & 'Somebody Feed Phil' Return
By Arya Roshanian
Get Even More From Bustle — Sign Up For The Newsletter