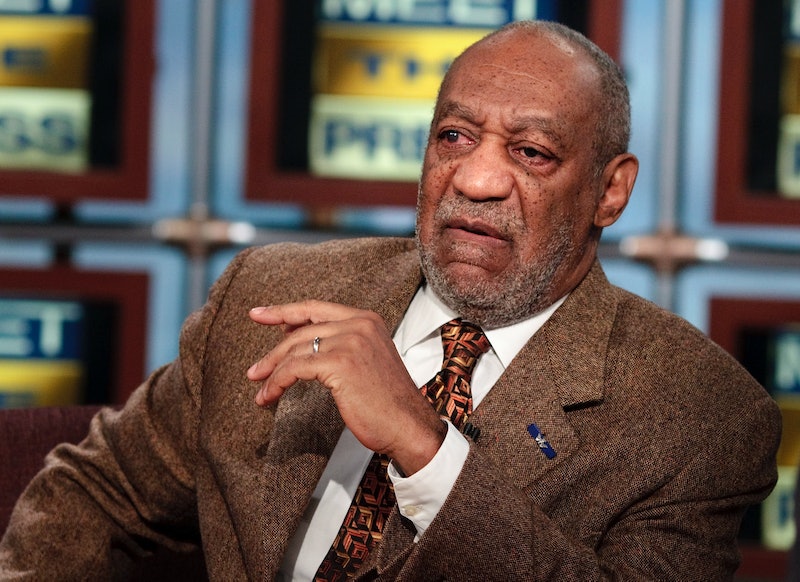 Well, this is unbelievably awkward. In case you haven't heard, Billy Cosby, beloved TV father, has been facing some very serious, decades-old rape allegations recently after a viral video of comedian Hannibal Buress calling Cosby a rapist made its rounds on the Internet. The story wasn't old, but the public outcry against it was new, prompting Cosby's victims to come forward, bolstered by the support of the public, to tell the stories that had been ignored for so many decades. Cosby has thus far refused to comment on the allegations (only thus far releasing a statement via his lawyer denying the allegations), leading people to look to other sources for further information — such as a 1989 comedy routine unearthed by The Village Voice. In it, Cosby jokes about drugging drinks and it's every bit as awkward to listen to as you might imagine.

In the two minute clip from his 1989 album It’s True! It’s True!, the actor discusses being told by a 13-year-old about a drug called Spanish Fly. "There’s this girl, Crazy Mary. You put some in her drink she’ll be like blaaaaaaargh," says the child of the drug in the bit. There's a disturbing reference to going to a party, seeing a group of girls in the corner, and noting that with some Spanish Fly that corner would be "lit up." The piece then ends with an exciting trip to Spain to pick up more of the drug with an almost obsessive, fanatical devotion to it that overshadows anything else the country might have to offer.

Almost as disturbing as the subject matter is the format in which it was delivered. It would be much easier to say, "It was just a comedy routine! Obviously he was joking," had the renewed interest in the allegations against him not been triggered by a comedy routine to begin with. The fact that drugging a woman's drink isn't something to be joked about goes without saying, but with everything that is going on then it becomes even more horrifying to realize that Cosby made a joke like this on a 1989 album when victim Joan Tarshis recently spoke out about having been assaulted by Cosby as early as 1969. So while this routine does not prove anything one way or another — it's in bad taste, but if comedians had done everything that they joked about then most of them would be in prison right now — it's certainly disturbing to listening to.

Check out the comedy routine below.

More like this
Spice Girls’ Net Worth: The Richest Member Is Wealthier Than The Rest Combined
By Hugh McIntyre
Cardi B Explains To David Letterman Why She Uses Her Star Power For Politics
By Jake Viswanath
The Very Best Quotes From Dr. Taylor Swift’s NYU Graduation Speech
By Grace Wehniainen
Watch The Dramatic First Trailer For Netflix's Jennifer Lopez Documentary
By Alyssa Lapid
Get Even More From Bustle — Sign Up For The Newsletter