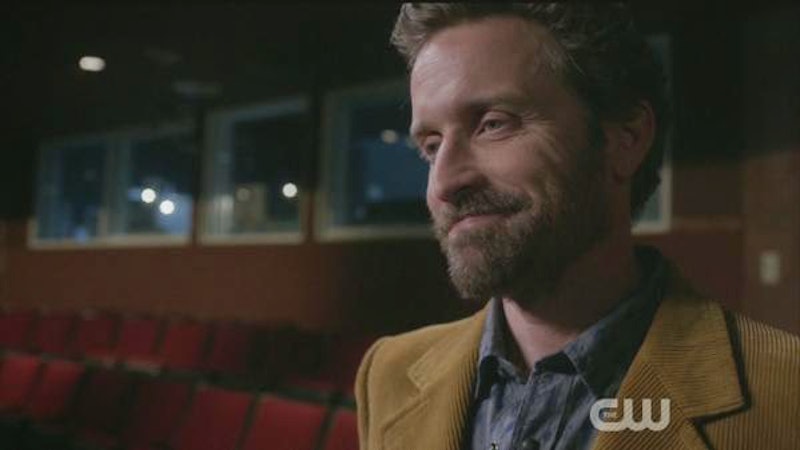 Supernatural fans, it finally happened. In the CW series' 200th episode "Fan Fiction," former prophet, and writer of the book series based on the Winchester brothers, Chuck Shurley finally returned to Supernatural as the "publisher" attending the musical based on his own book series. While he only appeared on screen for no more than 5 to 10 seconds, Chuck's cameo in the episode was a huge moment for fans because the last time we saw Chuck, he mysteriously vanished into thin air at the end of the Season 5 finale "Swan Song." Many fans believe that the reason Chuck disappeared without a trace and then returned without anyone knowing is because he is actually God. Whether or not that is actually the case (which I really hope it is), why did Chuck wait so long to return? And more importantly, will Chuck reunite with the Winchesters?

As far as I can tell, Chuck's cameo in this particular episode, rather than any of the others this season, was clearly done as a thank you to loyal fans who have been watching the series for all ten seasons. But there has to be a better reason he appeared in Season 10 rather than any of the previous five seasons that he missed. And he has to, at some point, reveal himself to the brothers, right? Right?

Here's what I think. There's a reason the Supernatural writers reveal what they reveal and hide what they hide. They obviously have a plan with Chuck or they would not have had him appear on the show at all. For example, we have yet to see Rowena do anything else in the series except sit in a big chair in a big house with dead people on her ceiling, but clearly we know she'll become much more important down the line. So I'd like to assume that must mean that Chuck's appearance will also be addressed later in the season.

Perhaps Rowena and Chuck's storylines are actually intertwined. Since we know basically nothing about Rowena, it could be argued that she will end up being one of the Winchester brothers' most formidable foes, one that might even require Chuck's help. Though why Chuck wouldn't return to help the brothers with Lucifer, the Leviathins, Eve, and the fallen angels is beyond my comprehension.

I truly believe that Chuck will eventually reveal himself to Dean and Sam because, let's be honest, at this point he just has to do it. He disappeared for five years and didn't give the brothers any reason why. While they haven't really looked that hard for the supposed God, it still has to be extremely strange to them that this guy is just gone from their lives.

Even if Chuck doesn't have much to do with Season 10's major storylines, he has to answer for not returning, for putting the guys through such strife with no aid, and he has to finally help them when they really need it the most. I do think it's more than a coincidence that Chuck reappears in the very season that Dean became a demon and, even though he's back to his human form, he still has that Mark of Cain that could easily turn him back into the beast he tried so hard not to be before he went all black eyes on everyone.

My final theory: Metatron figures out a way to bust out of his prison and tries to claim the role of God. Since it took so much effort from everyone in Team Free Will to take him down the first time around (including Dean's death), perhaps Chuck will finally reveal himself to Dean and Sam to silence Metatron for good and take his rightful place in Heaven.

Or maybe Chuck's cameo was just that just, a cameo, for now. Then, when the series eventually ends, that's when Chuck will finally reveal himself to be God and actually help the Winchester brothers. Dear God, or Dear Chuck as it were, please don't let that be the case.