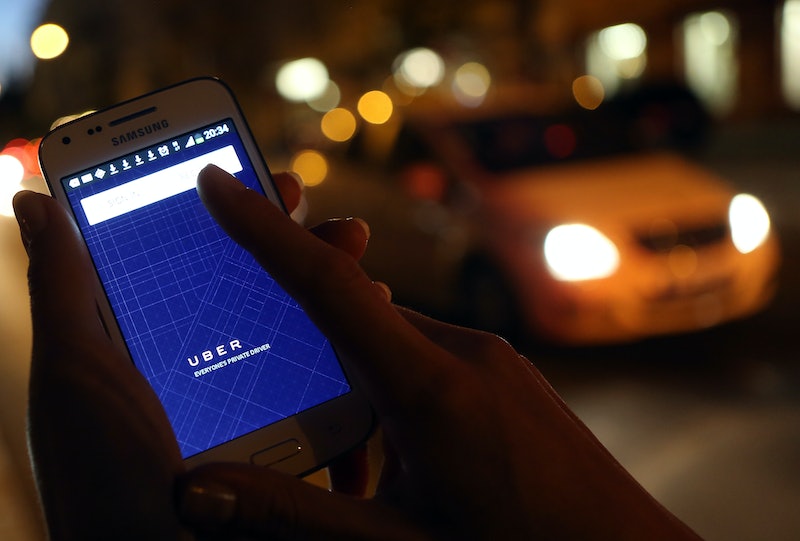 It seems like Uber has a woman problem almost as big as the GOP's. The popular ride-sharing company has come under fire lately for sexist ad campaigns — including one in France that sells Uber drivers as part of an escort service for men — and failing to curb sexual assault committed by its drivers. Uber's apparent disregard for its female drivers and passengers has caused some prominent tech journalists, including PandoDaily Founder and Editor Sarah Lacy, to disown the trendy company. In turn, Uber reportedly wanted to smear journalists like Lacy by prying into their personal lives — at least, that was what the company thought it should do.

BuzzFeed News reports that Uber Senior Vice President Emil Michael made some unfavorable comments at a private, lavish dinner in New York last Friday. As BuzzFeed Editor-in-Chief Ben Smith explains, the dinner was believed to be — by Uber execs — off the record; however, no one relayed that instruction to the BuzzFeed editor who was invited to attend the event with a fellow New York–based journalist. So everything that was on the dinner table was, essentially, on the table.

The biggest revelation of the evening? The proposal of spending "a million dollars" on a team of investigators to dig up dirt on tech journalists who dare say anything negative about Uber. Yes, really — good, old-fashioned smear campaigns.

Over dinner, [Michael] outlined the notion of spending “a million dollars” to hire four top opposition researchers and four journalists. That team could, he said, help Uber fight back against the press — they’d look into “your personal lives, your families,” and give the media a taste of its own medicine.

To be clear, Michael didn't say the company had this plan in action. According to Smith, it was more of what Uber "should" be doing, rather than what it is doing. When told that hiring investigators to uncover potentially incriminating details about journalists would not be a good look for Uber, Michael reportedly responded: "Nobody would know it was us."

On Monday, Michael released a statement through Uber spokesperson Nairi Hourdajian, contending he thought the dinner was off the record:

The remarks attributed to me at a private dinner — borne out of frustration during an informal debate over what I feel is sensationalistic media coverage of the company I am proud to work for — do not reflect my actual views and have no relation to the company’s views or approach. They were wrong no matter the circumstance and I regret them.

Hourdajian added to BuzzFeed News that Uber has never done any dirt-digging research on journalists, nor does the company believe the personal lives of writers — primarily women writers — is a worthwhile target for Uber. But why would a senior executive of one of the fastest-growing Silicon Valley companies even dream up such an idea in the first place?

BuzzFeed News reports that Michael's paranoid rant was triggered by PandoDaily's Sarah Lacy, a powerful voice in the tech-journalism world and, as it happens, a vocal critic of Uber. In October, Lacy followed-up a 6,000-word article on Silicon Valley's "asshole game" with a post criticizing Uber's new escorting service in Lyon, France, saying it cemented that Uber was just another misogynistic Silicon Valley company fostering a disturbing dude culture.

Lacy wrote at the time (funny enough, she correctly predicted then that all bad Uber PR would come from BuzzFeed):

But the rapidly pulled post out of Uber Lyon proves what every CEO has always known: It’s less about what you say directly and explicitly to employees that creates or destroys a culture. It’s what they take from what you say. And I am not surprised that someone inside the company took Kalanick’s callous attitude towards female riders and comments like “Boober” to mean that shocking level of exploitation and disrespect was appropriate — that it would even be celebrated by HQ. And like always, Uber has quietly withdrawn the offending post, but they won’t apologize. That only exacerbates the internal message that this type of behavior was only bad because it wound up on BuzzFeed.

Lacy responded to Uber's alleged smear campaign on Monday in another PandoDaily post, addressing the supposed lengths Uber would go to bully a woman into silence. "These new attacks threatened to hit at my only vulnerability," Lacy writes. "The only part of my life that I’d do anything to protect: My family and my children."

Later on Monday, Lacy tweeted that Michael called her cell phone, wanting to speak off the record. Lacy said she would only talk on the record, and the Uber senior executive reportedly hung up. Michael later sent Lacy an email apologizing for his mid-party vent:

I was at an event and was venting, but what I said was never intended to describe actions that would ever be undertaken by me or my company toward you or anyone else. I was definitively wrong and I feel terrible about any distress I have caused you. Again, I am sorry.

Uber has yet to release a public statement apologizing to women tech journalists and the company's women employees and passengers for Michael's manipulative and demoralizing statements. Michael, however, provided Lacy with a Twitter apology, just for good measure.