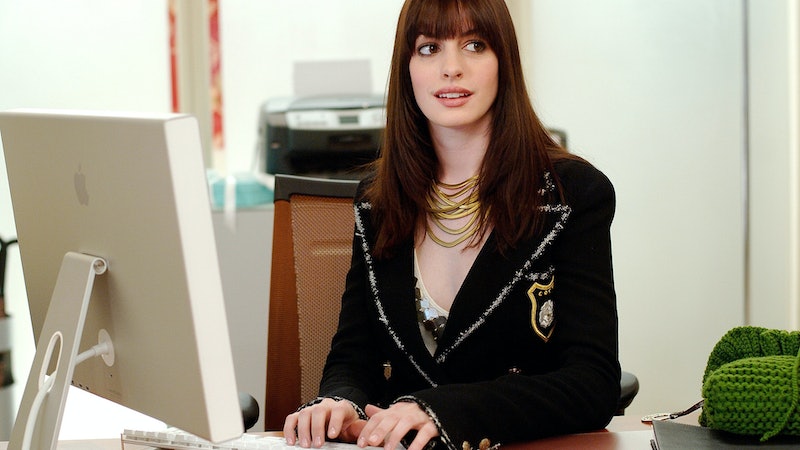 The last few years of my life have been very career-driven. Not in the "fancy briefcase and fabulous shoes" kind of way, because (yes, I'm the luckiest person in the world) I don't have to put pants on to go to work. But in the face of being a 20-something without of super clear idea of what I want to do with my life, I have spent my two years post-graduation throwing myself into the two things I am most passionate about: writing and singing. This has led me all over the place: I had a stint as a songwriter in Nashville for awhile, an internship for a comedy site in Seattle, another one writing in D.C. I just go where the wind takes me. The only thing I can tell you about what my life is going to be like next year is that my eyes will probably still be blue. Everything else is, as it always has been, up in the air.

But like many career-driven women, the pursuit of my goals occasionally takes some major hits on my personal life. A major part of being able to go so many places and try so many things is that I can't let myself get tied down, even by the greatest of humans. I'd like to think that in the end, everything I'm doing now will be worth it, especially because in the last few years of rumbling and tumbling all over the place, I feel significantly closer to where I need to be career-wise. But every now and then I'll come up for air and realize I'm completely disconnected from my little universe. Here are a few of the hits your personal life takes when you're focused on your career:

Whenever You Actually Show Up Anywhere, Your Friends Are Like "WHOOAAA!"

Bless my friends and their unending patience with me. I can lurk in the shadows of their lives from a faraway city and then return and still hang out with them, but yeah, I've gotten the "whoa" a lot.

You're The Absolute Last One In On The Gossip

And there is always gossip. Someone hooked up with someone, or quit their job, or moved to a foreign country to teach English. And I never find out until weeks—sometimes months—after it happened. It is always someone's job to give me cliff notes whenever I get back in their orbit.

Three years? Four? Pfft, numbers. Focusing on my career means I have the ability to leave wherever I am at the drop of a hat to pursue an opportunity. I realized as early as college that it wouldn't be fair for me to expect to drag someone else along every time I left on a whim. But yeah, it would be nice to go on a date every now and then.

Who has the time?! What even is Big Hero Six and why are people talking about it?? Just one more factor keeping me completely out of touch with other humans when I return to home base.

When you're really hitting the job market hard, who has time to do social media for fun? Social media becomes the fire-breathing dragon that controls your professional life instead. I'm way too busy perfecting my LinkedIn profile and scrolling through Indeed for the umpteenth time to actually converse with other humans.

You Wake Up One Day And Half Your Friends Are Engaged

Some of them are even creating tiny versions of themselves! The first time I got a wedding invitation in the mail, I genuinely just assumed it was the wrong address. A jarring reminder that yes, the rest of the world keeps spinning even when I am trotting all over it.

The golden few who have managed to balance work life with having a significant other and seem genuinely content with where they are, that is. The combination of being career-driven and working in the unique fields that I have chosen means that there is a constant drive to never get "comfortable" anywhere. I know if I had a super settled kind of life right now, I'd probably be miserable. But occasionally I envy the people who have found that happy medium anyway.

Every Time You Drink A Beer, You Accidentally Get Drunk

My body is so not used to going out with friends that when I do, it's like every nerve in my body sucks in the alcohol and I go from sober to tipsy four times faster than I ever would have back in college, when I had spare time to go out and was conditioned for it.

Your Parents Aren't Quite Sure What To Tell Everyone You're Doing

My dad literally sent an email to his friend that got forwarded to me describing me as a "singer/songwriter/author/blogger/actress". If he used one more "/" I'd probably just split into another person. YAY CAREER(S).

I have no idea what to do with myself if there is a day I don't have any work to do. I have this fantasy of sitting in bed and watching Netflix all day, but I can't do it without having ten different tabs open looking for gigs or fiction writing contests or seeing how my articles are trending. I have no such thing as chill.

You Can't Ever Plan Anything In Advance

People who have tunnel vision on their careers can't ever commit to something in a specific location for more than a few months because, not only will they likely forget anything that isn't directly job-related, the idea of getting tied down to any non-professional obligation is paralyzing. Who knows what kind of work stuff might come up that day?! LITERALLY AS I WAS TYPING THIS, THE DOCTOR'S OFFICE CALLED TO LET ME KNOW I HAD MISSED AN APPOINTMENT THIS MORNING. Apparently, I scheduled it a month and a half ago. Who even was that person?!

On a side note, I'm rescheduled on that appointment to next Monday, when I will most likely forget it again. Oy vey.