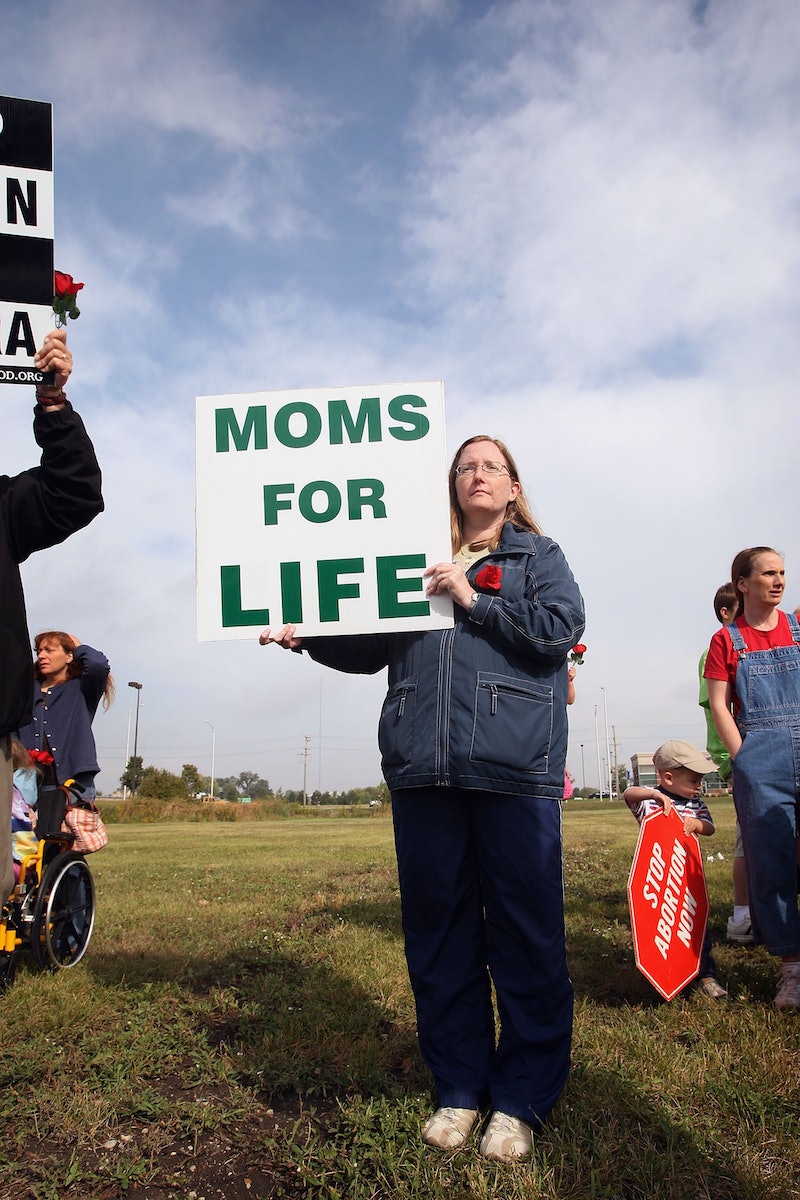 When the Supreme Court abolished buffer zones outside Massachusetts abortion clinics over the summer, the argument was that the people whom the buffer zones were meant to keep in check weren’t protesters at all. They were “sidewalk counselors,” peaceful and loving — so Jill Filipovic reporting for Cosmopolitan went to talk to a few of them to find out what was up. She spoke with almost a dozen of these self-identified “sidewalk counselors” outside the Boston Planned Parenthood, publishing the results in both an article and a video. If you're pro-choice, both are as depressing as you might imagine.

Despite the use of the term “sidewalk counselors,” Filipovic discovered that none of them had a background or any credentials in counseling, psychology, therapy, or mental health. According to one of them, Evelyn, there’s a tape that’s supposed to teach you how to be one; according to another, Ruth, she learned by watching others. She cites her qualifications for offering counseling as being a mother and a grandmother; as she put it, “You don’t have to have a degree in caring and loving.” Meanwhile, a Planned Parenthood patient named Pia said in the video, “I would never call them counselors. I’d call them sidewalk terrorists. You could be going there, as in my case, for your yearly exam, and be called a baby killer.”

I’ll be honest: I don’t find most of the sidewalk counselors’ arguments compelling, or even factually accurate. Part of it is a generational divide — most of the protesters/counselors are in their 50s or older. The gender roles later generations have challenged are not up for debate for much of the older generations; as such, access to birth control and abortions, for them, signals the collapse of society, not its advancement. But even allowing for this divide, the views are troubling. They present not only outdated notions of gender (the world has moved on, but not everyone has moved on with it), but also skewed versions of history that simply never existed. Here are a few of them:

“The Fullness of Being a Woman Is Being a Mother”:

Said Father Andrew Beauregard, a Franciscan monk who prays with a rosary outside Planned Parenthood, “The fullness of being a women is being a mother. For a woman to say that she has to have control over her body or over herself in such a way that she can’t be a mother really speaks to a degradation towards women.”

Women Can’t Have It All, So They Should Have Children Instead:

Ruth frames her argument via the “can women truly have it all?” debate that’s been discussed so frequently over the past year: “Girls that want to have their careers, their education, they want to have this and that, the latest fashions, or go to this, or get a car, and they also want to have children? That's a pretty hard thing to do. Usually, it's the children come first — that's how society has changed. Children have become a throwaway.” Like Beauregard’s argument, this one limits a woman’s purpose in life to one thing, and one thing only: Producing children.

In the video, she goes on to say, “If women want careers and education and everything but they don’t want children, then what are they doing having sex? ... One way to control [abortion] is not to hop into bed with every Tom, Dick, or Harry. That’s one way to control it.”

Here, we see the fundamental difference between viewing sex as being only for procreation and viewing it as the many, many things it can be. It also adds some slut shaming to the mix — although notably, there’s no discussion about whether men are also at fault for hopping into bed with every Thomasina, Dolores, or Harriet. Hmmm.

There’s a lot of talk of women being “selfish”: Women are “selfish” for wanting to do more with their lives than have children. They’re “selfish” for wanting to maintain control of what she does with her body, when, how, and with who. Nancy Clark, who is 52 with nine children, calls them “selfish objects” who have abortions “just so [they] can get on with [their] selfish lives.” But what about women and families who have children they can’t afford? What about overpopulation? What do we do when the planet can no longer support the number of people on it? Isn’t continuing to pack the earth with more and more people when we know we will eventually overextend its resources selfish, as well?

In 2011, historian Georges Minois wrote in the New York Times, “In 2011, or early 2012 at the latest, we are expecting the arrival of the 7 billionth world citizen. He or she has a 70 percent chance of being born into a disadvantaged family in a poor country. Should we be preparing a welcome or an apology?” Seventy percent. And now, in 2014, that 7 billionth citizen has come — but the clock has ticked right past him or her. The global population right at this moment is over 7,275,216,800 and growing. How many of the children who have been born since then have arrived on earth in a disadvantaged situation?

“Society Was Great Before They Had Abortions”:

For me, the biggest WTF comes from Fred Delouis, who is in his 80s and carries signs emblazoned with bloody fetuses and the words “STOP ABORTION.” Said Delouis, “Society was great before they had abortions because there wasn’t as much evil in the world. They weren’t murdering God’s babies, which is the most important thing.” History, however, would beg to differ on this point: Consider slavery. Consider both World Wars. Consider the Armenian genocide. Consider the Trail of Tears. Consider all of the atrocities that have occurred since time began. There has always been evil in the world. Abortion is not the cause of it.

But there’s more. Speaking about the 1950s, before the legalization of contraception and abortion, Delouis went on to say, “[Women] had equality. But they had to be obedient to their husbands. That’s where equality comes: Where the mother stayed home and raised the children in God’s light and the husband worked and everything was great. When I grew up, there were no problems.” How is one group of people needing to be subservient to another equality? That is, by definition, the very opposite of equality. And about there having been “no problems” when he grew up? I call bullshit. There were problems — there are always problems. Society just taught us not to talk about them. That’s why Betty Friedan and The Feminine Mystique were so important — they're not without their problems, but they blew the lid off of “the problem that has no name.” Giving it a name allows us to talk about it, to address it, to look for solutions for it.

The one argument I do find kind of interesting is this: According to Filipovic, Nancy Clark — the one who also referred to modern women as “selfish” — believes abortion “lets men treat women as disposable objects, getting what they want sexually without committing to marriage and procreation.” She believes a sexually permissive culture and the reliance on birth control and abortion means (in Clark’s words) that “men are winning because of the way women are giving themselves away.” Put this way, it sounds vaguely…not quite feminist, perhaps, but sort of like an attempt at empowerment, even if the empowerment is misplaced.

It does erroneously assume that all women want marriage and commitment. It’s also an “us versus them” mentality, which is never helpful. Feminism is not misandry, framing an argument as a “men are winning because X, Y, and Z” gets dangerously close.

“What is remarkable about this video is how much it shows that the controversy over abortion — and increasingly over contraception — is not about the complex balancing of women's rights and embryonic life that it's so often regarded as. As these interviews show, the real point of struggle between anti- and pro-choicers is the simple question of who should define a woman's life. Should it be the woman herself? Or traditional ‘roles’ that these protesters cling to? Sadly for women who are just trying to get some reproductive health care, this debate (that is amazingly still ongoing) is happening right in front of the clinic door.”

But although these interviews do present a different angle on the debate, I will still never understand why anyone would ever think they have the right to define someone else’s life — whether they identify as male, female, or anything else.

Read Filipovic’s full article at Cosmopolitan.com and watch the video below:

More like this
Michigan’s Governor Is “Going To Fight Like Hell” To Protect Abortion Access
By Andrea Zelinski
Sandra Bullock, Girlboss Extraordinaire
By Matt Harkins & Viviana Olen
How The City Healed Five Years On From The Manchester Arena Attack
By Ella Glover
Starbucks' Summer Menu Includes A New Chocolate Cream Cold Brew
By Emma Garza
Get Even More From Bustle — Sign Up For The Newsletter