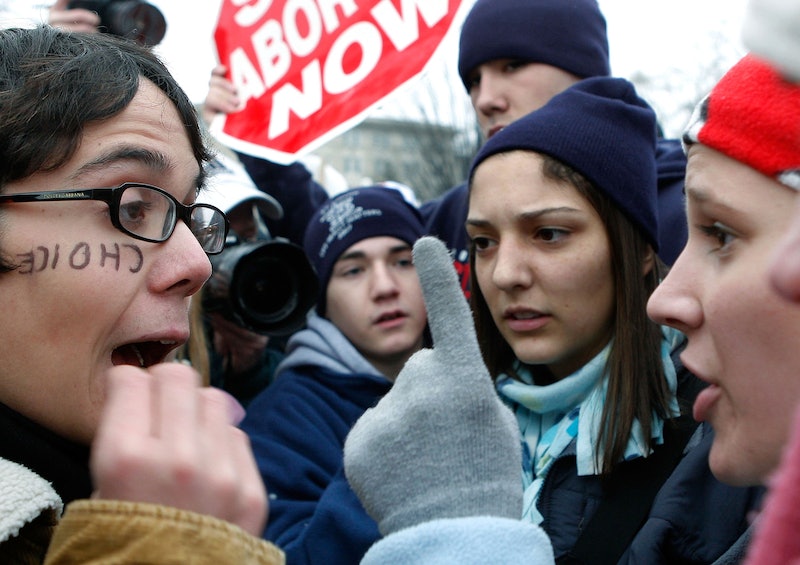 I was 27 years old when I found out I was pregnant. It was unplanned, and an accident that resulted, I assume, from not taking my birth control as regularly as I should have. I can admit to that now.

For me, there was only one option: Abortion. Although I took a couple days to weigh the other option, I knew all along what I was going to do. I was at peace with the choice I had made, and knew that I’d never regret it. I have never regretted it since and, when asked, I’m quick to point out that my abortion was one of the best decisions of my life.

I believe in the First Amendment with everything I have. I will stand by someone’s right to say what they want, because as Americans, we are fortunate that we have a constitution that protects it. I’ll even accept, although be briefly shaken by, the hateful (and inevitable) Twitter responses and “you should kill yourself” emails from anti-choicers, that this essay will garner. But I will not — not ever, ever — think that intimidation tactics, vocal or otherwise, should be allowed in or around abortion clinics where safety should be paramount.

My insurance from my new job had just kicked in, so I made an appointment at a local gynecologist's office. Knowing I was 10 to 11 weeks along, I knew I had to act fast.

Although this particular facility performed abortions, I didn’t want my procedure to be done there. I had been a patient of Planned Parenthood all through high school and college, and, since it had always been a safe, judgment-free zone for me, that’s where I wanted to have my abortion performed.

But before I could obtain an abortion, I had to make an initial appointment, one that would just reconfirm my pregnant status. This is such a process, I remember thinking. I just wanted to get it over with and move on with my life. I didn’t want an unwanted fetus inside taking up residence without my permission any longer. It made me feel sick.

On the day of my appointment, I was confronted by a man outside the clinic wearing a double-sided sandwich board with a bloody dead fetus on it. Scrawled on the board, in big black letters, were some anti-choice words that I chose not to read as I adverted my eyes from him as best I could. He was probably in his 70s, maybe older, and was with a woman who was about the same age. While he silently paced, she tried to hand out pamphlets to not just those going into the clinic, but those passing by as well. God bless, was what she was saying.

It was my first run-in with abortion protesters in my life, and they were both as close to me as I am to this computer screen right now. They were not aggressive verbally — although, as an atheist, I do find a lot of God talk kind of aggressive. But they were certainly aggressive in the sense that they were taking up space next to my body without my consent. I began to shake, more infuriated than I had ever been before. At a loss for words, at least any that I could have articulated coherently, I turned around and went home.

My reason for leaving wasn’t because these people had changed my mind or made me reconsider my decision. I left because I simply felt overwhelmed. I left because I was confronted on a day when I was going in to merely have my pregnancy results reconfirmed so that I could even book my abortion. I went home because I felt violated.

I made another appointment with Planned Parenthood, as I was running out of time, a couple days later. Again, the man with the sandwich board was outside pacing, but this time, he was alone. From under his board, messy with photos of blood and fetus pieces, he tried to shove his anti-abortion propaganda in people’s hands. I didn’t see a single person take one.

This time, despite my insides screaming at me to lecture him on the importance of choice, I walked past him, made zero eye contact, and headed into the clinic. It was the first doctor’s office I had been to in my life that had a metal detector. I remember that part being quite unnerving.

I got my results: I was pregnant. No shocker there. I made the appointment for the abortion, and left feeling empowered. I was taking control of my reproductive organs. I was choosing what was right for me and my body, and no one, not even the asshole outside with the sandwich board, could take that away from me. Or so I thought.

On the day of my abortion, I showed up to the Planned Parenthood and saw the same man yet again. This time, he had two women with him, and once again, I just couldn’t go inside. I didn’t want to get fired up and angry at these people who thought they had any right, any say, in my uterus. They threatened the safety I had always attributed to my prior Planned Parenthood experiences, and because of them, I decided to book my abortion at a different gynecologist’s office, one that didn’t have any protesters to infuriate me before having a procedure that was already stressing me enough out as it was. I got my abortion on the Saturday before Easter.

When I read Thursday that the Supreme Court had struck down the Massachusetts law that provided a 35-foot buffer zone around abortion clinics, I was sick to my stomach. I couldn’t believe that there could be a unanimous ruling that the buffer zone violates the First Amendment. I couldn’t fathom how the Supreme Court could just willingly open up abortion clinics and their patients to not only verbal abuse, but to physical harm as well.

In that one decision to erase those buffer zones, it was as if a target was immediately painted on the front door of every abortion clinic, as well as on every person who walks through one. Had they forgotten the innocent people who had been murdered at the hands of crazed, anti-abortion extremists all over the country? Or the attack on the clinics in the Boston suburb of Brookline in 1994?

I believe in the First Amendment with everything I have. I will stand by someone’s right to say what they want, because as Americans, we are fortunate that we have a constitution that protects it. I’ll even accept, although be briefly shaken by, the hateful (and inevitable) Twitter responses and “you should kill yourself” emails from anti-choicers that this essay will garner.

But I will not — not ever, ever — think that intimidation tactics, vocal or otherwise, should be allowed in or around abortion clinics where safety should be paramount. If you want to dictate to me what I can and can’t do to my uterus, you shouldn’t be allowed to get in my face, just inches from my person, to tell me your opinions on my choices. That isn't free speech — it's harassment.

Almost a year went by before I passed the man with the anti-choice sandwich board again outside the Planned Parenthood on Bleecker Street. I was a different woman. I had a new job, a new puppy, and a new sense of purpose. My abortion was months behind me, and without a single regret, I knew I had made the right decision.

As I came around the corner and our eyes met, he reached under his double-sided sandwich board to take another pamphlet from his collection to hand it to me. Although I began to shake, as I often do during a confrontation, I finally told him, in so many words, that he had no right to dictate to women what they can and can’t do with their uterus. I told him I was proud of my abortion. I told him that if I had to do it all again, I would. He didn’t say a word. All he did was calmly look at me with this strange pity in his eyes.

It wouldn’t have mattered if he broke his silence and began to lecture me on his views about abortion. Once again, his presence and silent judgement was enough.

I continued on to work, somewhat proud that I had finally said something to the silent protester who had forced me to get an abortion elsewhere. I no longer considered myself a coward for opting for another clinic, but rather a woman who simply didn’t want to deal with someone else’s shit on an already shitty day. It was a decision I made, but that doesn't mean it was a choice I should have needed to make.