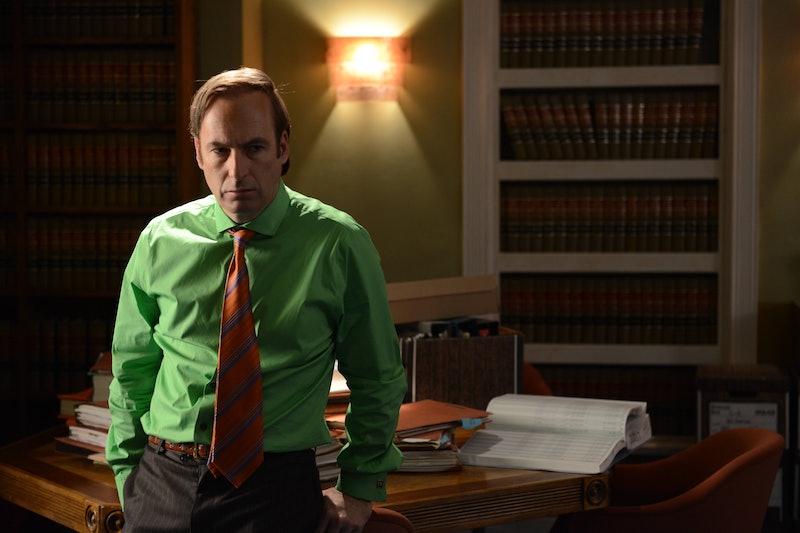 It's official: AMC loves us and wants us to be happy, you guys. After hearing our cries of support and excitement, the Breaking Bad home network has agreed to give the Saul Goodman series spinoff the green light. Thank you, creator Vince Gilligan! Thank you, actor Bob Odenkirk! Thank you, responsible-for-all-of-this Heisenberg (but just this once)!

Tentatively titled Better Caul Saul — because what else could they possibly name the series? — the hour-long show will be (as we predicted) a prequel, focusing on the origins of Saul Goodman before he ever got involved with Walter White's dog and pony meth show. Decidedly less dark than its Bad predecessor, Better Call Saul will (hopefully!) fall into the sweet spot of darkly-dinned drama with outlandish comic relief, something Odenkirk's character was known for in the darker circles of Albuquerque, New Mexico.

So, it's happening, you guys. And it certainly sounds like Saul's wardrobe will, somehow, be the least colorful thing about the show. At least one of the main sticking points for the people in Walter White's wacky world — the use of dramatic, high-stakes scenarios — will also extend to Saul's lawyering.

But it won't be all up to Gilligan, as Peter Gould, the writer/executive producer who wrote the episode that introduced Saul Goodman (also titled — you guessed it! — "Better Call Saul") is slated to run the series, ensuring that America's favorite whip-smart but crazy lawyer doesn't lose the punch for which Breaking Bad fans have grown to love him.

Now the only question that remains is: OMG does this mean that Saul's going to die soon?!