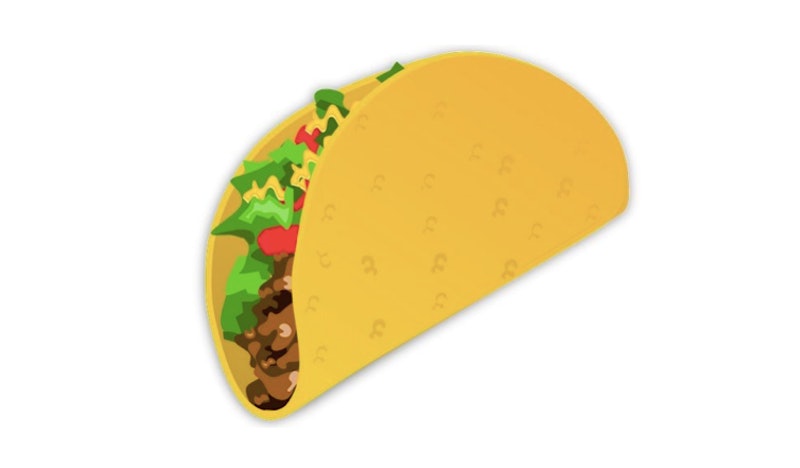 Tuesday marked the most joyous of all days: Taco Tuesday. And the Unicode Consortium, stern-sounding as it may be, knows it. Well, sort of. In a recent blog post titled "New Emoji Candidates for Unicode 8.0," addressing the emojis that may or may not come into play in mid-2015, it writes:

The Unicode Consortium has accepted 37 new emoji characters as candidates for Unicode 8.0, scheduled for mid-2015. These are candidates — not yet finalized — so some may not appear in the release.

The italicization comes from them, not me. Okay, okay, Unicode Consortium. We geddit.

Many other emoji characters, such as other food items and symbols of religious significance, are still being assessed, and could appear in a future release of the Unicode Standard.

This is only good news. In the attached form, the Unicode Consortium outlined exactly what these religious symbols might be.

It's about time. The last batch of proposed emojis, which are still yet to hit my iPhone keyboard — seriously, we can land a probe on a freaking comet, and we can't do this? — didn't come close to religious or ethnic diversity, sparking outraged petitions. (I mean, come on — if you can add "Man in a Business Suit Levitating," you can add a synagogue.)

So which emojis are most in demand, you ask? Well, in its own, very stern way — can you believe these are the same people who brought you the "martini" emoji you tap at furiously on Thursday nights? — Unicode Consortium has your answer.

This list addresses another subset the current emoji keyboard is lacking: Cheese items. Until now, there's been no way to accurately represent the foods that I spend 90 percent of my time eating. But no more! Now we will have (okay, okay, Unicode, might have) a cheese wedge, a cheese-filled taco, a cheesy cheesy burrito, and a cheese-topped hot dog. (What? You don't pile cheese on top of your hot dog?!)

We'll also have a unicorn face, which is, apparently, in demand. I'm sure that'll come in handy somehow.

In a little teaser, Unicode also shared what the taco emoji might look like, i.e., the future of your communication.

More like this
Here's What The Face Emojis Actually Mean
By Bustle Editors
What Does “Gatekeeping” Mean On TikTok? The Viral Term, Explained.
By Courtney Young
Using Your Pet’s Name As A Password? Here’s Why You Might Want To Change It
By Cristina Sanza
What Is “Night Luxe?” Breaking Down TikTok’s New Aesthetic
By Courtney Young
Get Even More From Bustle — Sign Up For The Newsletter