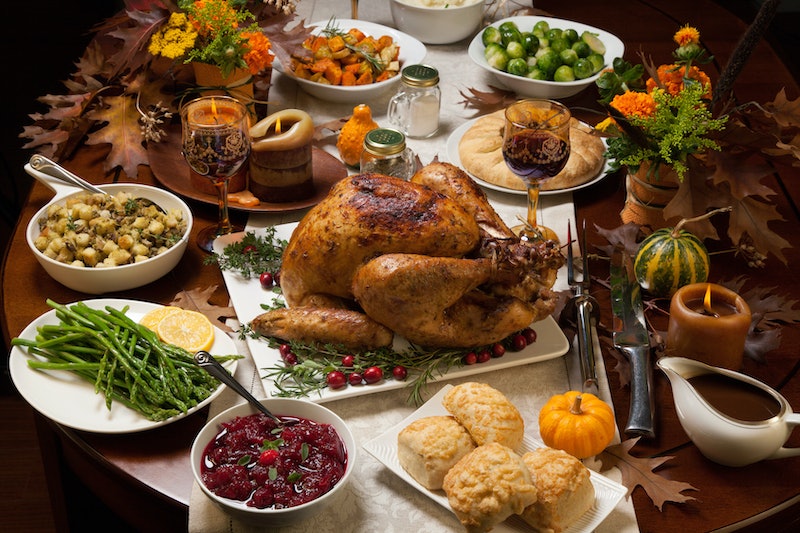 When we sit down to feast at the dinner table this Thanksgiving, we expect there to be turkey. It has, for as long as we can remember, been the main dish every year. But why do we eat turkey on Thanksgiving? Did the Pilgrims even have turkey on the table hundreds of years ago? And even if they did, why eat the same course year after year?

Yes, we love side dishes almost as much as we love the main event itself, and we will never not have room left for dessert, but turkey will always take the spotlight when it comes to this holiday. Sometimes my family dinners have gotten so big, we've had to haul in two turkeys on Thanksgiving. We may run out of the green bean casserole and cornbread but don't worry, we've got another bird roasting in the oven!

Eating turkey on Thanksgiving has become such a wide phenomenon in America that some have even adopted the term "Turkey Day." But I wonder, would it be considered downright crazy if we went with steak and shrimp instead of turkey and stuffing? Don't get me wrong. I'm all for traditions, but sometimes I think we need to ask ourselves why we do what we do. Here are six common myths about why we eat what we eat on Thanksgiving, debunked. Who knows — this might even inspire you to mix up your menu this year! Or maybe not. After all is said and done, turkey is still pretty darn delicious.

Myth No. 1: The Pilgrims had turkey on the menu during the very first Thanksgiving in 1621.

Truth: Most of what we know about the Pilgrims' harvest feast comes from colonialist Edward Winslow, who wrote Mourt's Relation: A Journal of the Pilgrims at Plymouth. The book records Winslow's first-hand account of the first Thanksgiving in 1621. Although Winslow says they gathered "wild fowl" during their celebration, turkey is never mentioned. He could have been talking about ducks or geese.

Myth No. 2: Turkey Day has been an official holiday since the pilgrims first celebrated with a turkey feast.

Truth: Thanksgiving wasn’t even celebrated annually until 1863, when President Lincoln officially declared that the fourth Thursday of every November would be a national holiday. Thanksgiving celebrations did occur prior to that, but they had to be individually announced each year by the country’s presidents. George Washington was the first to do this in 1789, calling for a “day of public thanksgiving and prayer.”

Incidentally, turkey became the choice dish after Lincoln made Thanksgiving the norm, because it is considered an American bird since it is not found in many other countries.

Myth No. 3: Turkey has always been the bird of choice to eat on Thanksgiving, inspired by the first Thanksgiving.

Truth: Turkey has been popular for a while, but not because of anything the Pilgrims did. After the publication of A Christmas Carol in 1843, more people took to turkey as a holiday delicacy since that is what Scrooge sends the Cratchit family for their Christmas dinner.

Myth No. 4: Many of the dishes we feast on during Thanksgiving are inspired by what was served during the first Thanksgiving almost 400 years ago.

Truth: Most of the traditional food we eat at Thanksgiving today came from Sarah Josepha Hale's editorials published in Godey's Lady's Book, which widely circulated in the mid-19th century.

Myth No. 5: Native Americans came together with the pilgrims to give thanks and celebrate.

Truth: As the Pilgrims were celebrating their harvest feast, they were shooting guns and cannons into the air, so it's likely that the Wampanoag tribe came in response to the gunfire.

Myth No. 6: The Pilgrims ate popcorn on Thanksgiving.

Truth: OK, so this one has nothing to do with why we eat turkey, but it's still interesting to note! Some believe that Native Americans taught the Pilgrims how to make popcorn and served it at the first Thanksgiving. This couldn't have been true, since all they had at the time was flint corn, which does not pop when heated.

More like this
25 Quotes About Love To Share During Pride Month 2022
By Madeleine Aggeler and Emma Garza
Meet The Spice Company Founder Who Sees Chai As A Metaphor
By Madhuri Sathish-Van Atta
If Your Refrigerator Is A Mess, These 25 Organizing Products Can Help
By Courtney Young
Here’s What Sarah Jessica Parker’s Canned Cosmo *Actually* Tastes Like
By Emma Garza
Get Even More From Bustle — Sign Up For The Newsletter