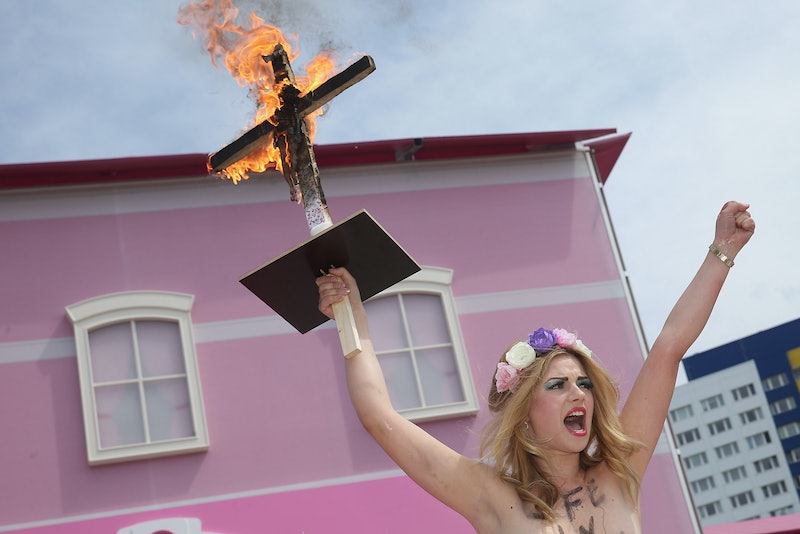 Radical protest group Femen is at it again with their attention-getting demonstrations. This time, Femen has taken it upon themselves to strip down and shove crucifixes up their bums in Vatican Square, while chanting anti-papal slogans. Sigh. As a self-identifying feminist and religious agnostic, I find this news a little too much to bear. OK, there are some things about religion, and specifically Catholicism, that really are dreadful. No major religion has a gold star history of treating women well or with a lot of respect. But a lewd act in protest doesn't negate that, nor does it make a point against it.

I get why women are angry, and I get what Femen thinks they're doing. I understand that papal authority is problematic. I find it problematic and it bothers me, and even with the new "cool Pope", I think Catholicism has a long way to go. But these are schoolyard antics. It's the equivalent of letting off a stink bomb in a classroom after a teacher has bullied you. It's not the best way to go about brining about change. First, and most importantly, I think that's because when you're trying to effect change, you need to have a level of respect for the institution you're criticizing. No one ever changed their actions or opinion based on the argument, "You're stupid, ner, ner, ner, ner! *thumb on nose, wiggling fingers in the air*." Not all Catholics are horrible and not everything that goes on at the Vatican is abhorrent. People are entitled to their religion, especially when it's practiced peacefully.

The second reason I find this ludicrous is that no one, especially no one who is set in their ways regarding the proprietary of women, is going to see a logical point being made by women shoving things in their butts. I can't even see a logical point. How does Femen expect a staunch Catholic to find logic here? As far as I can tell, this is a shock tactic to draw attention to Femen (annnnd you're welcome), rather than a protest designed to actually do or say anything practical. I find it a very disappointing addition to any argument against papal authority or towards feminism. Unfortunately, sometimes it feels as though protest groups like Femen replace the message with the medium, and in this case, the two are not interchangeable. You can watch the video of the women being carried off by police below but be warned, there's some NSFW crucifix in butt action going on too.

More like this
25 Inspiring Quotes From Black Women To Celebrate Black History Month
By Kyli Rodriguez-Cayro and JR Thorpe
6 Organizations Fighting Police Brutality That You Can Support Right Now
By Syeda Khaula Saad and JR Thorpe
24 History-Making Black Women You Probably Didn't Learn About In School
By Ayana Lage and JR Thorpe
15 Black-Owned Liquor & Wine Brands To Add To Your Bar Cart
By Alexis Morillo
Get Even More From Bustle — Sign Up For The Newsletter
From hair trends to relationship advice, our daily newsletter has everything you need to sound like a person who’s on TikTok, even if you aren’t.