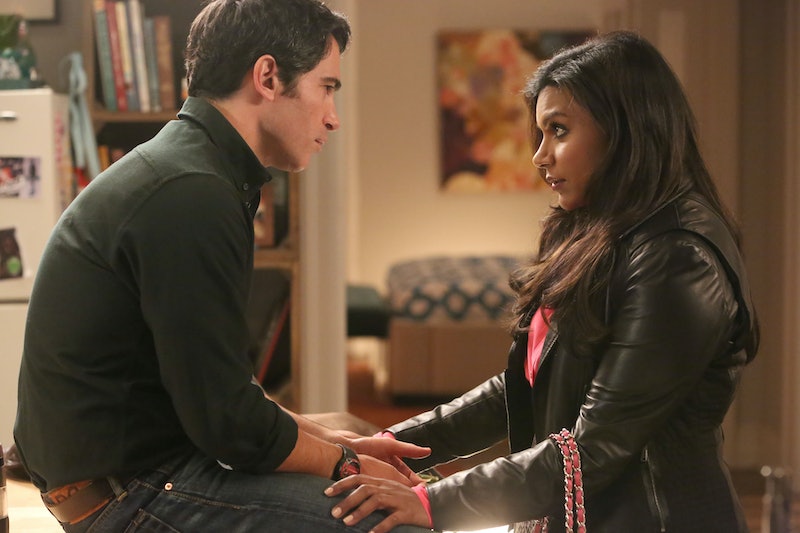 What a wild ride The Mindy Project was on Tuesday night. Obviously, we love Mindy and Danny together on The Mindy Project — if you're breathing human being that has any type of heart inside of your body, you are pro-Dandy (workshopping that couple name). In a recent episode, Danny mentioned how he and Mindy have been dating for seven months, which blew my mind, because it feels like the Empire State Building meet-cute happened just yesterday (I still feel the fictitious pain in my calves from Mindy running up all the stairs to the top). The relationship — this far — has been going great, so it only makes sense that they would maybe move forward in their relationship and, dare I say, talk about marriage.

Whoa, Nelly. Did I just suggest that Danny and Mindy get married? I don't know if I am personally ready for this — I love the dating vibe these two have — but sometimes it isn't about what I want; sometimes I have to think of others, or in this case, two characters on a television show. In Tuesday's episode, Danny "stumbled" upon Mindy's diary. I love when people "stumble" upon journals — which I am genuinely shocked still exist, let alone Mindy Lahiri would use frequently — and just have to read what's inside, because it fell out of the drawer and landed wide open on the bed. I digress. So Danny finds the diary and starts reading. Turns out, Mindy was feeling Danny from Day 1, which makes me love these two even more.

It's been seven years since these two met, and once Danny reads through — OK, maybe he skimmed through — those seven years, he comes about a current entry that suggests Mindy wants Danny to propose. I believe the exact quote was "If he doesn't propose by Christmas, I might have to move on." Again I repeat, whoa Nelly.

Danny — and I — start to panic about this time frame. As Danny says, it's "too much pressure on the Lord's birthday," meanwhile I'm thinking — in the eternal words of Selena Gomez (yep, I am doing it), "Baby, slow down the song/ And when it's coming closer to the end hit 'Rewind'." But again, this isn't about me. Danny seems a little shook up by this "time frame" that Mindy has unknowingly put upon him. The big reveal of how Danny is going to react to the discovery comes at the end of the episode when Mindy asks Danny if he wants to stay the night. Clearly Danny staying the night is a metaphor for staying in the relationship (clearly). And that's when it happens. That's when Danny says he is going to leave. And I go:

As any "breathing human being that has any type of heart inside of your body" would do — to quote myself earlier in this post — I almost shut the TV off. How? Why? What? All questions running through my mind. But... wait... for... it. There's a knock at the door and Danny returns and says he is staying the night. HALLELUJAH. So since that happened — and we learned Danny isn't going to run away from the relationship — and Dandy (?) may be heading toward a proposal this holiday season, I've been doing this in my apartment. Feel free to celebrate with me.