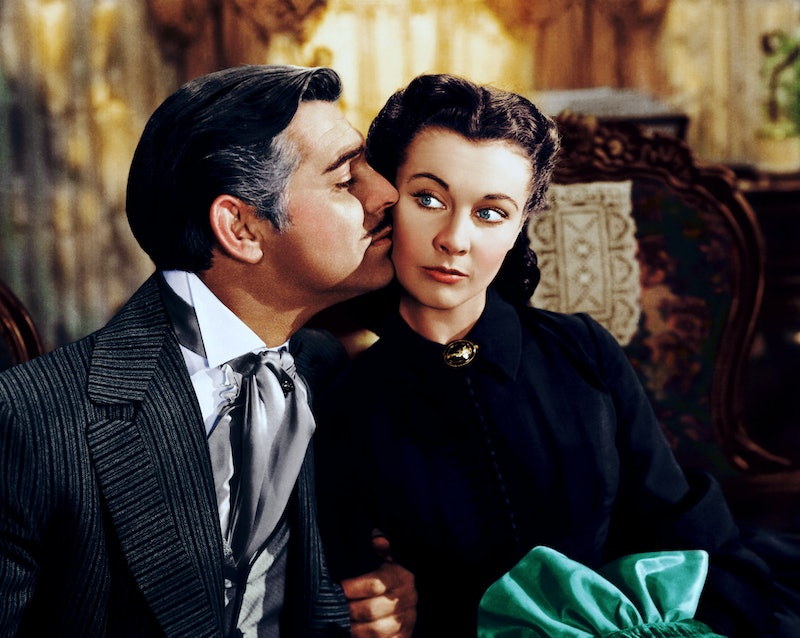 Someone as manipulative and selfish yet still indescribably charming as Gone with the Wind ’s Scarlett O’Hara isn’t meant for a typical love story. In fact, I think Scarlett herself would be bored enough to scream with an ordinary one. Instead, her story follows the years she spent chasing after Ashley Wilkes, only to marry two other men, Charles Hamilton and Frank Kennedy, once Ashley was already taken. With her ongoing obsession with Ashley, she managed to completely miss out on the fact that she’d already met the real man for her — lovable scoundrel Rhett Butler — even after he became her third husband.

It’s possible that I shouldn’t be using the experiences of a woman who only managed to love one of her three husbands for wisdom on relationships and dating. Thirty-three percent isn't very impressive to start with, and it sounds even worse when you consider the fact that she didn’t realize she loved him until after it was too late. Nonetheless, Gone with the Wind has taught me invaluable lessons about matters of the heart. With Scarlett being such a slow learner, there are several hundred pages detailing her many missteps. For me, those mistakes have proven just as — or perhaps even more — enlightening than her rare successes in love.

Here are the biggest takeaways on relationships and dating from Scarlett O’Hara’s turbulent love life:

SELF-CONFIDENCE IS A GAMECHANGER

As author Margaret Mitchell put it, “Scarlett O’Hara was not beautiful, but men seldom realized it…” Sure, Scarlett had the smallest waist in three counties at a mere 17 inches (eek!), but what really made her the object of so much male attention was her charm and her confidence. She figured out what worked for her and she owned it. Her high self-esteem probably crossed over into vanity, but she’s still a perfect example of how being comfortable in your own skin makes you more attractive to others.

IT’S OK TO GO AFTER WHAT YOU WANT

If Scarlett had been born a century and a half later, I have no doubt she’d be the CEO of a Fortune 500 company. Unlike many of her contemporaries, she didn’t sit back and wait for things to happen; she plotted, schemed, and pulled puppet strings until she got what she wanted. In many cases, her objective was a man, and she pursued them with the same ruthless intent as she did everything else. Her methods might have been a little too cutthroat at times (for example, stealing her sister’s fiancé), but I’ve always respected that she was brave enough to take action.

Poor Charles happened to be in the wrong place at the wrong time when Scarlett set about trying to make Ashley jealous to wrest a proposal out of him. The mission was doomed from the start because he was already engaged to Melanie, Charles’s sister, but even so, there were unintended consequences. With just a few bats of Scarlett’s green eyes, Charles was ready to tie himself to Scarlett for better or for worse, and unfortunately for the both of them, their marriage was mostly on the “for worse” end of the spectrum. The experience didn’t stop Scarlett from scheming, but at least her future manipulation was based more on survival than on pettiness. Plus, she managed to scare me away from toying with people’s emotions.

LEARN TO SEPARATE FANTASY FROM REALITY

After more than 900 pages of pining for Ashley (depending on the edition, I suppose), Scarlett finally realized that she had built him up in her imagination. The man that she’d thought she wanted for all of those years didn’t exist, and all the while, she’d been pushing away the one man she truly loved. I get a little teary just thinking about it — all that unnecessary heartache. What I’ve taken away from Scarlett’s mistake is that you have to recognize that even you don’t always know what’s best for yourself. You have to keep an open mind and be willing to reevaluate.

FIND SOMEONE WHO ACCEPTS YOU — FAULTS AND ALL

When Charles proposed to Scarlett, he told her she was “the sweetest and the kindest” girl he’d ever met in his life. Clearly, those words could only have come out of the mouth of a man who barely knew her. He, like the majority of her other suitors, only saw the Scarlett she wanted him to see: the charming Southern belle. He’d never seen her slap someone or throw a full-on tantrum, like Rhett did the first time they officially met. Only Rhett saw the worst of her, yet loved all of her anyway. Too bad Scarlett took so long to catch on to how special this is — I think pretty much every reader was faster than her on the uptake here.

YOU HAVE TO GIVE, AS WELL AS TAKE

After waiting for her through two marriages, Rhett jumped on his chance to put his ring on Scarlett’s finger, proposing before her mourning period for Frank was even over. Unfortunately, it wasn’t the start of their happily ever after. He gave Scarlett the comfort and security that she’d been wanting for so long, as well as his love, hoping for her mind and her heart in return. Sadly, she was still too hung up on Ashley to give him anything back. Eventually, Rhett got sick of waiting and decided it was time to move on — a choice that was understandable, yet still heartbreaking. Scarlett learned right along with the rest of us that love is best when it’s reciprocal.

DON’T UNDERVALUE THE LOVE OF YOUR GIRLFRIENDS

Even though Melanie had defended her and stood by her through more life-changing events than I can count, including a freaking war, Scarlett’s main feelings toward her were jealousy, annoyance, and resentment. Only when Melanie was dying did she finally get some way overdue love from Scarlett, who at last realized that she had spent years taking for granted the only true friend she’d ever had. It turned out that she loved Melanie more than she ever did Ashley, and she missed out on the chance to experience platonic love because she was focused on chasing the wrong romantic love. To me, that’s just as sad as losing Rhett.

RISE FROM THE ASHES

Throughout the novel, Scarlett found a way to start over each time she suffered a setback. The guy she loved got engaged? She married his fiancée’s brother instead. Money became tight? No problem — she got a loan and bought a sawmill. Like I said before, she was ruthless, but she was also resilient. I choose to believe that her quest to win Rhett back would have been successful, but either way, the important lesson here is that she didn’t give up. Heartbreak happens, and the only thing to do is fight on. After all, tomorrow is another day, so you have to wake up ready to face it.

More like this
Bumble's "Compliments" Feature Lets You Message Before You Match
By Lexi Inks
15 Ways To Deal With A Toxic Family During The Holidays
By Gabrielle Moss and Carolyn Steber
Emily Ratajkowski & Pete Davidson's Astrological Compatibility, Revealed
By Nina Kahn
The 'Firefly Lane' Book Ending Teases Way More Tears To Come In 2023
By K.W. Colyard
Get Even More From Bustle — Sign Up For The Newsletter