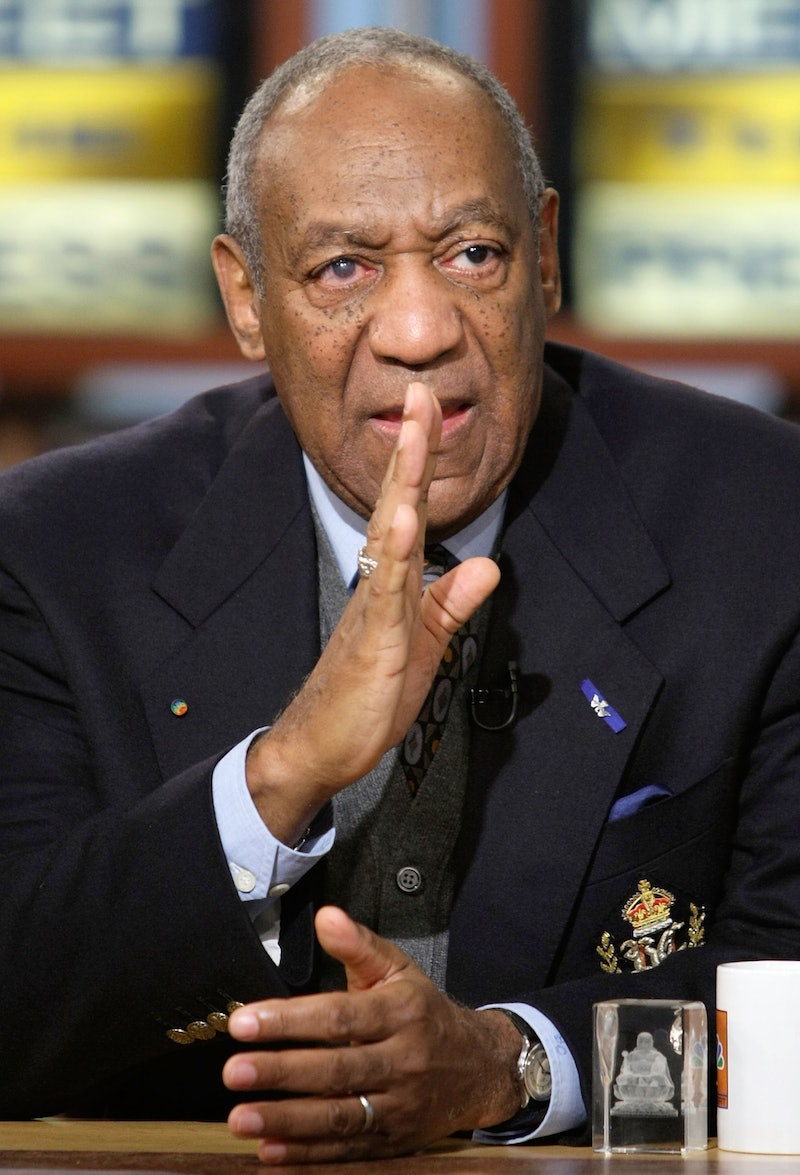 Silence isn't going to be the best defense for long. To be honest, it isn't even the best defense right now. In the wake of the decades-old sexual assault claims that are being brought against Bill Cosby after a viral video of comedian Hannibal Buress calling him a rapist during a routine shocked the Internet, supermodel Janice Dickinson revealed that Cosby had assaulted her on Entertainment Tonight on Tuesday. Many of the alleged victims of Cosby thus far have been relative unknowns or industry insiders, but Dickinson is a well-known and recognizable face who has appeared on such shows as America's Next Top Model. Thus, it comes as no surprise that Cosby's lawyer responded to Dickinson's claim despite the original decision to remain silent in the face of these allegations; it's a sad but true fact that her story carries more weight and will reach more ears than that of someone who isn't a celebrity in their own right.

Although both Cosby and his lawyer have tried to maintain a private, silenced air about the allegations to this point, at best calling them too ridiculous to be substantiated with a serious response, Dickinson's story seems to have changed their minds — at least for now. According to a letter sent to The Wrap, Cosby's lawyer called the claim an "outrageous defamatory lie" and cited times in the past when Dickinson had said Cosby blew her off because she wouldn't sleep with him. In response to her statement that she had detailed the sexual assault in her autobiography before being asked to remove it by Cosby's lawyers, he responded:

Amidst these new allegations, Cosby's Netflix comedy special has been put on hold. "At this time we are postponing the launch of the new stand-up comedy special Bill Cosby 77," said the website in a statement on Tuesday, after the pressure from the controversy calling for them — and for NBC — to cancel the plans they had in the works for Cosby specials and after Dickinson came forward with her story. NBC still has yet to make any indication that they are going to put their own plans on hold, but there's still time for them to make a decision either way. The truly important thing is that it seems like it's almost time for Cosby to come to a decision either way.

The fact of the matter is that he has decided to remain silent on these claims and that the victims are finding the strength and courage to fill his silence with their stories now that the world seems to finally be listening to what many of them have been saying for years. In a Gone Girl–esque twist, Cosby is as good as convicted in the public mind and his silence only gives people further cause to make up their own minds about what happened. All anyone wants is justice for these women if their horrific experiences are true. It's clear that, this time, the public isn't going to forget about this very easily.