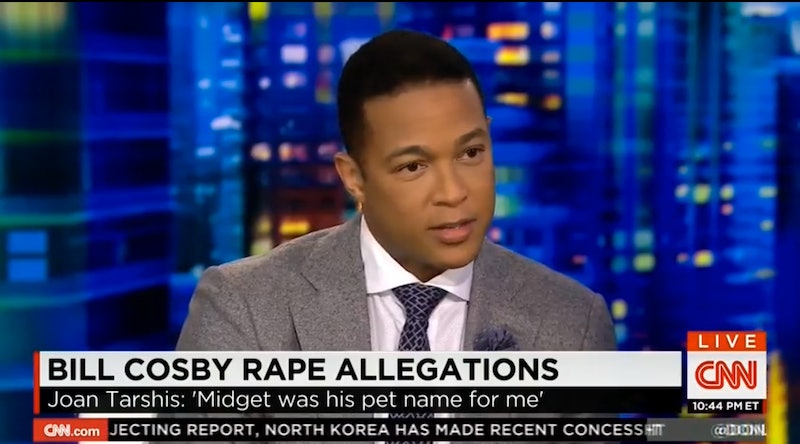 Tarshis came forward on Sunday when she wrote in to the Hollywood Elsewhere, detailing her alleged rape by the comedian when she was 19-years-old. She appeared on CNN Tonight Monday evening, ascribing her years of silence to shame and guilt.

When Tarshis returned Tuesday for the second part of the interview, Lemon began by making it very clear that he is a serious journalist and his job necessitates asking probing (read: insensitive) questions. After Tarshis gave him his figurative "good journalist" cookie for being skeptical about her story the night before, Lemon launched into this doozy:

Lemon: Can I ask you this? And please, I don't mean to be crude. OK?

Lemon: Because I know some of you — and you said this last night, that you lied to him and said, 'I have an infection, and if you rape me or if you do — if you have intercourse with me, then you will probably get it and give it to your wife.'

Lemon: You said he made you perform oral sex.

Lemon: You, you know, there are ways not to perform oral sex. If you —

Tarshis: Oh. Um, I was kind of stoned at the time. And quite honestly that didn't even enter my mind. Now I wish it would have, but —

Lemon: Meaning the using of the teeth.

Tarshis: Mhmm, yes, that's what I was thinking you — yeah, I didn't even think of it.

Lemon: I had to ask.

You know that there are ways to not sound like a rape apologist, right?

Lemon stumbled over his words, hopefully realizing that he was landing himself in a dark pit of victim-blaming. But the whole thing was awkward and baffling for even more than that. Lemon not only casting doubt on Tarshis' story, but presented his advice in a derogatory, isn't-it-obvious fashion. Oh, how silly of her! She was allegedly being raped by one of the biggest stars in television and she didn't think to bite his penis that he had, according to Tarshis, put in her mouth after drugging her.

THANK YOU, DON LEMON! I HAVE A FEW OTHER CRISES FOR YOU TO SOLVE.

Crosby himself has fervently denied all claims of sexual assault. In a statement Sunday, his lawyer said:

More like this
UK Viewers Will Have To Wait To See Jessica Biel’s Killer Housewife Series
By Rachel Mantock
Justin Timberlake’s ‘Candy’ Character Really Investigated Betty Gore’s Killing
By Brad Witter
9 Honestly Unbelievable Revelations From The WAGatha Christie Trial
By Frances Stewart
Don Crowder Successfully Defended Candy Montgomery, But His Story Ended In Tragedy
By Gretchen Smail
Get Even More From Bustle — Sign Up For The Newsletter