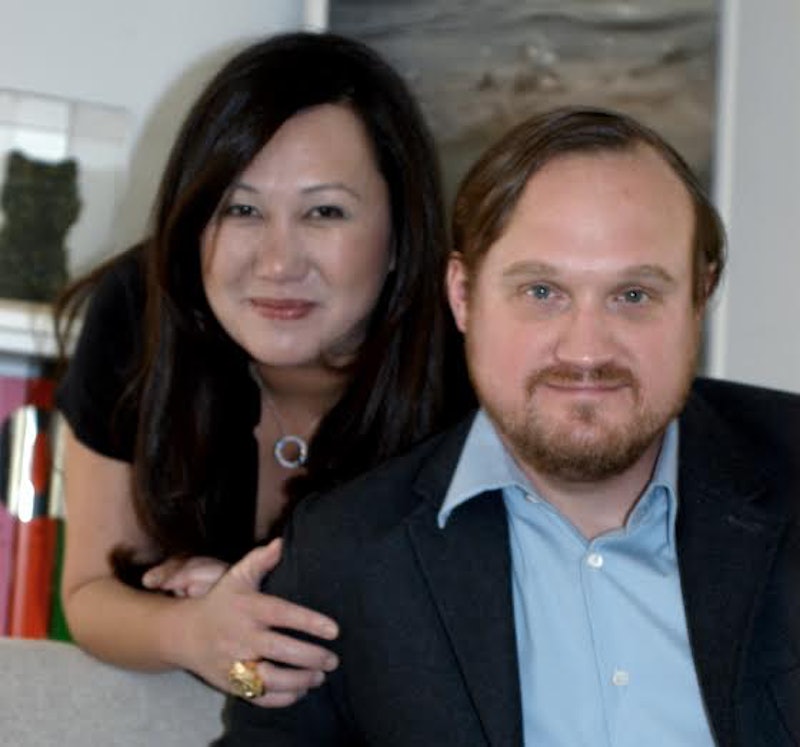 Melissa de la Cruz is having one of the busiest years a writer can have. With three (yes, three!) books released in 2014 and all of the accompanying touring and press that goes along with each book, she doesn't exactly have a lot of free time. Luckily, she has her husband and writing partner Michael Johnston alongside her. The two have been collaborating for years, but they made it official with the Heart of Dread series co-authored by de la Cruz and Johnston.

The series follows a future where the whole globe is covered in ice, with the only refuge being the hedonistic city of New Vegas. But 16-year-old black jack dealer Natasha journeys to find a land of legends, The Blue, where the sun still shines bright.

The second book, Stolen , was released this month, so Bustle chatted with the pair about their sci-fi, fantasy series and just what dinner table conversation is like in the de la Cruz-Johnston household.

BUSTLE: Frozen and Stolen have a lot to say about climate change and a seemingly very real consequences of our actions in today’s world. What do you hope readers take away from the book on that point?

MICHAEL JOHNSTON: It’s always difficult to breach these kinds of contemporary topics because you walk a fine line. You don’t want to preach to readers, especially when they’re young adults who spend their days at school and don’t want to hear more of this at night. How do you address these issues with young adults — and even adults who are reading — and make it interesting? We spend a lot of time researching.

That first book was a lot about the oceans, and we were fascinated by this idea of a massive garbage island that is real and exists in the center of the Pacific that’s twice the size of Texas and that’s being gathered by a current that sweeps everything into the center of the ocean that’s creating new land masses. So a lot of our time in Frozen is spent on the Pacific where we’ve created this new continent and the sort of horrors of the ocean filled with waste and refuse.

Keeping with the book Frozen, why Las Vegas, or New Vegas? What drew you to this locale as the setting?

MELISSA DE LA CRUZ: We’ve always liked Vegas a lot. We like the idea of this indulgent playground where anything goes. I even remember it as a kid, it was the ‘70s. I grew up in the Philippines and my family went to America and we traveled all around the States, and we went to Vegas. And there were billboards for strippers — like, a lady, and as the lights would go she was kind of stripping on the billboard. And I was 8 years old, and I thought, “Whoa, what is that?” It just seemed like this really adult, dangerous place. And we’d always been drawn to it for that reason, because it’s so different from the rest of America.

JOHNSTON: We kind of thought of Vegas as this cockroach of civilization. When everything else dies, Vegas will still crawl along.

You’ve worked together lots in the past, unofficially, on some of Melissa’s titles. Now, with the Heart of Dread series, you’ve made your partnership official. What’s the process like between you two when you’re writing these novels?

DE LA CRUZ: Usually we talk a lot about the ideas. And now that we’re officially working together, one of us will write the first proposal and then the next person will take it to the next level. So, I’ll write 10 pages, Mike will write 30, and then I’ll write 50. Usually, once we get an outline, one of us will write the first draft. For these books, Mike does the early work and I do a lot of the finish work. And we argue about who has the harder job. I always say that I have the harder job, because the beginning is so much fun!

JOHNSTRON: In the beginning, you can leave your problems for someone else to solve.

It must be hard to turn it off. Do you talk about plot lines at the dinner table?

DE LA CRUZ: All the time.

On your website, Melissa, you give lots of great advice to young aspiring writers, and one of the things that really stuck out to me was that you tell everyone to live their life, not to sit and write all the time, but to experience so you have something to write about. But this year with Vampires of Manhattan, The Ring and the Crown , and Stolen — how do you find the time? And what do you like to do when you have spare minutes — if you do!

JOHNSTON: I live with Mel and I also have that question.

DE LA CRUZ: We do a lot of family stuff! I’m involved in my daughter’s school and in her day-to-day life, so all of our free time is devoted to our kid and our kid’s social life, which has kind of become our social life. We’re really busy and we have a lot of friends, so it doesn’t feel like we’re very solitary all the time. I’m either really on or completely off. I can’t do both, though Mike will argue that I’m always on, always working. We’re going to Disneyland tomorrow, so that time is all about Maddie, and then there’s times that it’s all about the book.

Our free time is often spent on the books because it doesn’t feel like a job. That’s what people don’t always understand. We like doing what we do, so it never feels like a chore or an obligation.

Our free time is often spent on the books because it doesn’t feel like a job. That’s what people don’t always understand. We like doing what we do, so it never feels like a chore or an obligation.

Similarly, a lot of your books are set in all different worlds and are clearly inspired by different places around the globe. What are some of your favorite places to visit together?

DE LA CRUZ: Italy. I would just like to go to Italy always.

JOHNSTON: Italy is kind of our favorite place. I went there in college and have loved it ever since.

DE LA CRUZ: We like going to new places, but we also really like being home. We like being in Palm Springs because we have a house there, away but we’re at home.

It’s funny, I have a friend going to Brazil, and I ran into her at a book fair, and I was telling her what places to go and what restaurants to eat and she’s like, “That’s so weird, how do you know Brazil so well?” and I said, “Oh, I wrote a whole book set in Brazil!”

Mike, do you have any plans or a desire to write a book separate from Melissa?

JOHNSTON: I have thought about it. We’ve always worked together and we have always wanted to work together. In the Heart of Dread series, somehow, working together gave me that desire to do a project on my own. It made me realize also I wanted to try to see what my voice would sound like on its own.

We’ve always worked together and we have always wanted to work together.

So I have for quite a few years now been working on an adult epic fantasy novel, and its nearly completely. I need to finish the third Heart of Dread novel, and then I can finish my adult novel, and it will hopefully be for sale sometime in 2015.

Melissa, have you been putting in your voice in that project at all?

DE LA CRUZ: Yes, I’m all over that book! In fact that book is on my computer right now. No, it’s Mike’s book. He makes all the decisions. I have suggestions, but it’s his story and his point of view. It definitely could have gone a different way with my suggestions, but it’s interesting to see the story evolve as his own thing.

In addition to that, I’m sure it’s a lot, but can you give readers some hints about what to expect next from you?

DE LA CRUZ: Descendants is coming out in May. My book is the prequel to the Descendants movie coming out in August. It’s a nice, big, juicy middle grade series where classic Disney characters are reimagined with their progeny. It’s really, really fun to play in that universe and to be part of his huge juggernaut from Disney.

The YA spinoff of The Witches of East End called Triple Moon is going to be a new story 10 years later about twin goddesses or witches who have been banished to East End, and they get into some trouble.

More like this
The Enduring Appeal Of Escaping Our Own Brains
By Chaya Bhuvaneswar
16 Novels That Paint A Realistic Portrait Of Abortion
By K.W. Colyard
10 Must-Read New Books Out This Week
By K.W. Colyard
'Bridgerton' Star Nicola Coughlan Confirms Season 3 Will Focus On Colin & Penelope
By Grace Wehniainen and Alyssa Lapid
Get Even More From Bustle — Sign Up For The Newsletter