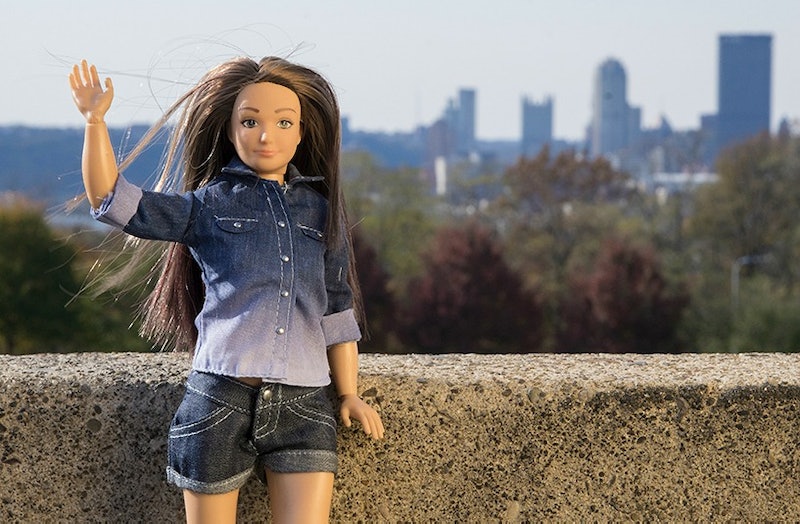 The video seen here was filmed at St. Edmund’s Academy, an independent day school in Pittsburgh, Pennsylvania. St. Edmund’s teaches students from preschool all the way up through eighth grade; for the purposes of the video, however, Lammily was brought to the school’s second grade classroom (makes sense, given her target demographic). It’s worth bearing in mind that the video was made by Lammily creator Nickolay Lamm; as such, we can probably view it at least partially as an advertisement — and indeed, Lammily is available for purchase starting today, making the video strategically timed. But even taking it with a grain of salt, it’s still worth watching; the kids’ reactions to her aren’t rehearsed or anything, and they speak thoughtfully and honestly about the doll. Here are a few of their responses:

Side note: I'm convinced that this little girl is the second coming of Luna Lovegood. Anyone else?

“She’s Not Like Other Dolls That I Play With.”

She continued, “She’s really unique — I don’t have other dolls like this. It looks real.” This girl particularly dug Lammily, by the way; if you scroll down to watch the whole video, you'll see it in everything she does with her.

When asked what kind of activities they think Lammily would do, the kids’ answers included running, ice skating, gymnastics, dancing, and horseback riding; one of the girls (the one who thought she was super cool) even responded, “She’d do everything I do.” And as for her career? A lot of them thought she’d be a swimmer, or a teacher, or a pilot, or that she’d have “a computer job.” Meanwhile, they all thought the Barbie would be a model or “fashion star.” You probably won’t be surprised to hear that when they were asked which doll they thought was most like themselves, they all picked Lammily. They also all really like the fact that she’s smiling, and (interestingly) the fact that her toes are all distinct. Telling, no? Again, the video is kind of an advertisement — but I still think there’s a lot we can take away from it.

What Barbie represented when she first hit the scene was very different than what she represents now: Coinciding with second-wave feminism, she was a rebel with her own car and house, as well as seemingly sexually liberated (although whether or not kids picked up on that fact remained to be seen). As time has gone on, though, she became less of a rebel and more the norm; she also became a little obsessed with the color pink. And I’ll be honest: Whether or not she’s been unfairly maligned, I don’t think she’s what we need right now. Lammily, however, definitely is.

Lammily isn’t without her flaws — for example, she’s a little lacking on the ethnic front at the moment; only one version of the doll is available, and that’s a white one — but she’s definitely a good start. She’s not a cartoon character like so many other dolls are and she’s not a performance of femininity. She just is: She’s a real girl, with real wardrobe choices who could have real adventures. What better way to teach kids how to be comfortable in their own skins?

Watch the full video below, and head on over to the Lammily website to check out her full line:

More like this
Ask Gen Z: Kate Glavan & The "Ugly Hag Stroll"
By Alexis Morillo
Here’s What Sarah Jessica Parker’s Canned Cosmo *Actually* Tastes Like
By Emma Garza
What Is “Night Luxe?” Breaking Down TikTok’s New Aesthetic
By Courtney Young
TikTok Is Using A ‘Love Island’ Sound To Expose Their Weird Crushes
By Courtney Young
Get Even More From Bustle — Sign Up For The Newsletter