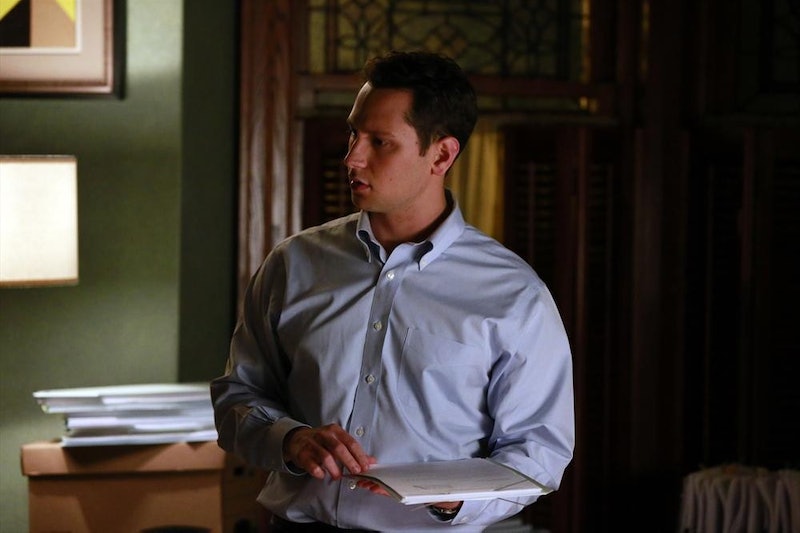 Theories about How To Get Away With Murder are a dime a dozen right now, whether we're still racking our brains over who killed Sam on HTGAWM (we'll find out Thursday, for real) or thinking about the still lingering mystery of who killed Lila (we'll find out... sometime, I guess). The suspects have been narrowed down, the evidence collected, but once these situations have been solved, then what? Why, another murder, of course — it's literally in the name of the show. I can see the next murder springing from what's already taken place during the first half of this season, and the fallout from the consequences of that lead to someone's untimely death. From the beginning of the show, there's been one clear frontrunner for the next character offed: Asher will be the next to die on How To Get Away With Murder . Sorry, Asher!

He's the character we all kind of love/hate at the same time, and his death would be the smallest massive blow to Annalise Keating and her merry band of students. Has he really contributed anything to the weekly cases so far? Aside from the Asher heavy episode were we learned all about his dad, not really. He's mostly around for comic relief, honestly. And while it isn't so easy to replace a shooting star or a puppy dog, it is kinda easy to go find another meathead. Sorry, Asher.

For any even slightest avid TV watcher, you'll know that Matt McGorry plays double duty on both HTGAWM and Netflix's Orange Is the New Black. It would be easy to kill off Asher so McGorry can go back to stealing our hearts as sweet correctional officer Bennett but he actually got the go-ahead to juggle both HTGAWM and OITNB. While we can celebrate and cheer that he's allowed to do both, it is a little bit suspicious. That makes me think that he's only been signed on to play Asher for a limited amount of time, because seriously if suddenly Bennett disappeared we'd revolt just like the girls at Litchfield. Asher, on the other hand? We'd figure out a way to manage.

Considering that Asher is not part of the "main" group of students — which includes Wes, Laurel, Connor and Michaela, even including Rebecca — so far his storyline through Sam's murder has been reduced to nothing. We didn't know where he was for the first handful of episodes, which always raised questions. I don't know about you, but I never thought he'd be the killer himself, but he's not even a part of the trouble going down.

And yeah, maybe it's because he's off sleeping with Bonnie and then shows up at Annalise's to demand his trophy back, but that's not a whole lot of interaction. And, it's doubtful that he'll be kept out of the loop for long. While Asher might be that typical fratboy cliche, he does have a conscience. He's not going to like the murderous things his fellow comrades have been up to...

Which, will ultimately lead to his death. They're trying to cover up a cover up, and I'll bet that's what Asher gets mixed up in — or he manages to uncover something HUGE with Lila's case, and that brings about his end. With all the twists and turns of the show, it could be anything. But whatever it is, I can see a clear path with Asher on the way out.

This would then, conveniently, allow him to still shoot OITNB — which is honestly were we really need him — and appear in occasional flashback episodes for HTGAWM. And then all would be right in our television world.