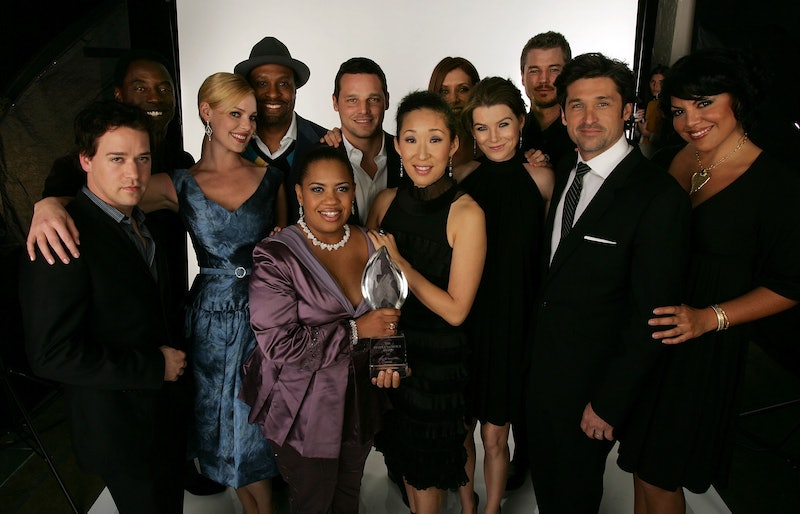 If you're a character on Grey's Anatomy and you find out you're pregnant, you're doomed. Bailey gave birth to Tuck as her ex-husband's life hung in the balance, Callie's baby was born while she was unconscious on the operating table with life-threatening injuries from a freak car wreck, and not too long ago, Meredith welcomed her son into the world in the middle of a massive storm that caused a blackout in the hospital. I should have known this meant that Shonda Rhimes would never allow Jackson and April to deliver their bundle of joy without a hitch, but for some reason, the most recent spoilers about April's pregnancy going wrong have hit me like a ton of bricks.

According to the promo for this week's episode — Episode 8, "Risk" — Stephanie and Arizona are going to discover something that could be seriously wrong with April's unborn baby, and since the synopsis for the episode says there will be a "devastating diagnosis," I'm thinking this is it. ABC also released another clip from the episode of Stephanie giving April an ultrasound for practice. Not only does she accidentally reveal that baby Avery is a boy (yay!) but she also mentions that his legs are crossed like Buddha — and looks really, really worried when April says he was sitting like that in his last ultrasound, too.

Being that I'm not a doctor, I have no idea why that may or may not be a bad sign, and the only thing my research turns up is that there could be a risk of amniotic bands on the baby, which, if severe enough, could cause a fatal deformity in the baby. This would certainly explain why Stephanie's so freaked out. Last time a cast member was faced with amniotic bands, it was Mark Sloan's daughter, and Addison promptly appeared to save the day.

If only the hospital had a world class fetal surgeon on its staff! Oh, wait, it does — Dr. Herman, played by guest star Geena Davis. Oh, but what's that? Dr. Herman has a secret brain tumor that might as well be a ticking time bomb? And wouldn't it be super typical of Grey's for that time bomb to go off while she was in the middle of operating on April's baby? I'm not saying this will happen, I'm just saying I definitely wouldn't put it past the Grey's writers. And being that we've already been promised multiple cliffhangers, this would definitely be a big one.

The future of April and Jackson's baby is looking pretty bleak right now, and my fingers are crossed that I'm wrong. Baby Japril, please come into the world safe and sound, otherwise I'm going to have a reason to cry while I watch Grey's in addition to the fact that I'm still not over the Callie and Arizona breakup. And I'm not sure if I can handle that kind of emotional distress right now.