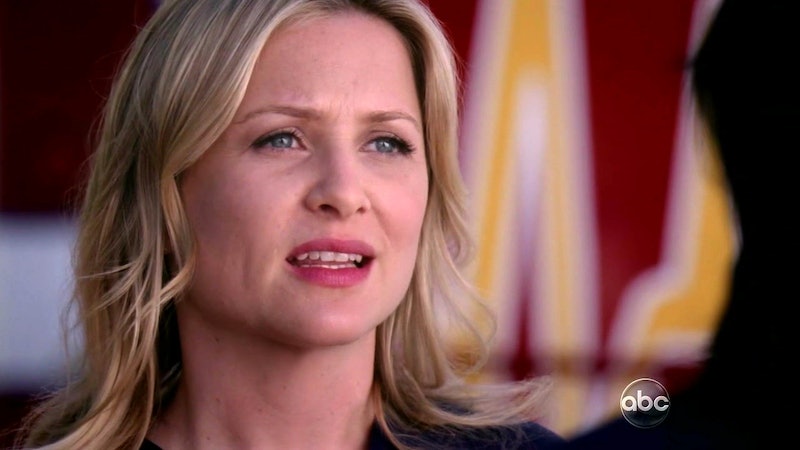 Fans learned earlier this week that Geena Davis' Grey's Anatomy character would have a major story arc this season, and on Thursday we learned what that meant. In the final moments of this week's episode it was revealed that Arizona Robbins' mentor Dr. Nicole Herman is dying of a brain tumor. The famed fetal surgeon has only six months to live. This is tragic news for her, of course, but it's also going to affect Arizona in a major way.

Still reeling from Callie breaking things off between them, Arizona is throwing herself into her work. Partially this is because she blames her fellowship with Dr. Herman for being the nail in her relationship coffin. "I traded my marriage for this job," Arizona told Alex Karev. "It's all I have right now." Aw, Arizona. Don't blame yourself too much, OK? Callie isn't perfect either.

But if going through a divorce and starting a hardcore fellowship with the short-tempered Dr. Herman wasn't bad enough, her mentor's brain tumor is really throwing a wrench into things. For one: Dr. Herman is asking Arizona to keep her condition a secret. She knows if the board finds out they'll likely stop letting her practice medicine and since Dr. Herman is one of about five fetal heart surgeons in the country she thinks the field can't afford her absence.

Arizona says she's uncomfortable being asked to cover this up, and she should be. What if something happens and someone dies? Arizona is technically an accessory because she didn't tell anyone this info right away.

But adding to that stress is the fact that Arizona's fellowship is supposed to be a year long, but Dr. Herman only has six months to live. Now Arizona is going to have to shift into overdrive and learn double the material in half the time. I guess it's a good thing she's not with Callie anymore because she does not have time to be a wife right now.

The episode ended with Arizona being unsure about the whole thing, but let's be real, she's gonna do it. Even if it means double the work load and keeping secrets. Arizona is a driven doctor, and like she told Karev, this is all she has right now. Plus she's always loved saving those tiny humans.

As much as I know fans want to see Callie and Arizona get back together, things aren't looking good for Calzona—and this added work stress isn't going to help. But hey, since Arizona was blind-sighted by Callie's admission that she wants out of the marriage, perhaps Arizona can use this crazy work schedule to take her mind off things for awhile. If she can pull this off, it'll be nothing short of a miracle. But Dr. Herman seems to trust her, and I know she'll be able to handle whatever is thrown her way in the next strenuous six months of her career.

She's already lost everything else, so it's about time something goes her way.

More like this
We Finally Know When 'Grey’s Anatomy' Is Coming Back
By Brad Witter
What’s New On Netflix: 'Stranger Things' & 'Mean Girls'
By Arya Roshanian
At 14, Kate Berlant Had A Wheelie Backpack & One Line In 'Lizzie McGuire'
By Samantha Rollins
James Marsden Kept Teddy’s Westworld Season 4 Return A Secret “For Years”
By Brad Witter
Get Even More From Bustle — Sign Up For The Newsletter