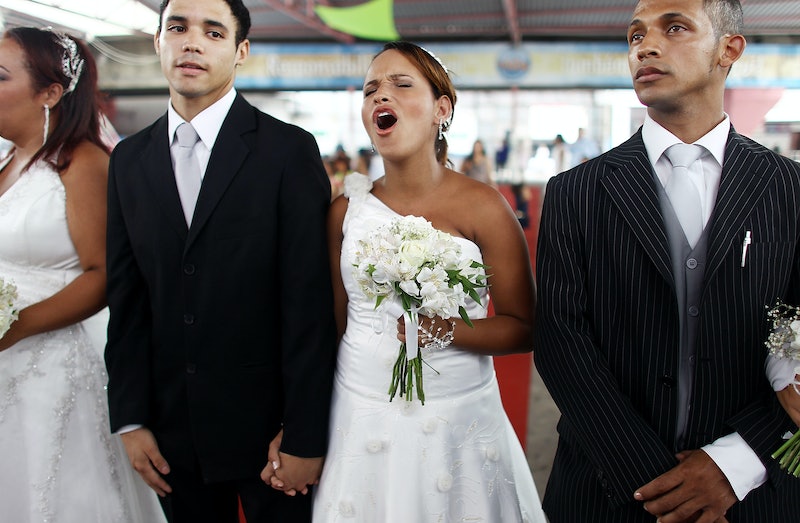 Women hear over and over again how difficult — even potentially impossible — it is to "have it all." But it might be women's husbands, rather than kids, that hold us back, according to a Harvard Business School study. Love, guys — it's a doozy.

The study surveyed more than 25,000 graduates of Harvard Business School, focusing especially on those with MBAs, and found that societal assumptions about ambitious women don't really hold up. For one thing, the idea that even ambitious, successful women often "opt out" in favor of the "mommy track" really doesn't hold up.

Although a majority of both men and women felt that women's No. 1 barrier to advancement is “prioritizing family over work," in reality, only 11 percent of women surveyed were out of the work force in order to care for children. And among women of color, the number was even lower, only 7 percent. In fact, among those women who did leave work, most did so only out of necessity, not because they were dying to be full-time moms.

So much for the "mommy track."

In fact, this research suggests that the real "mommy track" isn't something that women choose but something that's foisted off on women who have kids. Women who want to scale back to part time while their children are young, the study found, tend to be stuck with boring, unchallenging work and are no longer considered viable for promotions or advancement. Women are looking for a work- and home-life balance; companies just assume they're no longer interested in their careers. In other words, instead of "taking the mommy track," it's more accurate to say women are "mommy tracked" against their will.

But long before motherhood, women acquire a completely separate, unacknowledged stumbling block to their careers: a husband. Or, more specifically, a husband who probably assumes his career takes priority. According to this research, the vast majority of women assume that both their and their husbands' careers will be of equal importance. But they are apparently alone in thinking that; more than half of all male Baby Boomer and Generation X Harvard Business School graduates assumed that their careers would take precedence over the careers of their wives. (Notably, this attitude was less common among men of color than among white men). Moreover, men assume that their wives will take on more of the household and childcare responsibilities, while women are once again looking for something a little more egalitarian.

Unfortunately, when it comes down to it, the men wind up being right about how things will really work in their marriages. The research shows that husbands' careers take precedence over their wives', while women get saddled with most of the housework and child-rearing duties.

So is the takeaway here that smart, ambitious women who care about their careers should just never get married? Not really. Smart, ambitious women can and should do whatever they want. But this data does point to a troubling disconnect between the way our society perceives gender disparities in the workplace and the ways in which they actually manifest.

So much of our cultural discourse around things like the gender pay gap or the lack of female executives includes a lot of talk about women's decisions. These inequalities are often held up as the result of choices women voluntarily make. But as we see in this study, overall there is really nothing voluntary about it. Not only do very few women actually leave work specifically to care for children, but those that do often only do so because they feel they have to, not because they want to. And women definitely are not on board with having their husbands' careers treated as more important than their own, or with taking care of all the parenting responsibilities and household chores.

So really, the takeaway here is that before getting married, it's probably a good idea to make sure that you and your husband both understand that you are a team and you are equals. Neither career matters more; neither person is too good to do the dishes or too busy to pick up the kids from school.

More like this
The Best Time To Date After A Breakup, According To Experts
By Bustle Editors
20 Things You Should Never Tolerate In A Relationship
By Rachel Sanoff and Kathleen Ferraro
12 Ways You're Sabotaging Your Love Life
By Teresa Newsome and Lexi Inks
25 Things I've Reduced My Life To, In Addition To WFH In My PJs
By Ginny Hogan
Get Even More From Bustle — Sign Up For The Newsletter