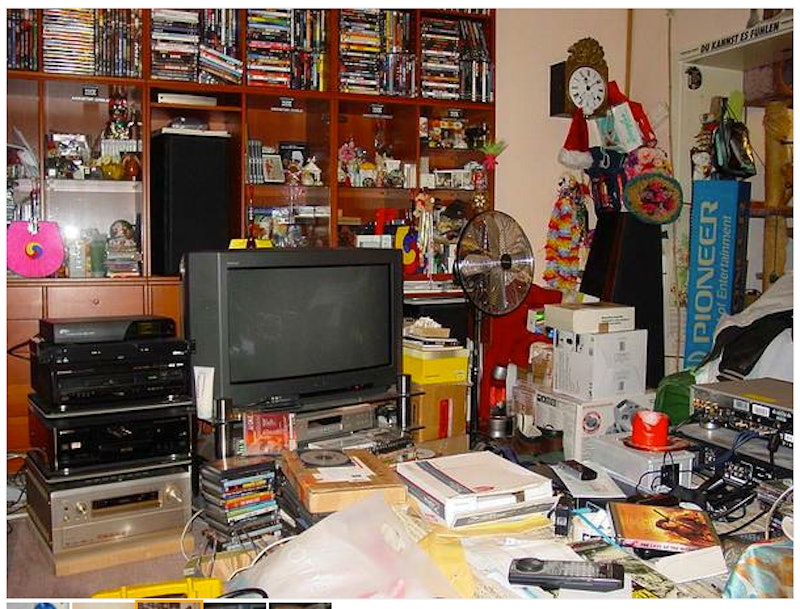 I've lived through some dark, depressing times in my life — unemployment, parental divorce, the cancellation of Don't Trust the B in Apartment 23 —but none of them can hold a candle to my time trying to find a New York City apartment on Craigslist. I don't know what apartment-hunting is like in other cities, but in New York, it's a blood sport — a pursuit full of anxiety, confusion, and rushed apartment viewings, often conducted by sleazy brokers trying to pass off an empty utility closet with a drain in the floor as a "junior one bedroom." It's enough to drive you to the edge of madness — especially when you call those brokers a few hours later to say, "OK, fine, I'll live in a utility closet with a drain in the floor, I accept that this is my lot in life," only to find that it's already been rented by someone who was willing to pay three months rent, up front and in cash.

The terms laid out and questions asked in Craigslist roommate ads feel like they are purposely crafted to remind you of how alone you are, and how few options you, the apartment seeker, have: Are you cool with ferrets? Do you do, like, a lot of your sleeping between the hours of 11 p.m. and 5 a.m., because that's when I usually have band practice? How open are you to me periodically entering your bedroom for some light LARPing? How do you feel about doing some nude housecleaning? How would you describe your stance on "me stealing your stuff"? And yet, just like in dating profiles, we ignore those red flags because, well, what choice do we have?

I've been lucky enough to live in the same place for the past five years, so the Craigslist real estate treadmill became a faint memory to me, one only revisited when I am forwarded a hilariously baffling Craigslist roommate ad by friends. I laugh, forgetting that there was once a time when I was so desperate for a place that I wondered if I could stand to do some nude housecleaning in exchange for a reasonably priced bedroom. I had forgotten that the desperate lives chronicled in the Craigslist roommate ads had once been my own.

So , after writing a whimsical guide to Craigslist apartment listing terms, I decided to follow up by posting a fake ad to see what kind of responses such an (I thought!) unappealing living situation would receive. I'm not sure exactly what I expected. I just worked hard to make the ad a believably realistic nightmare, like the same ads I had seen passed around in funny email chains or on "news of the weird" blog posts. I'd read those ads and think, Oh my god, there's no way this maniac could have expected anyone to respond to this, right? Well, I was wrong.

Here is the ad I posted:

(For non-New York readers, the neighborhood I listed isn't even real — it's three different neighborhoods that are not all particularly close to each other, and definitely nowhere near Coney Island or the Empire State Building.)

I put the ad out into Internet land and waited to see what happened. Would everyone just assume it was a joke and pass right over it? I figured that I could count on anything, it was getting a few emails telling me I was crazy and that I should go screw myself — hey, what's a day on the Internet without a few people telling you to go to hell? I also thought that maybe I'd get an email from a person who sounded as crazy as the character posting this ad — maybe some Kramer-from-Seinfeld types who thought the room sounded ideal for their home beef jerky business, or people who would be like "I'm the perfect roommate, I've been lying horizontally on the toilet the whole time!"

What I was absolutely not prepared for was receiving only completely normal, thoughtful emails, from people simply looking for a place to live. I received every genre of email you get when listing a room — the earnest email that proclaims the potential roommate quiet and hard-working, the funny email that shows you the potential roommate is a good time, the desperate email from someone who just needs a place to move ASAP. I was shocked.

Each and every one of these emails absolutely broke my heart. Because every single email treated the ad like it was completely normal — as if I had been describing a normal roommate share situation, in the middle of totally normal neighborhood that actually exists, one that did NOT require you to share children's bedding with a feline. It blew my mind.

I knew that it was getting tougher and tougher to find any place in the city that a regular person could afford. I'd read the op-eds and the trend pieces; I'd seen that average New York City rents had risen 67.2 percent between 2000 and 2012, a period of time when rent in the rest of the country only rose by 50 percent. The median NYC rent since 2000 had increased 75 percent, too, while NYC incomes had dropped 5 percent over the same years. Was that why people were willing to live on a bunk bed with a cat, with an obviously deranged person as a roommate, in an apartment where you need to plank in order to poop in the toilet, in a neighborhood that doesn't even exist? I wanted to burst into tears.

And then I remembered that, not that long ago, this had been me, too. When I moved to New York in 2005, I interviewed for an open room I'd found on Craigslist, in a dank apartment that seemed to contain no cats, yet smelled like it contained all of the cats in the world. My interviewer was a woman who ran her own company that conducted Sex and the City tours, and even in our five-minute interview (conducted under a flickering light straight out of a Nine Inch Nails video, natch), she seemed like kind of a dick. And yet, when she turned me down for this apartment — what I had thought, at the time, was my last shot before I had to move back home with my dad — I was furious and wounded. So furious, in fact, that I saw her on the subway earlier this year, remembered the story, and found that I was still mad at her. That's how dark the New York City real estate situation has been for a long, long time.

But I got to eventually find a place I could live, and do whatever it is I came here to do (which is apparently write blog posts about strangers who I feel have wronged me). I didn't feel as hopeful that the people who replied to my ads would get the same. I hoped they would. Traditionally, wrangling with New York City housing has been a rite of passage, one that was unpleasant in the moment, but one that you could also count on eventually passing. I hoped that responding to my ad just was just part of that experience for them.

But I think there is something more sinister afoot now. New York affordable real estate suffering is no longer glamorous suffering that you eventually emerge from, all the stronger for it. It's just regular suffering, that kind that just beats you down because it can. With absurd real estate prices that seem to be looking to drive out everyone except absentee millionaires looking for a pied a terre, we may all be considering sharing a bed with a stranger's cat soon, wondering how this could all possibly be worth it. I mean, is it? I have no idea. But I can tell you that, right now, New York real estate seems like it's a joke without a punchline.