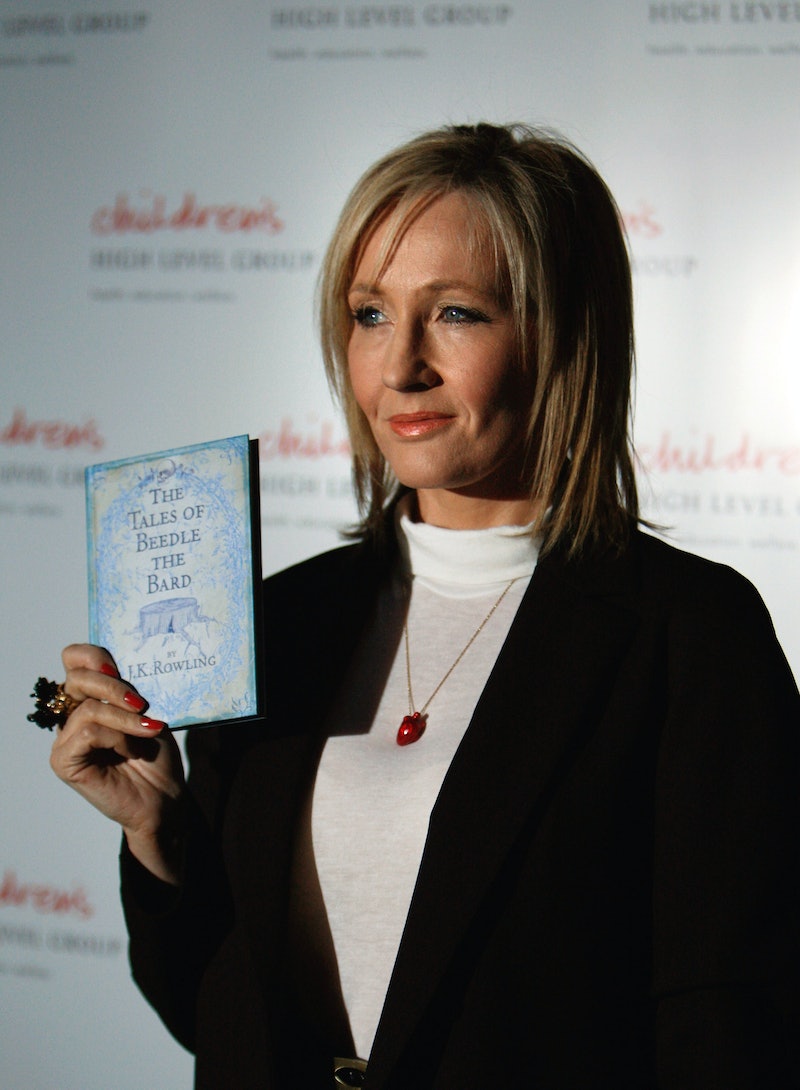 You might have heard the rumors swirling around recently, that J.K. Rowling had announced she was planning on writing more Harry Potter books. They were, of course, false, but apparently masking a little bit of truth. The series' author announced on her official Facebook today that she, J.K. Rowling, is writing the script for a movie set within the Harry Potter world, but with different characters. Still, any Harry Potter fan should be at least a little familiar with the source material.

Fantastic Beasts and Where to Find Them is the textbook that Hogwarts students use for their Care of Magical Creatures class, and it was released to the muggle world in 2001, along with Quidditch Through the Ages, a book on everyone's favorite flying sport. Now, Rowling is writing a script based on Fantastic Beasts and its "author," Newt Scamander. Rowling gave a more detailed description of the film in her post.

Although it will be set in the worldwide community of witches and wizards where I was so happy for seventeen years, 'Fantastic Beasts and Where to Find Them' is neither a prequel nor a sequel to the Harry Potter series, but an extension of the wizarding world. The laws and customs of the hidden magical society will be familiar to anyone who has read the Harry Potter books or seen the films, but Newt’s story will start in New York, seventy years before Harry’s gets underway.

This movie has tons of potential, and is extremely notable for the fact that Rowling will serve as the screenwriter. She didn't write the script for any of the Harry Potter films and only accepted a producer credit for the two Harry Potter and the Deathly Hallows movies. Now that she's in charge, the film is likely to be amazing.

The wizarding world is filled with amazing magical creatures, which we've only gotten a glimpse of in the eight Harry Potter films. Think of the Buckbeak the flying hippogriff, the thestrals only visible to those that have witnessed death, unicorns, centaurs, Luna Lovegood's elusive Crumple-Horned Snorkack.

Rowling can undoubtedly come up with many more intriguing animals to populate the film, as well as fleshing out Scamander as the main character. Right now, all we know about him is, as Rowling mentions in the announcement, his grandson Rolf Scamander went on to marry Lovegood and have twins with her. Rowling points out that "hard-core Harry Potter fans" will know this, as it wasn't revealed in the series but rather a hand-drawn family tree Rowling released, detailing the future families of the series' main characters.

This announcement also opens up tons of possibilities. First, could a Quidditch Through the Ages film follow? The two textbooks were released together, and if Fantastic Beasts becomes a success, Warner Bros. will definitely want a follow-up. There's just as much material to mine in the sport's world as there is in that of Scamander and various creatures.

What about recognizable Harry Potter characters? Sure the main trio won't exist yet, but what about the wizards who have magically-induced life-spans? One of Voldemort's goals was to live forever, and by the time Harry came around he was easily 70. Hagrid attended Hogwarts at the same time as him, thanks to being a half-giant he has a longer life-span too, and we all know how he feels about beasts.

Dumbledore was supposed to be over 100-years-old during the Harry Potter series, maybe he visited New York a few times before becoming headmaster. The fact that these characters were alive during the events of Fantastic Beasts doesn't mean they'll appear, but if Rowling wanted to have a few tie-ins between the stories, they would be the way to do it.

But let's not get ahead of ourselves. This is great news for any Harry Potter fan, whether or not they are familiar with Fantastic Beasts already. Re-reading the books and re-watching the movies is great, but Fantastic Beasts will finally give us some new material to obsess over.

It might even be better for being distinct from the events of the Harry Potter books, because we'll be exposed to a whole new side of the world that Rowling has created. Plus, there are casting announcements, posters and trailers ahead of us, and t just feels good to have Harry Potter in the news again.