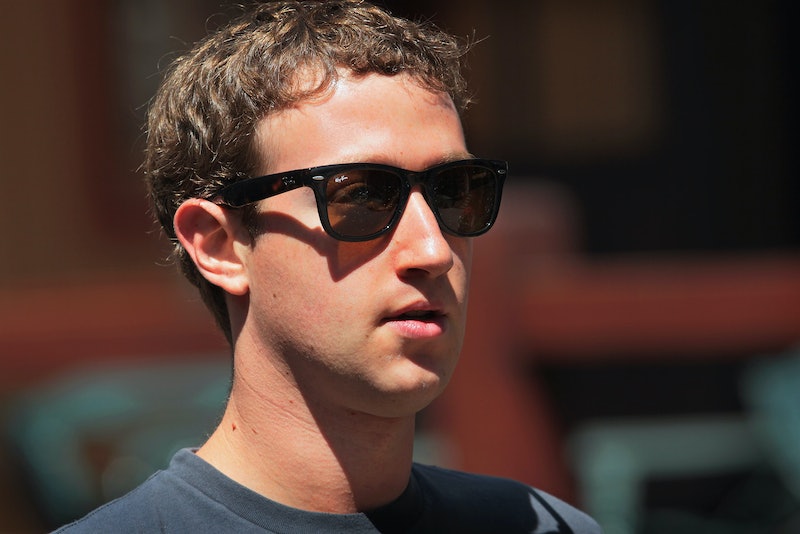 Well, if Zuckerberg has his way, that'll be his next stop. The Facebook founder has his fingers in a whole bunch of pies at the moment: immigration activism, bipartisan funding, health and science advocacy, and of course entering a festival via helicopter to help fry grilled cheese sandwiches. (Yes, really.)

On Thursday, the Facebook founder will meet with chief House Republicans to discuss a range of issues, because, you know, the party isn't weird enough as is.

What issues will the Facebook founder bring up when he meets Thursday with House Republican leadership like Speaker John Boehner, and Majority Leader Eric Cantor? Um, pretty much everything: the economy, the tax system, and Internet privacy. He also plans to talk about immigration law, which Zuckerberg has displayed a strong interest in reforming through his advocacy organization Fwd.us. The liberal group (which ironically has been attacked by progressives) would push for easy paths to immigration — which would likely aid Silicon Valley.

Recently, Zuckerberg has been doing pretty damn well (which, for his charmed life, is really saying something.) Facebook's stock is at an all-time high, and a bolstered Zuckerberg has partnered with big-cheese activists to try to give low-income countries Internet connectivity. He's even offering coding classes to middle schoolers. That's all very noble, but these days, you can also find Zuck waxing lyrical about changing the world left, right, and center — from advising Twitter on going public, to criticizing NSA surveillance programs. Which begs the question: Zuckerberg may be a prodigy, a millionaire, and a philanthropist, but does he realize that he's not yet a politician?

In fact, Zuckerberg's never really studied politics at all, having majored in psychology and computer science, with outside interests in classics and programming. There's no doubt that Facebook has legitimately changed the world, and that Zuckerberg has the best of intentions: he's never openly acknowledged his political affiliation, instead encouraging independent, critical thought. Still, it's probably difficult to have that degree of power — Zuckerberg's wealth hovers around the $17 billion mark — and not feel like you have to put it to use.

Zuckerberg has said that his childhood hero is Bill Gates, who is famous for his own philanthropy. Both went to Harvard, changed the face of everyday technology, and are rich and powerful magnates — but Gates is well aware of his own limits, and concentrates his energy on investments and charity (his charitable fund is the largest on the planet). Gates doesn't approach the world's problems with the understanding that he has the foresight to solve them, which is the difference between him and Zuckerberg.

It's understandable that the fame and the fortune may have gone to Zuck's head. But taking on leadership roles in political capacities can have dangerous results when you're not trained or particularly educated in politics. With the road Zuckerberg has been going down, don't be surprised if you're hearing rumors of Zuckerberg for president, 2028.