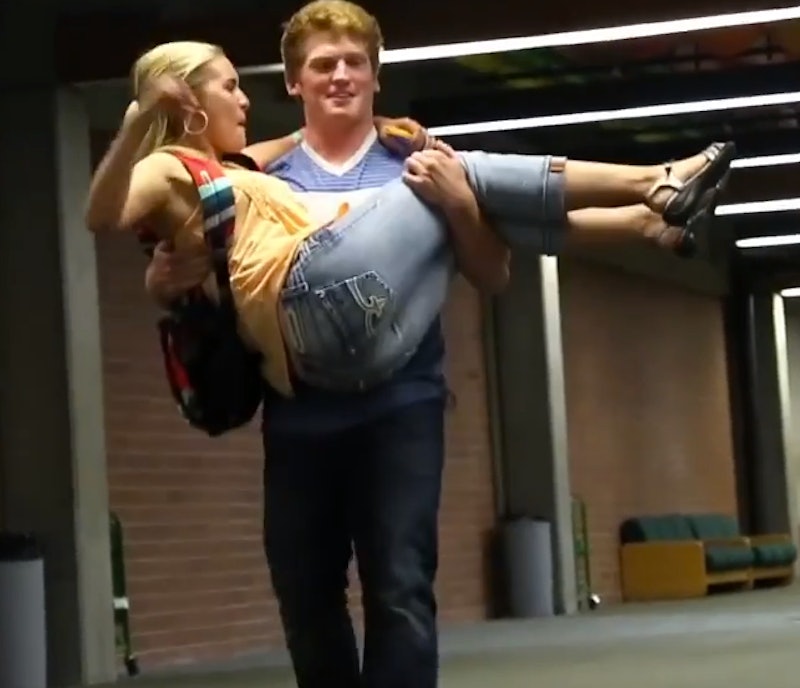 And the award for making everyone the most uncomfortable goes to…

Two guys at Utah Valley University who decided for who knows what reason that it would be fun to go around trying to pick up women. Literally. As in lift them off the ground and carry them. They call it “Sweeping Girls Off Their Feet.”

There are a lot of problems with this video — the complete invasion of personal space or the fact that women already have enough to worry about without adding ‘getting picked up by some weirdo stranger and filmed as part of a viral YouTube video’ to the list.

Shockingly, a lot of the women are not at all into it. Imagine, you’re going about your day and some person you’ve never met thinks they have the right to pick you up and carry you. Like somehow that is a thing they are entitled to do.

As one YouTube commenter points out, “If a black guy did this it would be called kidnapping.” Amen to that.

Honestly, even the white guys can’t make it seem not kidnap-y. It is kidnap-y. Most of the women, even the ones who laugh along, seem like what they really want is to be put down. Because of course they do. And the worst is when the guys continue to try to pick up a woman who has evaded their initial attempt and clearly does not want them to try again. But they do try again, because consent is clearly not as important as making a YouTube video. And don't even get me started on the "I'm taking you home" comment.

The whole thing is awkward and creepy and weird and if anyone ever tried this with me I would run away from them as soon as possible and report them to campus police.