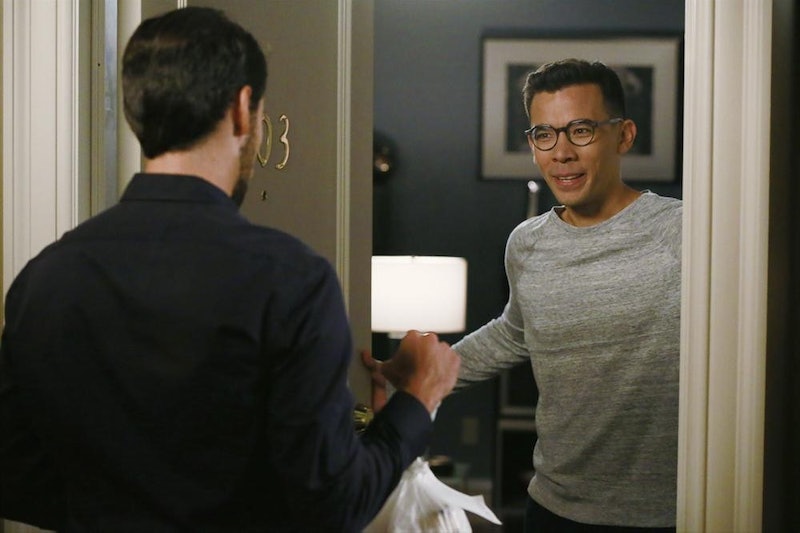 On How to Get Away with Murder, it's the big questions that have been getting most of our attention. Each week we've been given more and more information to clue us in on the show's mysteries. We now know where Asher was during the murder, if Sam knew Lila was pregnant, and that Michaela grew up in a "nasty, backwood, bayou swamp." And come this Thursday, we'll know who killed Sam. Finally. But I still have one lingering doubt the show has yet to answer: Will Oliver (Conrad Ricamora) be back on HTGAWM after the break?

That's right, I'm asking the important questions now. Sure, there's a murderer on the loose, and four grad students who burned a body, but what I'm really concerned about is if Connor and Oliver will get back together during the midseason finale. I'm just all about the love, really. Normally, considering Connor's track record with guys, I would bet money on never seeing the IT guy again. But Connor has shown that, no matter how hard he tries to pretend he has no interest in romance, he's actually still hung up on Oliver. And in the midseason finale, we'll get to see more of that scene where the bad boy goes to Oliver's apartment for help.

Not exactly Connor's best moment. If I was in Oliver's position, I would not be so quick to just let this guy back into my life. Oliver seems like a rational fellow. He knew Connor was bad news when he found out he cheated, so he dumped him immediately, and hasn't looked back since. Now, Connor shows up on his doorstep looking a wreck and declares he "screwed up?" No thanks, I'll stick with the random muscly dude we saw tell Connor to beat it when he tried to give Oliver a bouquet. Oliver has other prospects. Based on the fact that Connor went to him when he had nowhere else to turn, I'd say Connor doesn't.

But maybe that desperation is the reason Connor and Oliver need to get back together. There are obviously still some feelings there, on both sides. Connor cares enough to run to Oliver when he's at his lowest point, and Oliver still feels the need to complain about Connor to his newer hookups. Sounds like the ideal couple. OK, not really, but wouldn't it be nice if these two crazy kids could patch things up? Connor could see what it's like to actually be in a loving relationship, and he could help Oliver continue to build his confidence. And they both could get back to their favorite couples activity: illegally hacking into other people's computers to gain information that will then be used against them during trial. Fun!

If there's any hope of seeing Oliver in the second half of Season 1, he and Connor are going to have to work on their issues — starting with Connor's recent foray into murder. Not exactly the best place to begin a relationship, I'll grant you. But if anyone could charm Oliver back into being boyfriends, it's Connor. As you may have noticed, these two have pretty excellent chemistry.

Yeah, I don't think we've seen the last of Oliver.

More like this
15 Photos Of The 'House Of The Dragon' Cast At The Show's UK Premiere
By Radhika Menon
Megan Thee Stallion Actually Auditioned To Be This 'P-Valley' Main Character
By Radhika Menon
The 'Better Call Saul' Creators Said "Never Say Never" To More 'Breaking Bad' Spinoffs
By Brad Witter
What's New On Netflix: A Third '365 Days' Movie & Lili Reinhart’s New Film
By Arya Roshanian
Get Even More From Bustle — Sign Up For The Newsletter