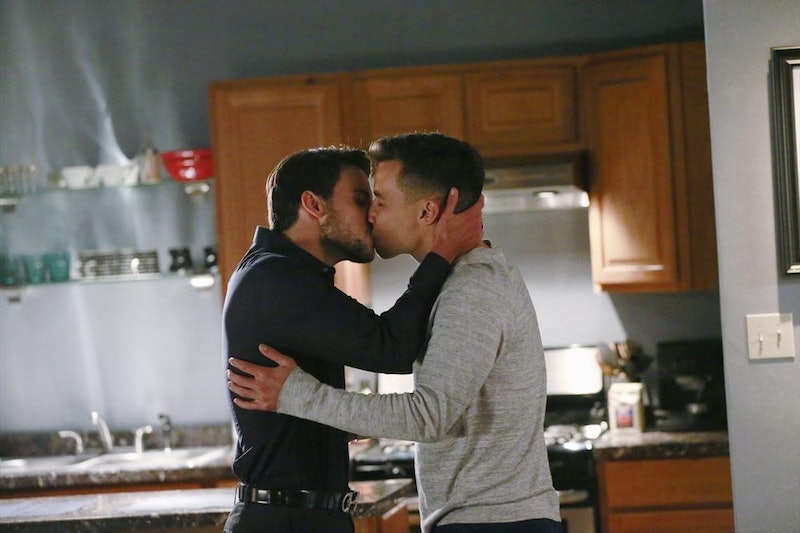 For me, one mark of an excellent television show is when I can't decide who my favorite character is. On ABC's How to Get Away with Murder my loyalties shift constantly. I laugh at Asher. I cheer for Michaela. I roll my eyes at Wes and I'm fascinated by Rebecca, for now. This week I fell for Connor Walsh, and particularly Connor's relationship with Oliver the IT Guy, Coliver, if you will.

When it was revealed that Connor visited Oliver on the night of Sam Keating's death and finally broke down (just like Michaela had done earlier), my heart panged a little bit. Now, everyone loves Connor. He has no problem getting what he wants from anyone he wants. Even Michaela's fiancé Aidan was seduced by Connor's devilish charm back when they was young and unafraid at Hogwarts (or whatever American boarding school is like — I'm just making assumptions). However, something is different with Oliver and we can all see it written on Connor's face. Sorry, dude. You've got it bad for the IT guy. In case you were wondering and haven't yet Googled, there's already "Coliver" fanfiction and fan videos out there for your perusal. The relationship may be dunzo for now, but will Connor and Oliver get back together? I'm rooting for "yes!"

Besides just liking them together, Connor could benefit from the stability that Oliver might be able to provide. And when I say that, please know that I am not slut-shaming him. Honestly, I'm not. Connor has now watched a man commit suicide after he exposed his crimes and is covering up the murder of his professor's husband. That's traumatic stuff and he needs a support system. Think of it like Katniss and Peeta. Stability can just mean the hug that calms your panic attack.

Am I thinking about Season 2 already? It sure seemed to me that when Connor showed up at Oliver's door in the flash forward, they had not spoken since the breakup in the next scene. I don't think we're gonna get to that point in the present for several weeks, if not the whole season.

Oliver actor Conrad Ricamora has been in three episodes so far and I'm sure there are other hackers that the kids can find to do their dirty work, but Oliver is too good of a character to ignore. Anyone who can soften Connor's smarmy exterior is a keeper — even if Connor thinks takeout makes up for missing a dinner date. Hopefully, when we see more of Oliver, it won't only be in flash forwards.

But are these two crazy kids endgame? The way I see it, they will patch things up eventually because Connor's character is taking a route that seems to compare to Michaela's devolving relationship over the course of the show. Michaela started off the series happily engaged and, while she is still engaged at Christmas, the cracks are beginning to show. Connor started off the series happily a bachelor and, while he is still single at Christmas, those cracks are beginning to show as well.

This mirrors what we know about bonfire murder flash-forwards. While they both disagreed with Wes' plan to dispose of the body, they reacted in opposite ways. Michaela broke down at Professor Keating's office where they found the body and was only able to regain her cool a few times during the night. She was ultimately fine. Connor, on the other hand, has kept some kind of crazed cool throughout the night only to have a complete meltdown at Oliver's apartment. These two characters are such fun foils that I wouldn't be surprised if we saw Connor become monogamous at some point down the road. Oliver the IT guy is certainly the man for the job.