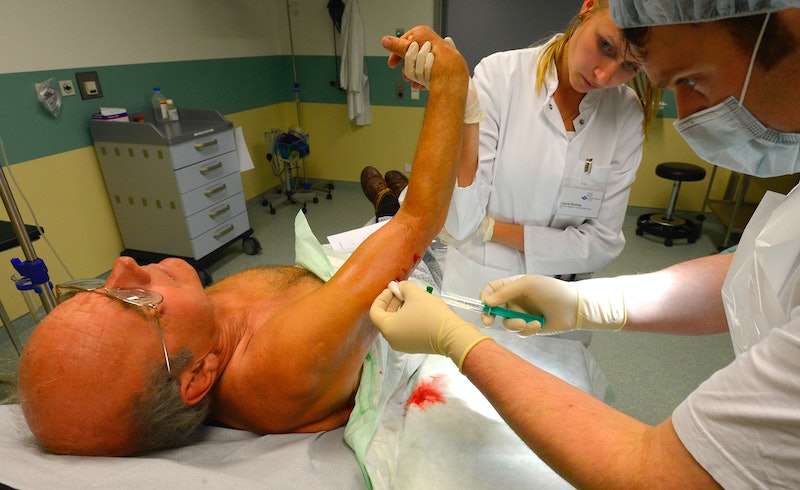 Turns out that in order to be an alpha male, you need estrogen.

According to new research from Massachusetts General Hospital in Boston, a lack of estrogen in a man's body can cause some serious problems. A shortage of the "female" hormone can cause fat accumulation in men with low testosterone levels, leading to increased risks for cardiovascular disease and diabetes. The study also found that low levels of estrogen in men are partially responsible for sexual dysfunction and lower libido — problems that were previously blamed solely on a lack of testosterone.

The new study could seriously change the way doctors look at prescribing hormones for men.

Typically, men make about 80 percent of their estrogen through the conversion of testosterone into an enzyme called aromatase. When a man's testosterone drops, so does his production of estrogen. And that's bad news.

Low testosterone can lead to a decrease in lean muscle mass as well as muscle size and strength. And a drop in estrogen can lead to weakened bones in men in much the same way it does in post-menopausal women. Men's testosterone levels begin to dip around the age of 35, first impacting sexual function. Sometimes, this is called "male menopause."

The study also challenges the one-size fits all theory of how much testosterone a man should have in his body. Even though there have been concerns with the treatment, the number of men over the age of 40 who are receiving hormone treatment for low testosterone tripled to three percent between 2001 and 2011.

The researchers studied 400 healthy men between the ages of 25 and 50, reducing testosterone production and then using a variety of remedies. In cases where they replaced testosterone but continued to keep estrogen production suppressed, men showed significant increases in fat production, decreased sexual desire, and increased erectile dysfunction.

Researchers are hoping to repeat the study on older men in the near future.

More like this
How 5 People Upended Their Lives To Fight For Abortion Rights
By Hannah Smothers
Travis Barker & Kourney Kardashian’s Updates About His Health Are Promising
By Stephanie Topacio Long
I Was All For Medicating Mental Health Issues – Just Not For Me
By Anonymous, as told to Dana Smith
The UK Abortion Laws In 2022, Explained
By Sophie McEvoy
Get Even More From Bustle — Sign Up For The Newsletter