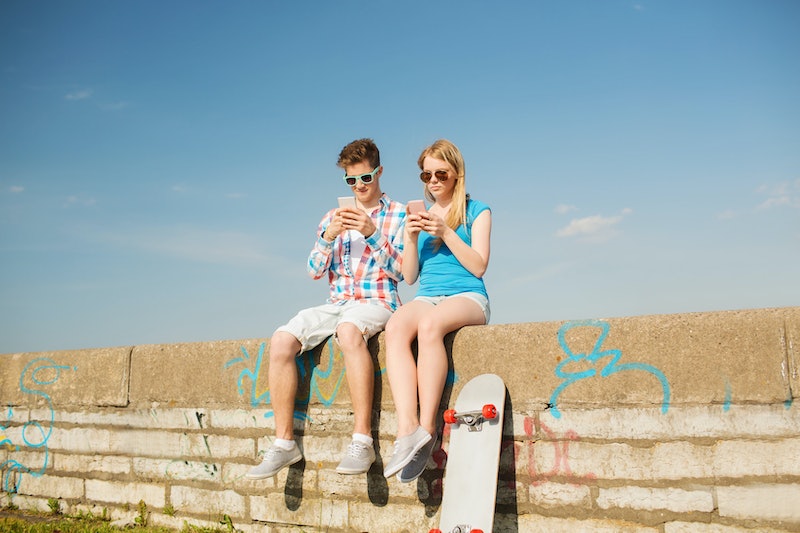 By now, you've probably heard the bad news about "text neck," a medical condition caused by the downward angle we hold our heads at while texting, emailing, and otherwise using our smartphones. The pressure that bending our head down puts on our necks creates text neck's side effects, which can include strained muscles, pinched nerves, and herniated discs (yup, the same kind of herniated discs that often require surgery). Doctors even worry that, if nothing is done to correct it, text neck could eventually even lead to the neck's natural curve being distorted.

But is that really a scary enough risk to get you to cut down on the two to four hours that the average American spends on their smartphone each day? Will that really stop you from Snapchatting a picture of yourself drinking a chestnut praline latte right now? Probably not. Maybe you're thinking, "Who cares? By the time I get old, we'll surely all have robot necks and this won't be an issue."

Fair enough. I, too, hope for a future where robot necks are cheap and plentiful. But the health problems created by texting don't end with text neck. Texting may allow you to stay in touch easily, make plans on the fly, and never have to make a godforsaken phone call ever again — but it can also strain your back, your eyes, and your romantic relationships, change the way teenagers' brains develop, and even shorten your life expectancy. Freaked out yet? Read on, and discover all the ways that the easy technology of texting can make your life harder in the long run.

TEXTING CAN STRAIN YOUR BACK (AND THE REST OF YOUR BODY)

Your neck isn't the only physical area strained by the smartphone slouch. The bad posture that most of us use to text also effects our backs — in fact, doctors are finding that the lower back pain problems caused by sitting at a desk that traditionally plague office workers have been replaced by upper back and shoulder issues, caused by using our smartphones with improper posture. And the problems that bad back posture due to texting can cause are truly shocking: beyond muscle strain, bad posture can lead to headaches, depression, constipation, and even heart disease.

So how can you avoid this total health nightmare? Just by standing up straight. Crazy, right? But good posture, in addition to helping you avoid all these problems, can actually increase your body's serotonin production levels, too. So it's probably worth it to take three extra seconds and hold your phone up to your face, instead of vice versa.

TEXTING CAN HURT YOUR EYES

You may have had a hunch that spending hours a day squinting at a computer screen the size of a deck of playing cards is not ideal for your eyes — especially if you've noticed your eyes hurting or getting dry after your third hour of playing Words With Friends. Eye dryness, eye strain, head and neck aches, and blurry vision caused by spending hours staring at a screen all stem from a problem called "computer vision syndrome." Computer vision syndrome isn't a texting-specific affliction — any time spent looking at a computer screen can cause it. But spending time looking at a tiny screen in particular can put additional strain on your eyes.

TEXTING CAN HURT YOUR RELATIONSHIP

Sure, texting can certainly help your relationship — it's an easy way to tell your boo that you'll be getting home late or that you're thinking of them. In fact, researchers at Brigham Young University who surveyed the texting habits of 276 adults aged 18 to 25 found that 70 percent of their subjects said that technology improved their relationships.

Study researcher Jonathan Sandberg noted that using text messages to hash out important relationship issues can strain a relationship's emotional development and the bonding of the pair in it, because "[t]here is a narrowness with texting and you don’t get to see the breadth of a person that you need to see.”

Won't someone think of the children?! A 2010 Canadian study on the link between texting and adolescent brain development found that teens who used smartphones frequently performed worse on tests measuring memory and attention span than teens who used their phones less often. Epidemiologist Dr. Michael Abramson, a professor at Monash University and the lead researcher on the study, postulated that this might be because smartphone technology like predictive text trains teens to work too quickly and make frequent mistakes.

In addition, many physicians and psychologists believe that the teenage culture of heavy texting — in 2009, the average teenager sent and received 82 texts a day — can lead to depression, anxiety, and declining academic performance for adolescents.

TEXTING CAN SHORTEN YOUR LIFE EXPECTANCY

And finally, it turns out that texting your life away can lead to literally texting your life away. A 2014 study by the U.K. Chiropractic Association found that the traditional hunched posture we assume while texting can put pressure on our internal organs and prevent us from taking a full breath. It can also possibly lead to hyperkyphosis, a curvature of the spine. The disease — which causes sufferers' backs to become permanently rounded and hunched — is linked to a decline in physical functionality later in life, as well as a decreased life expectancy. So it turns out that even if you're cautious about not texting while driving or crossing the street, texting still may eventually find a way to kill you.