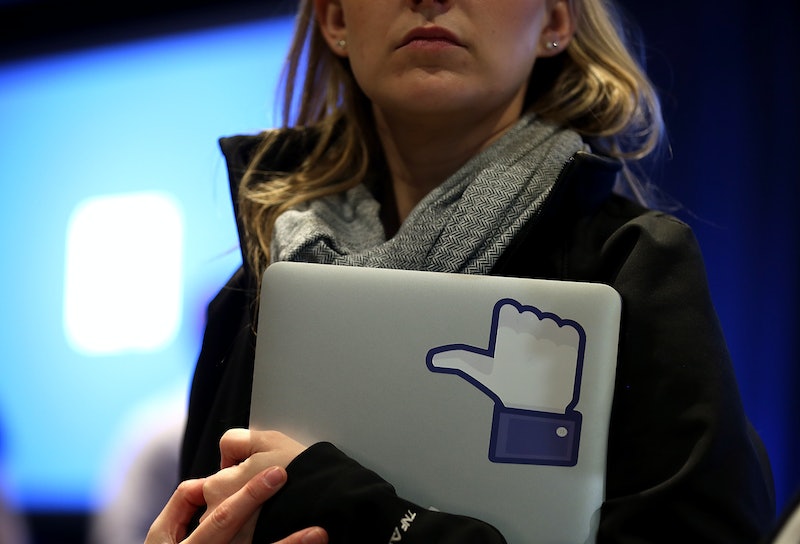 We live in an era where our Facebook status, Twitter handle, and latest Instagram pic say more about our personalities than our actual, human form. We all know this is totally insane, but for better or worse, we're coming to accept it as the new reality of how we build our identities in the 21st century. Like, I can probably pinpoint what your exact mood is just by reading your latest Tweet, or listening to the music video you just posted. It’s not like mind-reading is involved—our digital selves are just incredibly representative of who we are as people.

I remember taking an advertising course in college, and we were covering the rise of social media in marketing. My professor gave us a good 20 minute lecture on why we shouldn’t be posting all of our party pictures on Facebook because our profiles would be viewed by managers and CEOs of companies we would someday apply to. *SNORT* As if. This was back when grown-ups were still asking their kids how to send text messages. There was NO way my future boss was going to judge me based on my social media presence.

But when there’s a will, there’s a way—and there was most definitely a way with social media platforms. Don't think that how you carry yourself on Facebook, Twitter, Instagram, or any other site doesn't tell people a lot about you. So if you're acting a fool online, stop it. Here are some general things you want to avoid on social media:

Complaining about your job

Even if you were forced to eat raw banana peels, sit through the most inane meeting ever, or deal with the most insufferable customers in the universe, you really shouldn’t vent online. Even if you think you’re getting fired, the worst thing you could possibly do is throw shade at your employer. Someone will see it. And someone will think, “Wow, that was a stupid move.” Because it’s SUCH a stupid move. Even if your present employer doesn't see your complaints, or even if you've already quit, potential future employers could see it, and who wants to hire someone who clearly isn't afraid to trash-talk their company when they're upset? No employee is happy all the time, but every employer would prefer to hire people who handle their issues like adults, behind closed doors—not in front of the whole world.

Watching Twitter fights is like my favorite reality TV. There are so many angry, passionate, misguided people on the Internet, that there is basically no real need for Jerry Springer anymore. And like, I understand why we get angry and call other people out on the Internet. A lot of people have a lot of really insane ideas and opinions. But when I start seeing these hour-long chains of back-and-forth Twitter yelling, I start to wonder if you have way too much time on your hands, and like maybe you need to pick up a new book or something. Express your concern, make your point, and the move on.

Of course I needed to see the finger you somehow shoved into a moving blade. I want nothing more in this life than to witness photos of your bloody, mangled body on the Internet as I scroll through Tweets and photos of other people’s brunches and kittens. *barf*

Oh good, I see you’re naked and probably just finished having sex. That’s something I really needed to visualize today, so thanks for that.

I use hashtags for my job so that my posts become more visible, so it's not like I don't understand their purpose. I totally do, I am ~with it~. But when you’re #hashtagging #everything #UnderTheSun, it makes me want to meet the person who introduced you to hashtags and let them know I have no other choice but to turn back time and stop this from ever happening.

People, come on. We all get upset from time to time because life is unfair and cruel, but writing cryptic status updates to lure your friends into a tragic conversation is so not classy. If you have a problem, call someone. Vent to a human being, not Facebook.

Asking for money for your own personal projects

Look. I’m not trying to be a jerk, but when I see you asking for money from complete strangers to finance your poetry, or your nose job, or whatever personal thing that's important to you, I want you to know I am rolling my eyes so hard, that I’m probably developing an aneurism, and when I die, it will be all your fault. Just kidding. Kind of. A fund for your sick kid is one thing, but asking people to support your lifestyle is another. We all have stuff we could use more money for, but crowdfunding wasn't made to help fund our random wish lists.

Everyone is Facebook friends with that one relative’s sister’s husband who will not stop posting homophobic, or racist, or sexist garbage on his wall. First of all, let’s all take a second and delete this guy from our digital life. Second, if you’re that dude posting that crap, please know how much it makes you look like a psychopath (which, to be fair, you totally might be, in which case, nice job accurately representing yourself?).

When celebrities subtweet, it’s mildly entertaining, but when real life humans subtweet, it just makes me nervous. Just be a considerate person and send that person a private message. No need to show off our salty prowess by pushing them under the bus in front of a bunch of followers.

I will vote for your baby once or twice as long as I don’t have to sign up for anything. But that’s it. I’m not going to support you pimping out your kid for money, because that’s just tacky.

Regularly updating the world about your diet

Your diet and nutrition is your own personal journey, and there’s no real reason to be sharing it with everyone else. If you’re into the whole accountability thing, start a health blog. I am totally sure there are people out there who want to know what you had for breakfast, lunch, and dinner every day, but those people are probably not your Facebook friends.

Posting misleading motivational quotes like, “You and Beyoncé Have the Same Number of Hours in a Day”

Psshhh. Beyoncé also has maids, assistants, probably a private jet or at least access to one, and probably more money in her bank account than many small countries. Of course time slows down for her. Let’s not make us mere mortals feel inadequate by forcing us to read unrealistic mantras that are supposed to motivate us or whatever.

Yeah. I’m sure the Caribbean is like, okay-ish, or your trip to Paris, France is so whatever. Ugh, get outta here.

More like this
Twitter Has *A Lot* To Say About The "Single Penalty”
By Sam Ramsden
These Are The Fastest Electric Kettles You Can Buy
By Margeaux Baulch Klein
11 Super Bowl Instagram Captions To Use On Game Day — Even If You Don’t Like Sports
By Alexis Morillo
Forestcore Is About To Take Over Your TikTok FYP
By Sam Ramsden
Get Even More From Bustle — Sign Up For The Newsletter
From hair trends to relationship advice, our daily newsletter has everything you need to sound like a person who’s on TikTok, even if you aren’t.