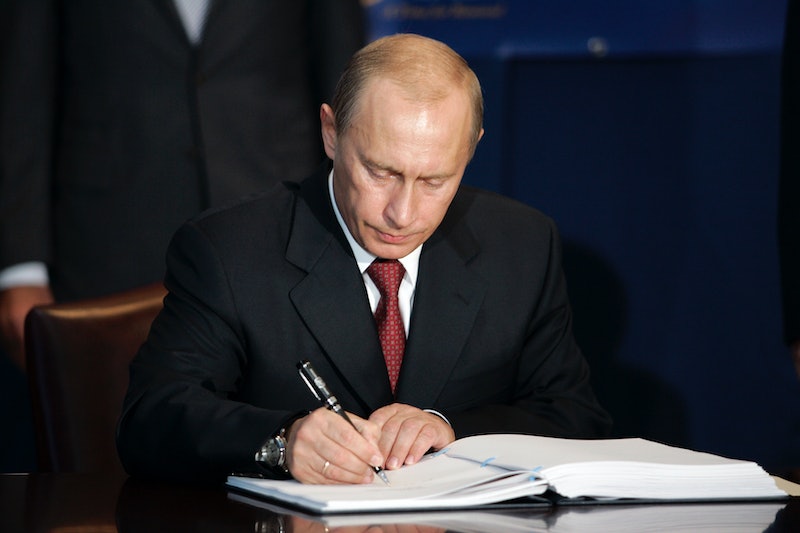 Russian President Vladimir Putin penned an op-ed in Thursday's edition of The New York Times, warning the United States to hold back on action in Syria. Now, as it turns out, he didn't actually write much of it — and the editorial's controversial stance on the Syrian chemical attack, which according to Russia was the fault of Syrian rebels, has incited criticism of its own.

"We're not surprised by President Putin's words," White House Press Secretary Jay Carney said in a daily press briefing. "It is also worth noting that Russia is isolated and alone in blaming the opposition for the chemical weapons attack," he continued. "There is no credible reporting, and we have seen no credible reporting, that the opposition has used chemical weapons in Syria."

Dear Putin aides: a little fact-checking wouldn't have hurt. All evidence appears to point to Syrian President Bashar al-Assad's regime orchestrating the chemical attack. Not to mention, the problem isn't so much that there's a chance the attack was carried out by rebels — the chance exists, but by all accounts it's minuscule. The problem is a lack of conclusive evidence itself, and um, warmongering.

The piece was initially pitched to the Times by a Russian PR firm, as it turns out. And while Putin dictated the content, his aides were actually the ones who "worked out the text," according to the president's spokesperson.

Still, the op-ed does hit home the point that, in spite of everything — cough, anti-gay propaganda bill, cough — it's been a very good week for Russian diplomacy. Since Secretary of State John Kerry set off a chain of events this week that ended up with Syria accepting Russia's offer to hand over their chemical weapons, the stage is set for America to look like the war-hungry bad guy — and Russia, the rational middle-man who sorted everything out.

Putin's editorial really hammers that point home. Though it's worth noting the chances of Putin allowing Obama to write a pro-America editorial in a Russian newspaper are laughable, Putin "writes" that U.S. exceptionalism is a risky mindset. Putin makes a strong point on that front. Here's the problem: there remains an underlying, glaring contradiction within his editorial. Which he didn't really write anyway.

The two points are in direct opposition to each other, so the editorial's argument loses a lot of its logical power. That said, what the piece lacks in logic and reason, it makes up for in political persuasion. It successfully pits Russia as the good guy, and takes subtle but effective swipes at the United States throughout:

In the United States, many draw an analogy between Iraq and Syria, and ask why their government would want to repeat recent mistakes... [There is] strong opposition from many countries and major political and religious leaders, including the pope.

Essentially, Putin is kicking the White House when it's already down: President Obama and his aides are still struggling for a response to the entire Syria chronology, and are trying to figure out how they ended up damaging their own reputation both inside and outside the Unites States.