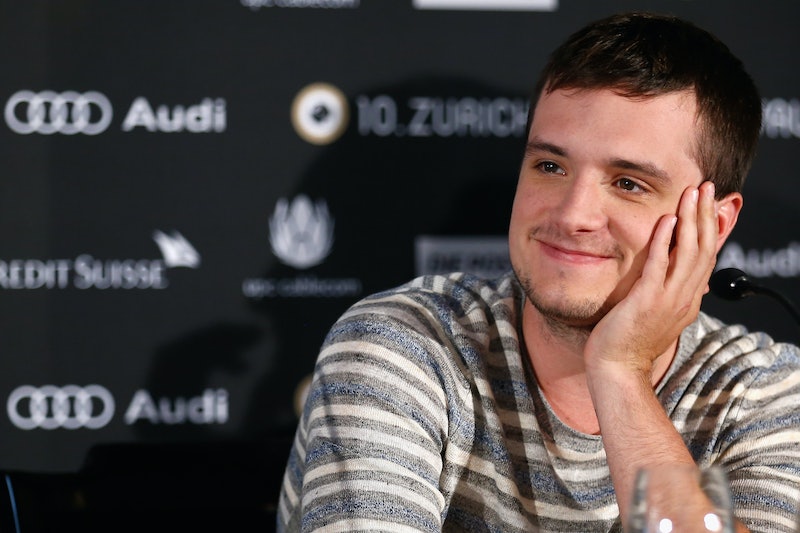 There are a few things that will stick with you after seeing The Hunger Games: Mockingjay, Part 1 . Many of them are thought-provoking questions about the eery similarities shared by the District 8 chaos and the ebola crisis in West Africa. You're left with questions about the importance of democracy. Questions about director Francis Lawrence's decision to include a scene in which a plane crashes into a tall tower. Then .... there are the silly things that can't help but needle into your brain after spending two hours staring at a screen like, damn, Jennifer Lawrence's wig looks very convincing, and hey, did Josh Hutcherson lose weight for Mockingjay ? Peeta looks very thin.

Hutcherson's skinny frame is important because I am ready to stand up and give society a long slow clap for not acknowledging a star's body size for once. You know how it normally goes — an actor or actress sheds pounds for a role and it's all we can talk about for months. In fact, we sometimes even praise them for their dedication to their craft, only to follow up with questions about their amazing diet. If we'd all somehow willingly ignored Hutcherson's weight loss, then dang, things really are getting better.

Alas, it doesn't look like that's the case. Society may be improving (we have phones we can wear on our wrists now, helloooo) but we didn't purposefully overlook the 22-year-old actor's weight loss because, well, there wasn't any. Yes, Hutcherson's Peeta looks close to emaciated in Mockingjay (and so does Jena Malone's Johanna Mason for that matter) but it's all movie magic.

During an interview with Good Morning Britain, Hutcherson admitted his weight loss was an effect.

I did nothing to prepare physically for this role. I went on the CGI diet, computer-generated images. They just sucked my face down in post-production.

There you have it, folks. With the move of a mouse and a stylus, our Peeta was shrunk down via computer cleanse, not juice cleanse. Mockingjay was filmed between Sept. 2013 and June 2014, so here's a picture of Hutcherson from November, 2013 where he looks healthy...

And here's a still from Mockingjay of Peeta after the Capitol has gotten to him:

As soon as the camera pans around to face Peeta, you can see his chest bones, collarbone, and nearly every bone in his body protruding. That CGI man, what a wicked, wicked tool. It almost made me believe in humanity, after all.

Mockingjay, Part 1 is in theaters now.