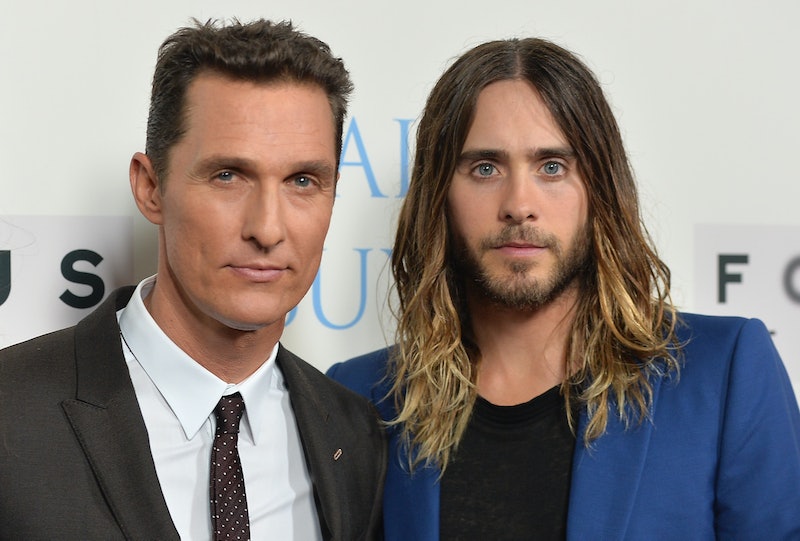 With Dallas Buyers Club hitting theaters this week, chatter about Matthew McConaughey and Jared Leto’s severe weight loss for the film is all anyone seems to be talking about. Both actors lost roughly 50 pounds to portray HIV-positive characters, so to be fair, it is the sort of weight loss that often causes alarm for friends and family. In order to achieve the feathery weight, McConaughey was reportedly ingesting only a few hundred calories a day – which is enough to mess with anyone’s ability to process thoughts and function normally. Still, while Dallas Buyers Club should be heralded as a film about HIV, the people who suffer from it, and the way in which one man was changed by it, the headlines just click better when the title is accompanied by the phrase “extreme weight loss.”

That’s because we are fiends for a weight shift story. Whether it’s someone slimming dangerously down, shedding weight from their previous, heavier shape, or (gasp) gaining weight while the public watches, celebrities are hounded for it. When they experience a weight shift due to life rather than art – see Kate Middleton’s post-baby flat stomach, poor Kim Kardashian throughout her pregnancy, and Britney Spears every day of her post-Kevin Federline life – the ability to gawk unabashedly at a celeb hinges on your willingness to view a celeb as nothing more than an object of fancy. Most of us see the issue with over-analyzing weight issues and feel guilty going overboard when chattering on about them, but when a celebrity’s body shifts for a role in a film or television show, we’re suddenly given license to obsess.

Celebrities in these situations are often willing to discuss their weight loss or weight gain measures (McConaughey’s been open with every reporter who’s asked about his methods) more so than a celebrity who is losing weight due to poor health or gaining unwanted weight for reasons they’re uncomfortable with. Still, it’s fascinating that despite every other aspect of a film like Dallas Buyers Club, which gained positive attention on the festival circuit after premiering at the Toronto Film Festival in September, the main talking point continues to be the most superficial piece of the film.

It’s a fate that’s befallen plenty of films before Dallas Buyers Club. In 2003, when Charlize Theron won an Oscar for portraying a prostitute and serial killer in Monster, with many people obsessing over her “astounding screen makeover” and promoting the insulting notion that when women “go ugly” they get Oscars. When Christian Bale slimmed down for The Machinist, he suffered a similar fate to the point that the 2004 film’s title is still more synonymous with the term “extreme weight loss” than “psychological thriller about insomnia.”

Then there’s the endless talk that accompanied footage of Mila Kunis and Natalie Portman in Black Swan, for which both actresses slimmed down to “ballerina weight.” Portman’s transformation ran with headlines that read “shocking” and when Portman finally told reporters that the process took “discipline,” we were dramatically told Portman was “opening up” as if she had some tragic secret to tell.

True, all of these films got their due praise from critics and other artists in the industry, but their long-lasting mark on pop culture will always be as the “movie where so-and-so lost 20-plus pounds” (or in Theron’s case, gained 30 pounds). Many films get a similar one-note rep – World War Z will always be the movie that almost didn’t get made and Zero Dark Thirty will continue to be the movie that greatly vexed the federal government for months. However, when physical appearance is the main topic of discussion, it begins to take the chatter into a potentially dark area.

The age-old issue with Hollywood culture is that an actor’s physical form is constantly praised beyond his or her other talents. It’s what leads to asinine studio requests like the one that plagued Jason Segel when he was asked to lose weight in order to play Emily Blunt’s chef fiancé in The Five Year Engagement because he was told “that it had to be conceivable that Emily Blunt would ever choose [him] to be her husband.” It’s why a headline like “How Being a Teen Actress Almost Gave Me An Eating Disorder” is disheartening and sad, but not altogether shocking. We know full well that the entertainment industry is body obsessed and that it’s detrimental to the well-being of those who buy into it.

And when an actor in a film shifts his or her weight for a role, all we’ve managed to do is find a way to legitimize that detrimental conversation that inevitably comes about whenever a star’s body changes. Yes, McConaughey risked a lot to play his role in Dallas Buyers Club. Yes, it took perseverance and strong sense of duty to the film to accomplish that. But once we’ve cleared that up, shouldn’t the main conversation be about his actual performance in the film and not the way his cheekbones protrude or the way his shirts drape over his shoulders? After all that hard work, doesn’t he deserve to be praised for accomplishing the true goal of his transformation?

Now that the film is out, and we’ve all got the ability to actually see it, let’s drop the weight conversation and talk about what’s most important here: the art. After all, that's the whole reason McConaughey and Leto lost the weight. And just think: your choice to appreciate it properly isn't nearly as painful as the severe dieting these men endured, so just do it.