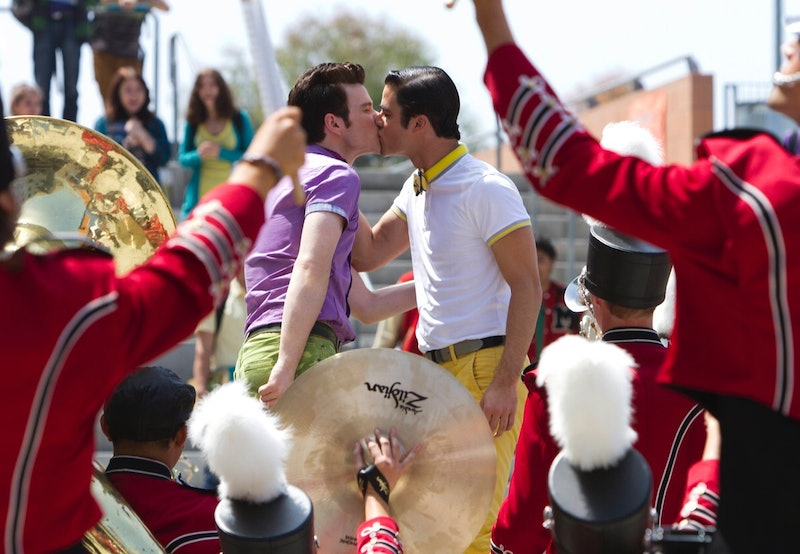 Can you believe that Fall 2014 is blowing by so quickly? Back when Glee Season 5 was ending, it seemed like Gleeks would have to wait a lifetime before the midseason premiere of the sixth and final season. Of course, that may have come as a relief for some Gleeks after spoilers about Season 6 started to roll out. I mean, I can pretty much wait forever to hatewatch Blaine hooking up with Karofsky, thank you very much. However, despite all of the spoilers, there was one important question about the final season that was going unanswered for far too long: when does Glee Season 6 premiere? And when does that 13-episode run end? Brace yourself, Gleeks, because there's good news and bad news.

Let's start with the good news. The Glee Season 6 premiere will air on January 9th at 8 p.m. — and it's going to be two hours long. That's right! Two episodes of Glee for the price of one, to reward us for waiting this long between seasons to catch up with all our former Lima-trapped performers. The Season 6 finale will air on March 20th at 8 p.m. and that's also going to be a two hour special to send Glee off in style. So, basically, of the thirteen episodes of Glee that we have to look forward to the final season, four of them will air in two-episode bursts that will guarantee that you'll be glued to your couch on the weekends.

And therein lies the beginning of the bad news. Glee is moving to Fridays for its final season. For those who aren't savvy about the inner workings of the TV world, the infamous Friday night death slot is usually seen as a "graveyard" slot because, hello, it's Friday. Who on earth is going to willingly be in their house when it's the first day of the week that they don't have to get up early for work the next morning? Usually, if a show is airing on Friday between the hours of 8 p.m. and 11 p.m. then there are either no high hopes for it to succeed or it's about to be cancelled. In fact, Fox is the next work most famous for its Friday night death slot, which has spelled trouble for shows like Dark Angel, Prison Break, Dollhouse, and, most recently, Utopia.

In addition, Glee's Season 6 isn't taking any breaks at all in its broadcasting — which means from January 9 to March 20, you'll be able to watch a new episode a week. Which sounds great, until you realize that only gives us 11 weeks of Glee before the show is off our television screens forever. (Or until reruns or syndication, but whatever.) I don't even know how to feel about this, you guys. On the one hand, I want to be excited to finally get my satisfying conclusion to the epic love story that is Klaine (and everyone else can be happy, too, I guess), but on the other hand I'm not sure I'm ready to say goodbye to Glee — even if it's been steadily declining in quality since, say, Season 1. Still, it's good to know that I now already have Friday night plans from January to March. Going out on the weekends? Pfft.