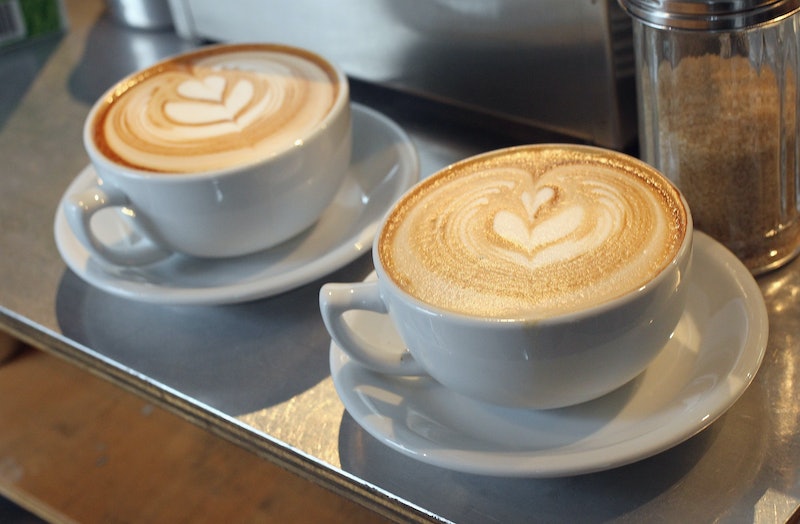 A few bucks here and there for a cup of coffee on the go might not seem like much — but have you ever wondered exactly how much you spend on coffee? Good news (or bad news, depending on your point of view): Personal finance site Mint has some answers in the form of a handy infographic. Spoiler alert: It’s probably too much. Just, y’know…FYI.

Over the summer, we talked about the rising cost of iced coffee — but even when you’re back to drinking the hot stuff in the winter, it still adds up over time. According to the data seen here, most Millennials between the ages of 18 and 34 spend almost $25 a week on coffee from their favorite coffee shops. There are just about 52 weeks in a year, so guess how much a $25-a-week cup of joe habit amounts to annually? $1,300. That’s…kind of a lot.

By this point, you probably know that the first Starbucks holiday drink appeared in 1986 (blah blah Eggnog Latte blah blah) — but you know what hadn’t occurred to me until just now? Maybe the reason Millennials are so gung ho about their seasonal coffee beverages has something to do with that year. Think about it: Millennials and the Eggnog Latte came into being at roughly the same time, give or take a few years depending on the person (I was born early in ’85, so I predate the drink by not quite two years). As long as we’ve been around, Starbucks’ holiday drinks have been around; ergo, they’re in our blood. Or something. Anyhoo, it appears that Drake, Lindsay Lohan, and the Olsen twins were also all born in 1986, so do with that what you will.

So how can you save a few bucks? Well, you’ve got a few options, but the no-brainer is just to brew your own java at home. One pound of ground coffee costs on average about three times more than a 12-ounce cup of regular Starbucks coffee — but it yields a whopping 26 12-ounce cups. And when you consider that most specialty drinks cost somewhere in the neighborhood of four of five bucks? The choice should be obvious. If you need a few pointers, For Better Coffee has a fun little interactive that will teach you how to brew better coffee in five easy steps — and if you really can’t do without your holiday beverages? Try getting in the habit of making those at home, too. It’s not that difficult — I promise. Here are some peppermint mocha recipes to get you started.

Check out the full infographic below. New Year’s resolution, anyone?