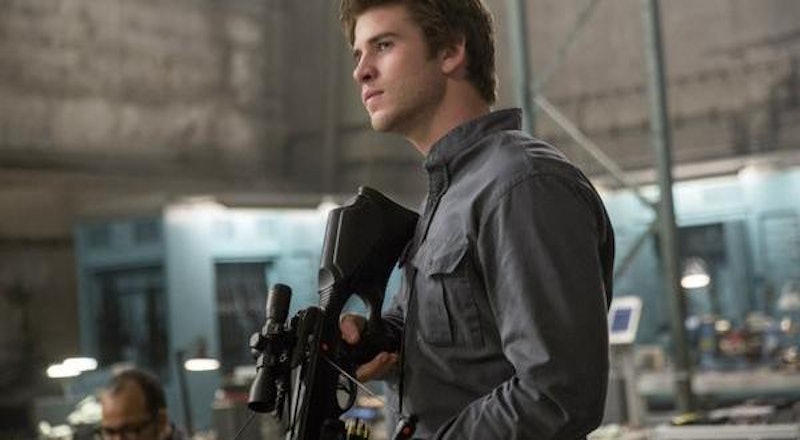 There is nothing — nothing — that makes me angrier than when The Hunger Games series is treated as a story purely about a love triangle, but even I will admit that the love story between Katniss and Peeta is an underlying theme of the movies and the books. Another theme? The fact that Gale has deep, unrequited love for Katniss, and even though she knows this, Katniss totally takes advantage of Gale's feelings for her, and it's not fair, especially because Gale is awesome in his own right. Katniss and Peeta are obviously a better fit, romantically speaking, but that doesn't mean Gale wouldn't make the best boyfriend ever.

Gale said it best: "You only kiss me when I'm in pain." And that kind of treatment is just what he gets in return for making sure that, even in the midst of a scary and violent revolution, her world continues to spin. But that doesn't mean I wish she'd fall in love with him instead, because that wouldn't be doing Gale any favors. In fact, Gale doesn't need Katniss at all. He needs someone who will return his feelings and treat him right, and any Panem lady would be totally lucky to have him for all kinds of reasons.

OK, not the best argument, but still a valid one. After all, isn't attraction an important part of the foundation for any relationship?

He has a great heart

Do you know how I know this? Because now matter how often Katniss tries to stomp on it, he still bounces back, ready to do whatever he can for her. Maybe this makes him a pushover, but I think it would also make him an excellent boyfriend.

Katniss and Peeta both have had moments where they've admitted how scared they are, and considering what's happening around them — whether they happened to be in the arena or not at the time — nobody would blame them, and I certainly don't hold their fear against them. But Gale has been up against some seriously dangerous odds himself, and never once do we see his courage falter. He deserves more credit for that.

No food? No problem. Gale could totally hit the woods and provide dinner for your date night. Not so much a concern in our society, where there's a Chili's on every corner, but this is a huge advantage in Panem.

Gale has never been under any illusions that Katniss actually has feelings for him, but he cares for her family regardless. Who was the one who checked her family's compartment to make sure Prim and her damn cat were okay? Oh, right, that would be Gale, while Katniss cried in the stairwell.

He will do anything for someone he loves

Gale loves Katniss, so he was the first to volunteer to risk his life in fetching Peeta for her from the Capitol. It certainly isn't going to help his cause to have lover boy back around in District 13, but since it will make Katniss happy, he's all for it. Wait, why doesn't Katniss piss people off more? I feel like the more I think about it, the more I don't like her. Hmm.

He doesn't whine nearly as much as Peeta does

Because let's face it: Peeta's a wuss. In fact, Katniss spends more time mollycoddling him than anyone else. Even Prim and Rue are scrappier than this guy. No offense, Peeta. I do hope you make a recovery from that whole hijacking thing.

Again, no offense, Peeta, but I never saw Beetee ask you to help him create weapons. Just saying.

And he's a great listener

Katniss spends an inordinate amount of time obsessing over Peeta directly to Gale's face. Almost never does he complain, despite the fact that this probably puts him through a significant amount of emotional distress. More points for Gale!