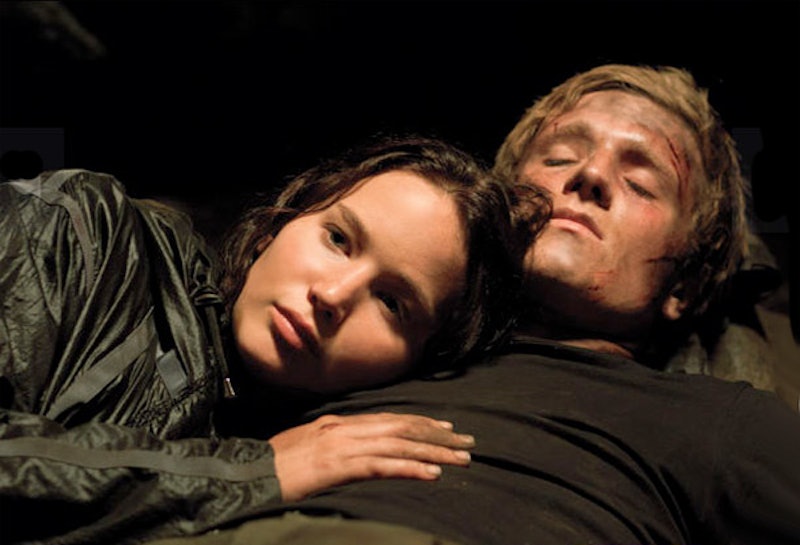 If you asked someone to describe the main themes of Mockingjay, it's not likely that "romance" would be one of the first words out of their mouths; and that's probably a good thing. It's nice to see a YA novel that isn't 100 percent dedicated to the love triangle. But even though the book is primarily action and drama-filled, you can still learn a lot of lessons about dating from Mockingjay . It's possible some of that will get lost when the movie version comes out, or it's possible the romance angle will get amped up. But either way, after reading the novel, you leave with some pretty good dating tips, if you know where to look.

The cool thing about The Hunger Games series is that the goal was not for Katniss to get a boyfriend, but along the way to saving her country, it's something that happens naturally. And in that journey, the reader is given some helpful dating advice.

And believe me, I'm not patronizing the story. I love that Suzanne Collins is exploring poverty of the people vs. the wealth of the ruling class. But just because the book explores wider political issues doesn't mean it's wrong to enjoy the romance portion too. I'm a staunch Team Peeta girl, but I don't think rooting for his and Katniss' happy ending makes me understand the deeper aspects of the book any less.

Besides, good dating advice is hard to come by and I'll take it where I can get it. Especially if the lessons are as important as the ones in Mockingjay are. [Spoilers ahead.]

YOU DON'T NEED A MAN TO SURVIVE

The highlight of the whole novel for me is when Gale and Peeta are talking about which one of them Katniss will choose. "Katniss will pick whoever she thinks she can't survive without," Gale decides. But this attitude makes her angry because it makes her sound cold and selfish. "It's a horrible thing for Gale to say, for Peeta not to refute," she says in the book. "Especially when every emotion I have has been taken and exploited by the Capitol or the rebels. At the moment, the choice would be simple. I can survive just fine without either of them."

Amen, sister. It's one of the book's best feminist moments. Katniss doesn't need either man, and she can take care of herself.

CHOOSE SOMEONE WHO COMPLEMENTS YOU

Not to be confused with someone who compliments you. Both are good of course, but Katniss is able to find true love with the person whose attributes bring out the best in her. At the end of the novel she realizes that she doesn't need more fuel added to her fiery spirit, she needs someone who can calm her down.

What I need to survive is not Gale's fire, kindled with rage and hatred. I have plenty of fire myself. What I need is the dandelion in the spring. The bright yellow that means rebirth instead of destruction. The promise that life can go on, no matter how bad our losses. That it can be good again. And only Peeta can give me that.

There's a reason "opposites attract" is a cliche. If you find someone too much like yourself there's no balance to the relationship.

A trend I notice far too often is people punishing their significant other for the tiniest of things. Giving the silent treatment because they didn't do the dishes like they said they would. Blowing up over an ignored text message. The reality of punishing someone is that no one wins. You're angry, and they're angry now because you're freezing them out. Katniss spends far too long being mad at Peeta for his hijacking. It's only after she stops punishing him that they grow back together. She starts talking to him, and they work things out in the end. Communication is everything in a relationship.

DON'T TAKE WHAT YOU HAVE FOR GRANTED

Only after Peeta is hijacked does Katniss realize what a good thing she had. "It's only now that he's been corrupted that I can fully appreciate the real Peeta," she says. "The kindness, the steadiness, the warmth that had an unexpected heat behind it." Don't be like Katniss and wait until something is over to appreciate it. Live in the moment when it comes to relationships, and never take another person's affection for granted.

I think it's kind of sweet wehen a couple has their own unique way of expressing their love for one another. Anyone can say "I love you." But when you have your own words for your feelings, that makes it even more special.

FIND SOMEONE WHO HAS YOUR BACK

Gale and Katniss may not have stayed together, but they did demonstrate a very important thing: having your partner's back is essential. For Gale and Katniss this meant relying on and trusting the other person to protect them during hunting. But the lesson can easily be translated to today. You want to be able to trust your S.O. and count on them. If you can't, they're not worth your time. In the end that's what breaks Gale and Katniss up for good: she can't be sure he didn't make the bomb that killed her sister. She had lost trust in him, and that was the final blow to their chance at love.

TAKE NOTICE OF THE LITTLE THINGS

When Peeta and Katniss are rebuilding their relationship post-hijacking, Peeta can only hang on to the smallest of details. But ultimately that's what brings them back together. He remembers that Katniss' favorite color is green, he remembers tossing her the bread and that the next day she picked a dandelion.

She reminds him of what she knows about him, too, saying, "You’re a painter. You’re a baker. You like to sleep with the windows open. You never take sugar in your tea. And you always double-knot your shoelaces." It's the small things that make someone unique and help you fall in love with that person.

YOU DON'T HAVE TO SPLURGE ON GIFTS

Dandelions are weeds to most, but Mockingjay gave them a whole new meaning. To Katniss they were sustenance when she was starving: a symbol of hope. She'd probably take a bouquet of them over roses any day. Besides, roses are expensive; so save yourself some money and pick a more meaningful bloom to give.