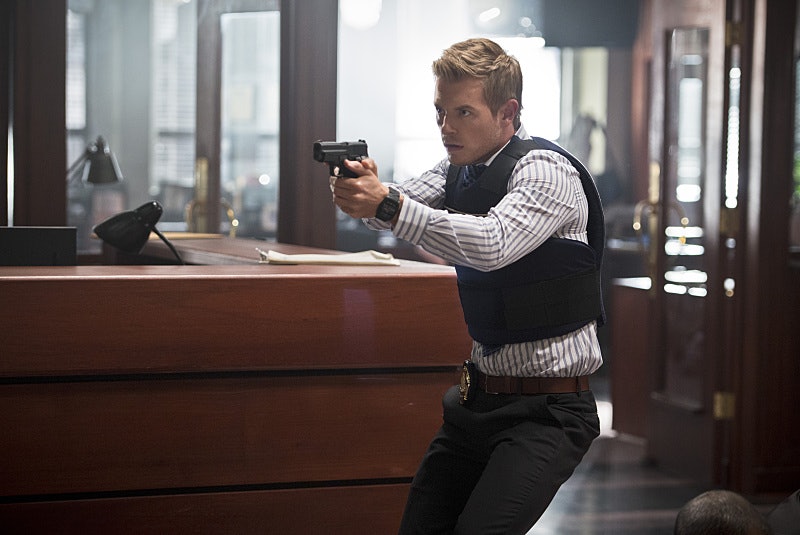 Before The Flash even started, I had made up my mind to dislike Eddie Thawne, and with good preconceived reason. His last name seemed to let on that Eddie might one day become Barry's long-lost twin brother (just go with it). With the last name "Thawne," it also suggests that Eddie could be The Flash villain Professor Zoom — you know the guy who most likely murdered Barry's mother in that streak of lightning he keeps talking about. So clearly going into this first season of the show, I was ready to dislike him so much, if only because if his surname. As we get further and further into The Flash's growing backstory and comic mythology, it seems possible that Eddie could be a villain after all.

But, there's one small problem: I like Eddie so much! I don't want him to be a villain. Now seven episodes into the show, Eddie is such a nice guy. He really likes Iris, and he's vocal about how he doesn't like that Iris and Barry are fighting — a true sign of an actual keeper. However, the folks behind the greater world of Central City have something in mind planned for the character, because they wouldn't waste the name "Thawne" on someone unimportant, right? The name Thawne is one piece of a bigger Flash puzzle, and it's time to start getting to the bottom of it. Actor Rick Cosnett even told DC Comics that the "Last name’s obviously synonymous with a lot of darkness. A lot of bad. I think that’s going to be the intrigue of the whole thing. To see where these characters go." Eddie's good right now, but he might not stay that way for long.

There are two ways Eddie could become Professor Zoom: one, Barry manages to really irk him and send him into a supervillain spiral; or, he's already Professor Zoom from the future.

The Flash may be Barry's origin story, but we're going to see the beginnings of all these other metahumans and villains too. The show is setting up a nice little love triangle between Barry-Iris-Eddie, and it will only continue to grow, and probably get more complicated. Eddie knows that Barry and Iris are close, yet he doesn't feel threatened. Which totally means that if/when Barry ever professes his undying love for Iris, it is really going to make Eddie mad. So mad, that he could fall into a villainous rage, seek revenge, expose himself to radiation for metahuman powers, etc. He could end up doing what we all assumed Tommy Merlyn was going to do over in Starling City — fall to the darkside after being crossed by the vigilante.

Or, Mr. Thawne could already be Professor Zoom and he's doing a very good job of hiding it. When Eddie first rolls into town, pre-reactor explosion, he's new to the city and his backstory is shrouded in mystery. His backstory is still shrouded in mystery. Aside from the fact that he's dating Iris, do we know anything about him, for real? He let on a little bit in "The Flash is Born" about how he used to get beat up as a kid, but so far that's been the only glimmer into his life. His whole nice guy persona could simply be an act. His entire relationship with Iris could be an act to get closer to Barry.

However the rest of Eddie's story plays out, there's still a lot left for us to learn about him. His last name is a huge tell, and it'll be interesting to see what actually comes of it. He might be the bad guy Barry's been looking for all along.