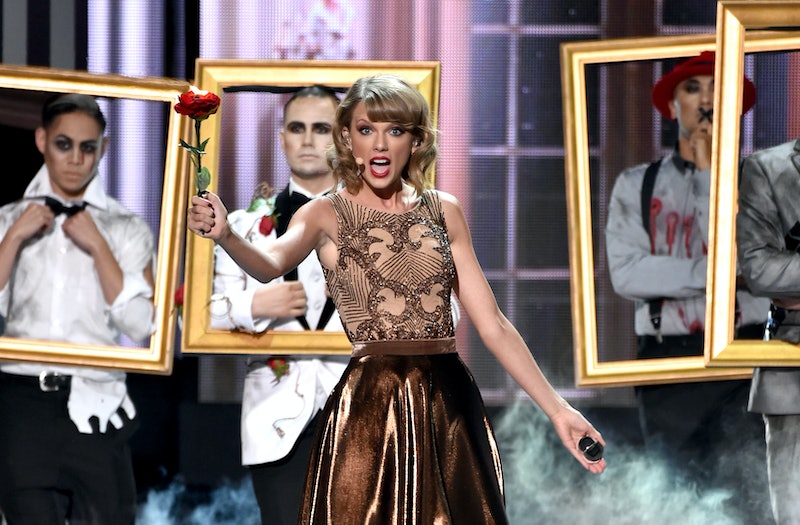 If you were thinking that Taylor Swift's "Blank Space" isn't your favorite song, the 1989 singer just changed your mind. Because Taylor Swift's first live performance of "Blank Space" at the 2014 American Music Awards was a nightmare dressed like a daydream — in the best possible way — which has probably led you running to download her new album. Even though I can't imagine HOW you've been surviving without it all of this time. Seriously, this performance might be the only thing better than Swift's Blank Space Experience mobile app — because it essentially was her Blank Space Experience app and the "Blank Space" music video, just live. And because Swift's "unhinged ex-girlfriend" face is the best thing you've ever seen in your entire life.

Swift's been knocking her live performances of 1989's tracks out of the park lately — if you haven't heard her perform "Out of the Woods" live, you're missing out. But T Swift's "Blank Space" at the 2014 AMAs was even better than we've seen her before, with the added bonus of the song's possible inspiration, Harry Styles, sitting in the audience. Of course, Swift had backup vocals, but the points where her voice came through, she was excellent — especially when you consider how she was shoving guys and poisoning them throughout the performance. Oh, and, obviously, when she held fire in her bare hands. Move over, Fiona Goode.

But the real shining star of Swift's first live "Blank Space" performance was her ultimate "I'm the craziest ex-girlfriend of all time" face. I'm going to go out on a limb here, but Swift is the queen, and we should all bow down. Just look at this face: