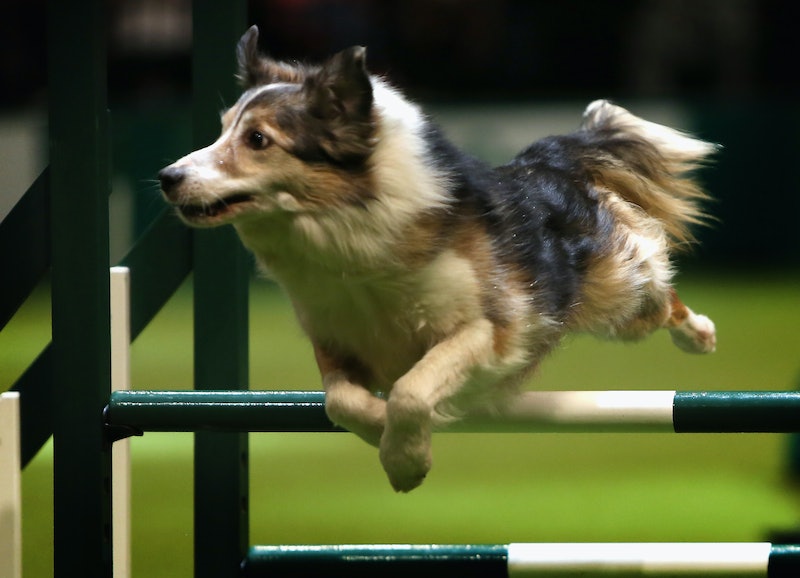 The event, hosted by the Kennel Club of Philadelphia (and presented by Purina), airs Thanksgiving on NBC at 12 pm. (The actual show took place over the course of two days on Nov. 14 and 15.) And it turns out that the title Best in Show is really the main enticement. After some serious internet investigation (meaning two or more Google searches), I have discovered that the winner of The National Dog Show gets to go home with the coveted title — and $1,000. I guess that buys quite a few Scooby snacks?

For those unfamiliar with the intricacies of dog shows (guilty as charged), the Kennel Club of Philadelphia does help explain how the dogs are judged. To win Best in Show, the dog must first win Best in Breed (which they say there can be more than 100 dogs entered in a particular breed). The 150-plus American Kennel Club-sanctioned breeds that compete in the show are then broken into seven groups — terrier, toy, working, sporting, non-sporting, hound, and herding — and out of the Best in Breed awardees, one dog is awarded First in Group for each of those categories. Then, the Best in Show is picked from one of the First in Group winners. Last year, Jewel, an American foxhound, was the first dog in the hound group in the history of the show to take home Best in Show.

(As a refresher, the foxhound from Fox and the Hound.)

On The National Dog Show's Entrant Information page, they say, "$20,000 in prize money is awarded at The National Dog Show Presented by Purina." But that didn't really make it clear how much each winner gets (but I do feel alright in assuming that pet-food company Purina may be providing at least some of that said money). And we're smart enough to know that "prize money is awarded" is different than the winner getting $20,000.

John Oliver has taught me how bogus the claim that the Miss America organization ("the world's largest provider of scholarships for women") gives $45 million in scholarships every year. (Just because $45 million is "made available annually" does not mean they are actually awarding $45 million.) But as non-specific as The National Dog Show initially seemed about the monetary winnings they give to their dog owners, they are nowhere near as shady as the Miss America organization. Plus, it feels less wrong to ogle dogs and judge them on their appearance than it does to do the same to women. But, I digress.

Wait, So How Much Do Winners Really Get?

Last Week Tonight with John Oliver also taught me it's worth digging to get the info you need (I'd have to say the dogs would agree), and so I found a cash prize breakdown. The Best in Show dog winner takes away $1,000, while the First in Group winners get $500. (Which makes me wonder, if your dog gets Best in Show, they have to be First in Group — so does their prize money keeping adding up and they really walk away with more than $1,000?) Either way, I think it's safe to say that the people who enter their dogs into these type of competitions aren't in it for the money. (Also good to note: the "Winners Bitch" gets $15 — I can't make this crap up, folks.)

I am happy to know that people aren't pimping out their dogs for huge cash prizes — but it does seem slightly odd that the winners don't get more money, considering how much money it probably costs to keep your dog competition-ready. But along with the title, the press the Best in Show winner gets could also be worth it (and perhaps Purina provides some free products to the winner as well, which I'm sure the dog appreciates more than the money, which does not taste anything like a Beggin' Strip).

As for the viewers at home on Thanksgiving, the prize is getting to see impressive (and adorable) dogs prance for us. And is there anything greater to be thankful for? (Uh, yes. But let's just focus on the dogs for now.)