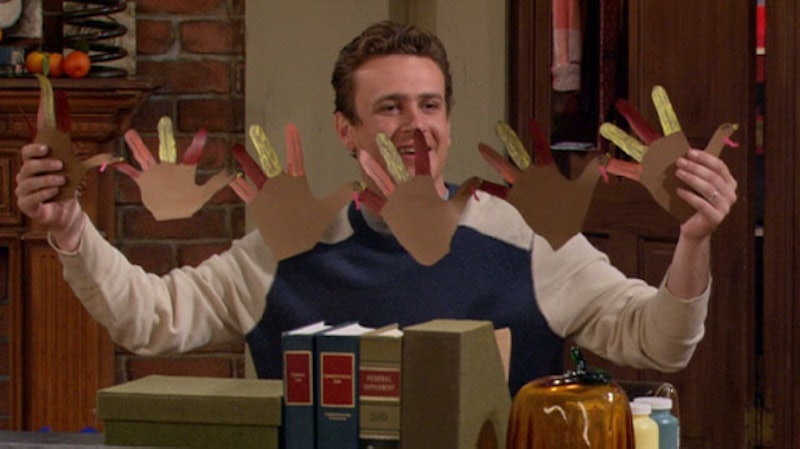 When discussing Thanksgiving-themed episodes of my favorite shows, there is one fact that cannot be denied: Friends is the reigning champion of celebrating Turkey Day the right way. But let's not forget about the show that takes a close second, How I Met Your Mother. Also I absolutely refuse to open up the wound that was last March's series finale, I can't deny how well HIMYM did Thanksgiving. In Ted and Marshall's apartment, it wasn't just about the food — it was also about the booze, putting up with obnoxious family members, and of course, the slaps. What's Slapsgiving without the very real fear of a slap bet?

Over the show's nine seasons, five dedicated an episode to Thanksgiving, and they did not let me down. When you're tired of watching Ross and Monica duke it out for the Geller cup (if it's even possible to get tired of it), feel free to turn to Netflix or your HIMYM DVD collection for an extra dose of Thanksgiving wonderfulness. There's something for everyone: Mild violence, romantic drama, and even the occasional board game.

Here are all five How I Met Your Mother Thanksgiving episodes, ranked from least legendary to most legendary.

Ted's determined to create the "turturkeykey" — a turkey with another turkey inside of it. So he leaves the bar early to prep for this epic culinary feat, and becomes The Blitz, AKA the guy who leaves early just before something awesome happens. In this case, Zoey (Ted's ex-girlfriend and the Captain's wife) shows up at Maclaren's and the gang ends up having a great time without Ted, as proven by the total disarray of just about everybody in the apartment the next morning.

This is a pretty good episode, but anything with Zoey in it loses points, because she was The Worst. Also, of all the Thanksgiving episodes, this is the least Thanksgiving-y. Boo!

"The Rebound Girl" is easily the most emotional Thanksgiving episode ever. Not only do Marshall and Lily decide to move into the giant house they inherited from Lily's grandmother, but we also get to meet the baby that Barney's brother, James, and his husband adopted, and is there anything more adorable than Neil Patrick Harris holding a baby? No, there is not.

And after Barney sneaks in through the bathroom window, we find out that Robin thinks she's pregnant, and we all know that this ends up in a pool of tears after her predicament leads to one of the saddest episodes of How I Met Your Mother ever.

It's been two years since Barney received the third of his five slaps for losing their slap bet, and after receiving Slap Bet Commissioner Lily's permission, Marshall gives Robin and Ted the honor of deciding when and how Barney's getting that fourth slap. Meanwhile, Lily's estranged father shows up, and she doesn't want anything to do with him, but Marshall invites him to Thanksgiving anyway, and eventually, Lily realizes how important it is to spend time with her dad. Barney's slap gets traded around as an act of good will, and it ends up back with Marshall... and inadvertently inspires Lily's dad to invent the official "Slap Bet" board game.

This episode gets points for warm and fuzzy family togetherness, which is what Thanksgiving is all about. Also, slaps. Slaps are awesome.

Lily goes back to Minnesota with Marshall to spend Thanksgiving with his family, and she's super out of place among all these tall, outdoorsy folks. Not only does she not want to change her last name after she gets married, but she definitely doesn't want to give birth to a twelve pound baby. Totally freaked out, she leaves, and ends up at a convenience store to buy a pregnancy test. She's not pregnant, though, and she and Marshall end up having a pretty good Thanksgiving.

Also amazing: Barney and Ted go to a strip club called the Lusty Leopard, where Ted meets a stripper named Tracy. He jokes with his kids that that's how he met their mother... and eight years later, that joke makes sense when we find out that their mother's name actually is Tracy.

The greatest Thanksgiving episode in How I Met Your Mother history, mainly because it introduced the official Slap Bet song, "You Just Got Slapped." Barney spends the entirety of Thanksgiving stressing out about Marshall's countdown to the next slap, and we find out that even in the future, Ted brings his kids over to spend Thanksgiving with Lily and Marshall. It also introduced one of my favorite running jokes in the show's history: Ted and Robin's salute every time someone says an expression that begins with a military rank like "major" or general."

More like this
Jesse Tyler Ferguson Had A Funny Run-In With A Fellow ‘Modern Family’ Alum
By Grace Wehniainen
“The Door Is Always Open” For Another 'Breaking Bad' Spin-Off, Says AMC Boss
By El Hunt
What Is the Net Worth Of Each 'Stranger Things' Season 4 Cast Member?
By Hugh McIntyre
Kimberly J. Brown & Daniel Kountz Looked Back On Their ‘Halloweentown’ Romance
By Stephanie Topacio Long
Get Even More From Bustle — Sign Up For The Newsletter