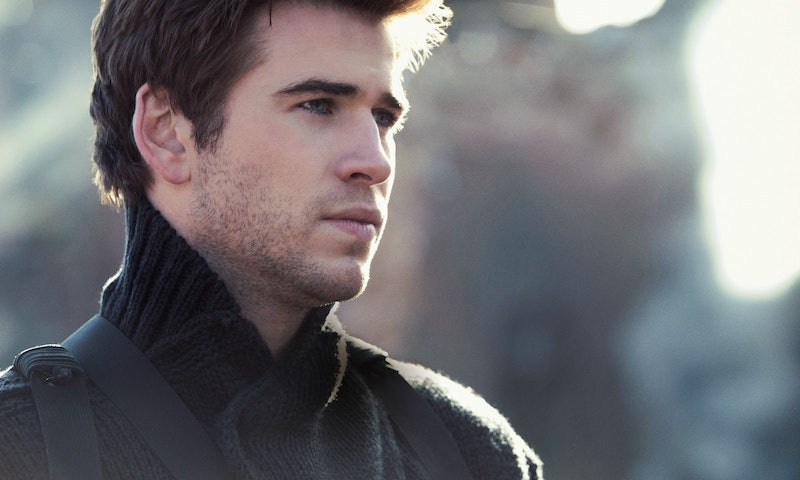 There is some serious tension between Peeta and Gale in the newest Mockingjay Part 1 trailer. There always was when it came to Katniss because both men liked her. But now that the whole of Panem is at stake, Gale is not holding back his anger at Peeta any longer. After Peeta calls for a cease fire Gale spits, "I'd rather die than say what he just said!" Gale takes the war effort seriously and it's no secret he is mad that Peeta is being a rebel traitor. In Gale's eyes it probably looks like Peeta is reading the pro-Capitol lines to save his own skin—or still trying to protect Katniss by agreeing to be the Capitol puppet in exchange for her safety should the rebels lose.

But to Gale this traitorous act is unforgivable and it's the first time in the trailers we've really seen this Team Peeta vs. Team Gale attitude. Everyone has a favorite and I'm definitely Team Peeta. But I wouldn't be Team Gale even if Peeta wasn't in the picture because I think Gale represents everything Katniss disagrees with.

Way back in The Hunger Games we first see a flash of Gale's dark, violent side when he tells Katniss she has a chance of winning because she's a hunter. Katniss points out that she's only hunted animals, not people. "How different can it be, really?" asks Gale.

But things escalate quickly in Mockingjay and the reader gets to see just how violent Gale is willing to get to win the war. The fact that he's mad that Peeta dared to be a traitor to protect Katniss makes me wonder if given the same choice Gale would sacrifice Katniss for the sake of the cause. [Mockingjay book spoilers ahead.] It's not out of the question because he gets pretty intense in the book. With each moment you can see Katniss grow more upset but of course it takes the instance with her sister and the bombs at the end of the novel for her to realize that Katniss needs Peeta's calmness, not Gale's fire.

But honestly, I'd rather have Katniss end up alone than end up with Gale because his fight scares me—and it should definitely scare her. Take, for example, all the traps he was designing with Beetee. They were beyond cruel, preying on the compassion of others.

Booby-trapping an area that provides something essential to survival. A water or food supply. Frightening prey so that a large number flee into a greater destruction. Endangering off-spring in order to draw in the actual desired target, the parent. Luring the victim into what appears to be a safe haven—where death awaits it ... A bomb explodes. Time is allowed for people to rush to the aid of the wounded. Then a second, more powerful bomb kills them as well.

But at some point Gale leaves behind the hypothetical tinkering and puts one of his plans in action. When trying to destroy the command center in District 2, he readily offers a permanent solution: cause a landslide that would block the air vents, killing everyone inside. Author Suzanne Collins writes, "His intent, his full intent, becomes clear. Gale has no interest in preserving the lives of those in the [center]. No interest in caging the prey for later use. This is one of his death traps."

Gale has a lot of anger in him, and rightfully so. He lost his father, spent years starving, was forced to work in the mines, lost Katniss, etc. But his anger manifests in a dangerous way where he doesn't care who else has to die to get the revenge he wants. That's not someone I think Katniss should be with. She has enough rage on her own without needing to add his to the mix. To me, the choice is easy. It's Team Peeta or Team No One. But Team Gale was never an option.

After all, Gale may be willing to die for the cause, but he's also willing to take a lot of others down with him in the process. Katniss can't and shouldn't be with someone like that.