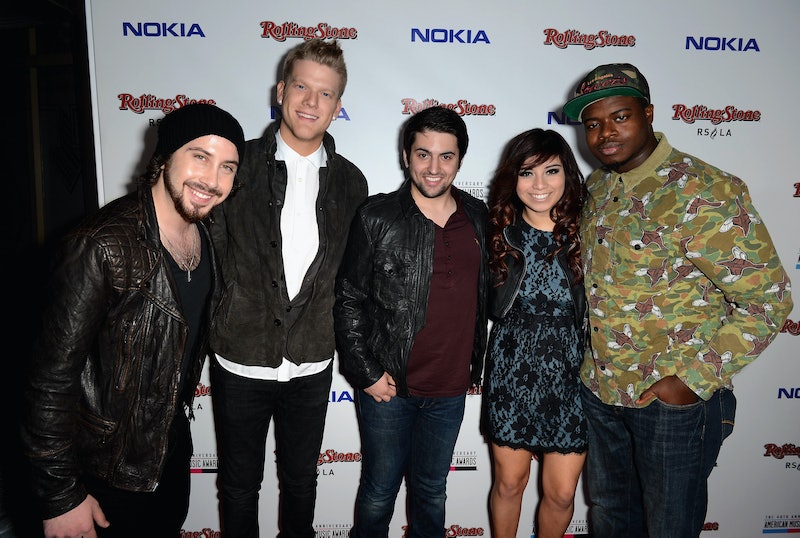 It's finally happened. Thanks to Pitch Perfect, a capella is cool again! And no group makes a capella any cooler than the amazing Pentatonix. From singing classic songs to the best new hits in the most clever ways, Pentatonix is quickly becoming a household name. And they're making my love for a capella (and previous involvement in a capella groups) totally and completely legitimate. Pentatonix appeared at the American Music Awards red carpet and brought about the holiday spirit a few weeks early when they sang "Santa Claus Is Coming To Town" from their holiday album during their interview with E! And despite singing a relatively corny holiday song (no offense Santa!), Pentatonix completely killed it. They brought a much needed spark to the relatively uneventful AMAs red carpet proceedings.

The group was incredibly adorable while talking on the carpet about their experience appearing in the Pitch Perfect sequel. Considering the new film's trailer follows the Barden Bellas to the world a capella championships, I can only assume that one of the great groups competing in the championships is Pentatonix. Seriously, have you ever seen their rendition of Beyonce's music through the years? It's insanely incredible. And they brought that same greatness while performing a holiday classic that, frankly, has gotten a little stale over the years. Check out their impromptu red carpet performance below.

Pentatonix also talked about their adorable holiday plans (apparently they enjoy spending time away from each other for a little while, like any healthy group or family members) and argued a little bit about whose mother is the better cook. Hopefully the group will be around a lot longer in the music world, but that shouldn't be too difficult since they have a lot of passionate fans. Many AMAs viewers took to Twitter to share their love of Pentatonix after their surprise performance.

The holiday album from Pentatonix, "That's Christmas To Me," is out now, and if it's anything like their music from the past, like "Evolution of Music" and much more, it's probably completely and totally worth it. And here's the "Evolution of Beyonce" from October 2013 for your bonus viewing pleasure.