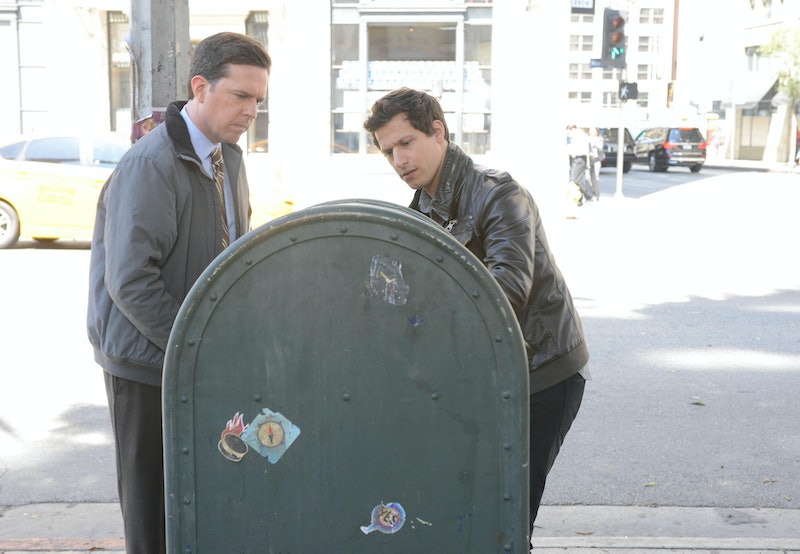 There have been some fantastic guest stars so far this season of Brooklyn Nine-Nine , including the fabulous Kyra Sedgwick, the cool Eva Longoria, and even a surprise appearance from comedian Sandra Bernhard. But all of them pale in comparison to Ed Helms, who plays an agent of the United States Postal Inspection Service during the Nov. 23 episode. Who knew the United States Postal Service could be so exciting?

Well, as we see during the episode, it's not actually. Though Helms plays a man named Jack Danger, his cool-sounding last name is actually pronounced like "Donger" and is Dutch for "prudence in financial matters, in case you were wondering. And yes, this last name is a running gag throughout the episode. How did you know?

As you can imagine, the dullness of Danger's last name applies to the man, who has an affinity for John Philip Sousa music and reading pamphlets. This banality also applies to the agency in which he works, confirming most of our suspicions of what it's like to work for the Postal Service. They still use the traditional snail mail method of communication, or "real mail" as Helms' character refers to it. The USPIS office technology is antiquated, using one of those old printers, you know, the ones that make those high-pitched noises as they laboriously crank out a page.

Needless to say, the young, hip, and reckless Jake is not a fan of Danger, especially when Rosa forces him to team up with the guy to track down the suppliers of the Giggle Pig drug on the streets. I totally get why Jake didn't want this dude's help. He was a total bore whose methods seemed too timid and archaic to get the job done. "I can't imagine anyone being more dong than this guy," Jake says during the episode. Jake's so right. No one could ever be more of a dong. That's why Jake decides to go it alone, with Boyle's help, to track down the bad guys. But as you might have already guessed, it's when they embrace the Danger that they really save the day.

This whole experience would have been totally unpleasant to watch if it wasn't for the wonderful Helms' guest turn on Brooklyn Nine-Nine. He plays the straight-laced, serious characters with so much earnestness and sincerity that you just can't help but buy into but also recognize its absurdity, prompting instant laughter. I want to hate Danger, but Helms makes him just so lovably stodgy that I can't. He plays the awkward guy that doesn't realize he's awkward so beautifully, I couldn't imagine anyone else in this guest role. I hope to see you again, Mr. Postman.